You are here: Home / Music / News / “We’re in this sort of weird boundary and blurred area between things”: Hyperdawn discuss Art School Live, their debut album, and DIY instruments 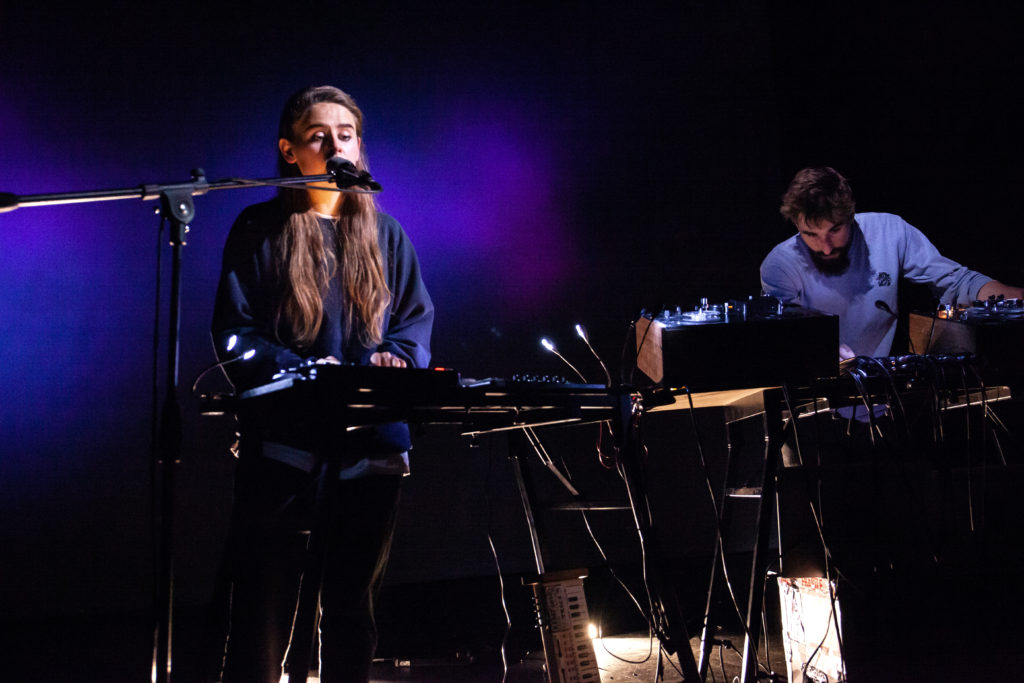 Hyperdawn, comprised of Michael Cutting and Vitalija Glovackyte, first crossed paths in university. After working as solo musicians, they eventually joined forces as a duo based on experimentalism. As a result, their unique sound is a genre-defying blend of pop, smooth synth, and electronic sounds.

The Manchester-based musicians use various unconventional and even homemade instruments to create their ‘broken pop’ sound. Hyperdawn creates this through fluttering static and hybrid-pop synths using modified keyboards, tape machines, and their own twelve-stringed ‘beast’. Throw in delicately soft but almost hauntingly melodic vocals from Vitalija, and their distinctive sound grows within this frenzy of synth, keys, and ambient noise.

In 2019, the release of their debut album ‘Bleach‘ met warm critical acclaim. Both regional and international radio, including BBC Radio 3 and Berlin Community Radio, have featured their songs. Hyperdawn have performed their music in various grassroots venues across the UK, EU and North America. The pair have played in local spots like Manchester’s Soup Kitchen, but they have also demolished venues like Berlin’s Rotor Salon.

aAh! Magazine caught up ahead of the streaming of her performance at the first Art School Live [ASL] Festival, which took place last month on YouTube. We discussed the story behind Bleach, their unconventional instruments, and playing their first gig with an audience since the pandemic began.

For people who have never heard this type of music before, how would you describe your style?

Vitalija: “We’ve been debating this for three years!”

Michael: “It’s kind of for other people to judge. We make songs with that gear to explore digital and analogue things together, exploration [of sound] is the point of our live shows.”

What is the story of Hyperdawn; how did you two become a duo?

Michael: “Just over there in RNCM! I was in my final year, and Vitalija had just started. We both studied composition, not electronics, just writing for classical instruments. So, we started putting on gigs first as a group, and we were just trying to make an interesting night of other people’s music.

“Then we got approached to write a commission basically – both of us, because we were kind of doing the same thing, but we were asked separately for this thing to write a piece. I think they wanted us to perform, but we’re composers, so we’re not used to playing at that point. I don’t think we’d done any performances ourselves.”

Vitalija: “But we’d always wanted to.”

Michael: “We’d played [the] piano and things when we were younger, but we were just composers. We’d sit in the audience. We just thought it would be interesting for this project – why not try and do something together? So, we came up with a little set with some tape machines, just as a one-off little project, and the project went quite well.

“We enjoyed doing it it, we kept taking that piece, and we thought, ‘Why not do other pieces?’ And Hyperdawn came from there really. It wasn’t like, ‘Let’s make a duo and spend all of our energy on that’, it kind of gradually developed into that.”

So, what made you want to get involved with Art School Live?

Vitalija: “We saw some friends had a performance with this project, and we thought, ‘Oh, that’s really good!’ Then coincidently, Evan got in touch with us. It was so exciting!”

Michael: “Yeah, we came across it at the same time we were approached, but we didn’t know about it much before that. It’s a really nice project, particularly because it’s really decent video documentation, but it [ASL] still feels like a live event.”

What do you think about the fact that this is a student-led event?

Vitalija: “I think it’s great! The event felt really fresh, and we were really excited. There’s a sense of [she makes a whooshing motion] because everything is really fresh and new.”

Michael: “Also, because it’s part of a course, so everyone is doing it as part of their modules. But in a way, it feels like they’re almost more on it than people in the real industry. They have to really do it because they’re getting marked on the result, so it felt like we were well looked after despite everyone being students.”

How did you find the performance; was it strange not having a live audience?

Vitalija: “Yeah, of course. I think speaking to Michael and speaking to friends, I think everyone really misses that live experience. But live music is all gradually coming back. It’s so nice to see things popping up even though they’re socially distanced, but still, it’s so reassuring that things are going back to normal.

“Having said that, I think it was so amazing to have the whole crew in front of us. It was just nice to play to people because we have had a few lockdown sessions, but they were done at home. So, we were just talking to the deep abyss of the internet, but yeah, it made a massive difference.”

Michael: “Yeah but, it’s still not a gig gig. We still didn’t have that reciprocation from the audience, so it was a bit strange. We’ve done something like this before, but all of the things put together we’re not used to performing. We’re not even used to socializing, you know physically, being near people – it was a bit alienating, but we got through it!”

What was it like working with Joe Beedles your visual artist?

Vitalija: “Joe is an old friend, and he was the one who designed all the lighting, so it was just a no-brainer for us to approach him for this.”

Michael: “We had the option to go to anyone, but we’re quite particular about what we think works. We’d been in discussions with him a lot anyway, and because he did the lights, it made sense that he didn’t obliterate his own lights with the visuals. So he can work around what he’s already done for us.”

Vitalija: “Yeah, so he really gets us, and we get him so it’s a nice little mash!”

So, I saw online that you make some of your instruments?

Vitalija: “We have some DIY instruments, but we haven’t used them tonight. We have a twelve-string instrument, which I play on a track called ‘Plastic’. That was built from scratch. I say it’s a plank with strings, but it has pickups and a rod that controls the tuning so you can re-tune it yourself.

“We have some modified things as well, for example, in Bleach, we use a Casio PT-80 keyboard which is a monophonic synthesiser. There’s a small company in Essex called S-Cat, which is run by a couple who modify old synthesisers. We sent off a simple PT-80 Casio synthesiser, and we came back with a beast!”

Michael: “That synthesiser is the smallest instrument we have yet it has the beefiest sound! Anything that’s ‘standard’, we tend to use it in a different way, so the tape machines obviously are meant to record, but we use them as like a live instrument. We explore and experiment with a lot of stuff to come up with our own sounds.”

What is the plan for you in the future – any upcoming gigs or events, new music?

Vitalija: “We’re planning our second album at the moment. We have sort of eleven sketches that we’re hoping to finalize into tracks over [the] summer. So hopefully, come this autumn, we’ll be able to release again. We have some long-term projects, solo and as Hyperdawn but that’s…”

Vitalija: “Then we have a mini version. We’re collaborating with an ensemble from London as Hyperdawn, and we’re creating a performance that we probably will tour. That’s going to be created over a year and a half. We’re constantly in touch with people who run venues, and people we had already agreed to have gigs with, but then Covid happened.

“We just keep rescheduling and re-thinking, but things are bubbling underneath the surface, we feel there are loads of things coming up but it’s when to do it all because there’s still so much uncertainty.”

Michael: “We’re not super keen to go straight into it [live performances] now that we can, but I think a lot of people will anyway, so we’ll let that happen. But also, we’re not quite ready – we wanted to do a few more new tracks for this event, but they just weren’t quite there. One of them we really tried to shoehorn in, but it wasn’t ready. We just want to wait until the new album really, like around September I think we’ll release the album then have some shows.”

As a duo from Salford, would you say that Manchester and North West is the place to be as aspiring musicians; do you think it’s a good starting point?

Michael: “We need to update that as we’ve actually moved house. We’re in Moston now, so we’re in proper Manchester! But we both came here to study, and we both didn’t leave.”

Vitaljia: “We lived in Salford for 11 years, and that really shaped us, didn’t it. Like Islington Mill and Caustic Coastal, we’ve done quite a few things [for them]. The community as well we were close to them.”

Michael: “It’s just a very vibrant, welcoming, and inclusive place. We’ve done all these other shows, and these cities sound great; but when you get there, it just lacks something. There’s something about Manchester that feels like the right balance of stuff.”

Thank you for talking to me, is there anything else you’d like to say to our audience?

Vitalija: “Keep on keeping everyone, the end is nearly here! Thank you for having us. It was so nice to just do this…”

Michael: “To be a band again!”

Check out Hyperdawn’s full performance at day two of Art School Live below!

Hyperdawn will be performing at the White Hotel, Salford on Saturday 25th September buy tickets here for their next upcoming live show! Check out their debut album ‘Bleach’ on Them There Records, and follow their Facebook, Twitter, and Instagram channels to stay in the loop.