You are here: Home / Culture / Entertainment / Interview / Manchester / Music / “A lot of the album is kind of about that unknown within yourself”: Natalie McCool discusses her Art School Live set, her upcoming album, and the Memory Girl project 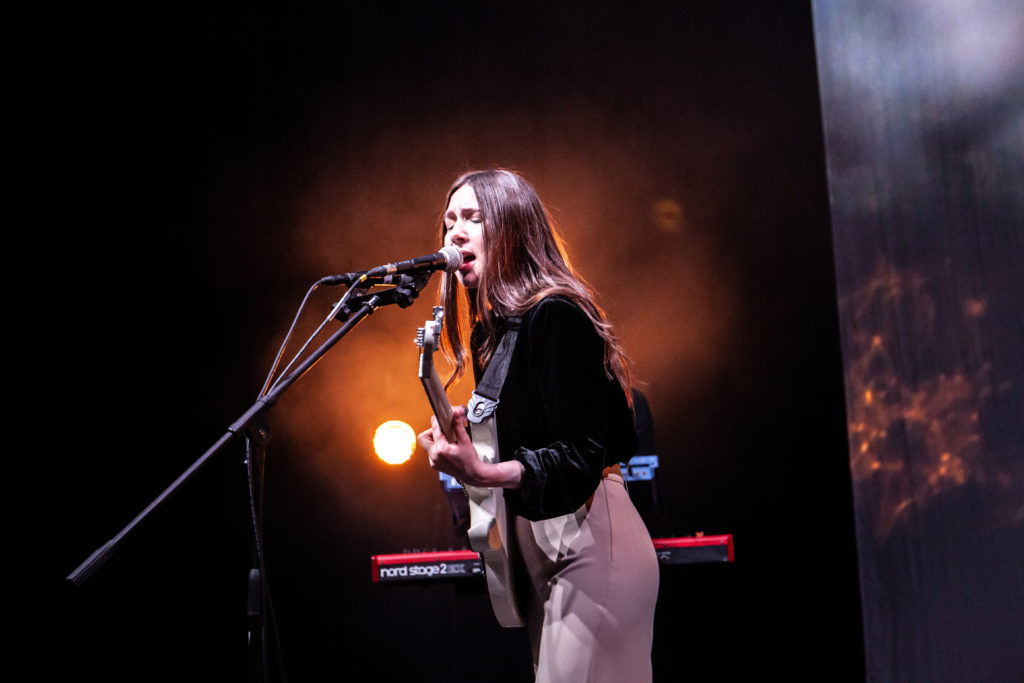 Liverpudlian goddess of alt-pop Natalie McCool was first inspired by her father as a child to embark on her musical journey. After hearing him play the guitar when she went to bed, the sounds of old blues songs encouraged her to pick up the instrument herself. Thus, sparked the beginning of McCool’s signature electrifying indie-speckled pop sound.

McCool’s explosive guitar riffs serve as the perfect base for her lyrical expertise, as she explores themes of monotony from the pandemic, her memories from her childhood, and personal growth in her learning curve. Her songs feature refreshingly raw honesty, packaged in a delightfully gripping indie-synth-pop present for your ears.

Her upcoming third album ‘Memory Girl’ is highly anticipated following the release of the epic singles, ‘Heaven’ and ‘Take Me to Your Leader’, which feature beautiful visuals based around the theme of mirrors by Robin Clewley. McCool has performed her addictive indie hits across the globe, from the Café Underground in South Korea to the Krizis Zhanra in Moscow. As well as tearing up local venues in her hometown and across the North West, her music is a feel-good force to be reckoned with.

aAh! Magazine caught up with McCool ahead of the streaming of her performance at the first Art School Live Festival, which took place last month on YouTube. We discussed the making of her upcoming album, her take on live streaming events, and being starstruck over Alice Levine.

What inspired you to become a musician?

“My dad plays a little bit of guitar, not professionally, but he would always play guitar when it was bedtime. So, I would just listen to him when I was in bed and he would play The Police, Eric Clapton, and old blues songs. That probably got me going on guitar really. I love PJ Harvey, but I only discovered her later on in my life. She’s just an incredible artist and such an inspiration so, probably, PJ Harvey.”

How did you find the performance?

“We were all a bit terrified because it was the first live performance back [after the lockdown.] I think Dave, the drummer, said this is the first time we’ve been in front of people since last August.”

Do you see live streams gaining a permanent place in the music and events industry? And how do you feel about that?

“I think so, I was thinking about this the other day, and I think that it’s location-based, isn’t it? If you can’t afford to tour – especially now with Brexit, and all the kinds of visa situations, artists may not be able to afford to tour. The only way to reach their fans would be a live stream; I think they will be more popular now.

“People before lockdown were like, ‘Live stream? I’m not doing that.’ But now because that’s all we’ve had, people are okay with it and are like, ‘You know what actually it’s worth it.’ So, I think they will.”

What made you want to get involved with Art School Live?

“Well, this is kind of an interesting story. I teach music workshops for a Manchester charity called Brighter Sound. One of my contacts who I work with doing the workshops was like, ‘Oh you’d be great for this thing that my friend is running.’ Then he just put us on email; and that’s how we got started. I used to live in Manchester, so it feels really close to me, so yeah, it’s really nice.”

What do you hope Art School Live can do for you?

“That’s a really good question. I think having a filmed session online is just a really cool thing to have, isn’t it? I guess when people film at gigs it’s always on, like, a shaky iPhone – but something that you’ve worked so hard on for so long, you should get that properly filmed and recorded so that people can watch it.”

What was the inspiration for using the beach footage during your set?

“So that’s some of the footage from the songs which is called ‘A Sun Going Down‘ and that was one of the singles from the album. I live in Liverpool which has Formby Beach which is this amazing beach; so, we decided to go there and shoot some footage. We didn’t really plan it, but we turned up and it was an amazing sunset. We were like, ‘Wow. We’ve really got this; we got this good!’ So that was kind of the reason behind the footage, and we thought it was a really nice, ambient footage to have.”

How did you find lockdown; what effect did it have on your music?

“I’ve spoken to a few other artists about this, and there’s been kind of varying levels of productivity from everyone. I think a lot of people, myself included, at the start were just kind of… There was no stimulus or anything so it was just kind of hard to draw on stuff to write – stuff that’s not to do with Covid. But things are still happening to you, it’s just not as wide or as big as usual. I did find it hard at first, but then I just kind of got into it.”

What is your favourite track from the album?

“Oh gosh that’s really hard. There’s a track called ‘Tongue Tied’, which I don’t play live, and I don’t think anyone’s really heard it yet. I think that’s probably my favourite one, it’s a bit crazy because there’s lots of stuff going on in it! But ‘Tongue Tied’ it’s kind of about social anxiety, and feeling like everyone is just looking at you and you’re like, I don’t know what to say. A lot of the album is kind of about that unknown within yourself.”

So, you’ve been on Radio One’s playlists a few times, how did that feel?

“Yeah, it was great, it was a BBC Introducing playlist! I had a track from the last album which was called ‘Cardiac Arrest’ that was like the track of the week, so they played it every day. Yeah, it was really good, really cool, like, really weird because they did a phone interview with me. I think it was Alice Levine, and that was really mad just to be chatting to her!

What’s the plan for you in the future? Any upcoming gigs or events?

“The album is called ‘Memory Girl’, but there’s no track on there called ‘Memory Girl’, there’s no title track. The album is about my own memories and experiences, but I’ve launched the Memory Girl project. I’m going to write a title track which is going to be released after the album as a standalone single. It’s on my website, you can send in any kind of memory or any experience, like an inside joke you’ve got with your friends, or what was your first day at school like, or how did you meet your partner? Any funny stories, just anything like that. I’ve had loads of responses already.

“So, I’m just gathering all the stuff and using that as inspiration for the title track that’s going to come out after the album. I think we’re going to do a tour next year for the album. I’ve got some festivals coming up like FocusWales and FestEvol which is a Liverpool festival, and Kendal Calling on the day that the album is out so that should be good!”

Finally, would you say that Manchester and North West is the place to be as aspiring musicians; do you think it’s a good starting point?

“Although London is great, but you can just get the train or work online. Like I’ve done loads of Zoom sessions with other artists or other writers. There’s loads of stuff, and Zoom is great. I think lockdown has forced people to think about how they can keep as relevant with not being somewhere in the heart of something.”

Check out Natalie McCool’s full performance at day one of Art School Live below!

Natalie’s album will be released on the 30th of July and is available to be pre-ordered in vinyl format for the first time ever! Pre-order also available for CD and digital versions. Natalie’s newest single ‘Take Me to Your Leader’ is out now!