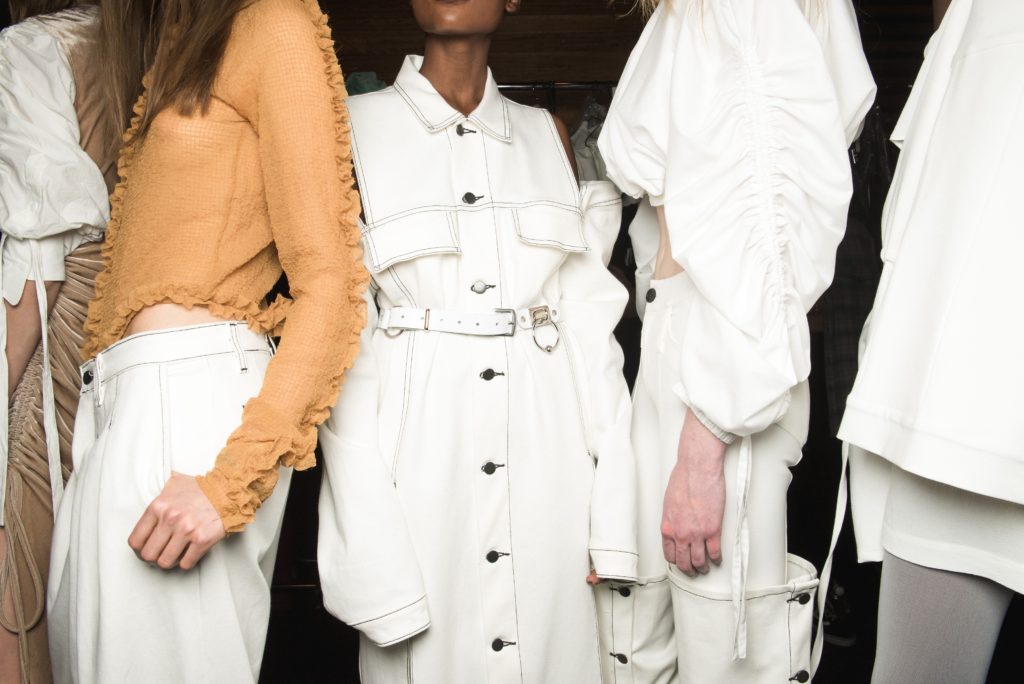 Fashion Week in Paris for haute couture has concluded for Fall/Winter 2021/22. The show became one of the most anticipated shows of the year due to Balenciaga’s return to couture after the closure of their couture houses in 1968.

Although the pandemic still rages on, international travel has returned, mainly for those vaccinated, and social gatherings/events are being reintroduced. Due to these circumstances, restrictions remained in place, so there was a mixture of digital and in-person viewings of the shows, such as Maison Margiela’s film A Folk Horror Tale.

Here is a breakdown of the best looks of Fashion Week.

The 5th of July commenced with Schiaparelli’s aptly named, ‘Matador Couture‘, with the show’s main stars being Daniel Roseberry’s take of traje de luces. The chaquetilla jackets displayed the eccentric over-embellishments of traditional chaquetilla’s but were reimagined with Schiaparelli’s surrealism, which created an androgynous femme look showcased in the contrasting exposure and adornment of the breasts, and the exaggeration of the sleeves.

This was also visualised in other suit looks which seemed to emphasise a modern feminised take on the zoot suit. Gold being associated and symbolic of traje de luces were especially enhanced in the chaquetilla’s of look one and four. It was also seen throughout the collection, whether it was using lamé or, alongside embroidery techniques and materials synonymous with Elsa Schiaparelli’s style.

With Schiaparelli we cannot forget jewellery, Roseberry has done well to mimic the surrealist costume jewellery that the Maison is well known for, and continued to do so in this collection. Looks 11, 15 and 25 are particularly interesting when looking at the jewellery which was incorporated into the garments. Look 11 intertwined a gilded brass necklace in the shape of trompe l’oeil lungs which laid across the breast, acting almost like a bustier and was magnified by the simple fitted dress and the structured shoulders to frame the necklace. Roseberry’s creative direction has kept the Maison highly anticipated, while keeping Schiaparelli’s legacy respected and modernised.

Iris Van Herpen’s ‘Earthrise’ collection brought her signature combination of art, technology and fashion, and embodied it into this cosmic collection. The Empyrean and Magnetosphere dresses were especially eye-catching with their intricately cut designs that seemed to imitate the textures of the coral reef. These dresses were created in collaboration with paper sculpture artist, Rogan Brown, and used Parley Ocean Plastic fabric, sourced from up-cycled marine debris. Other notable pieces were the Earthgaze, Sphaera, Eclipse and Blue Marble dresses which were made of laser-cut, gradient-dyed spheres and hand-stitched together, these displayed a mosaic effect that followed the shape of the body. This effect was also seen with the Aerology pieces. The collection illuminated its terrestrial aim whilst obeying Van Herpen’s vision of femininity and the female form.

The following day finished with the Giorgio Armani Privé show, ‘Shine’, and shine it did. Speaking to Vogue, Armani said: “I am happy that we will be presenting this in front of a live audience because I think that all the impalpable and floating shapes need to be seen in a real environment and on a moving body to be fully appreciated.” Watching Armani’s show digitally was entrancing too due to their use of silk organza coupled with the signature ‘filtrage’ technique, which provided a mesmerising exhibition that allowed the fabric to do the work.

Additionally, the clothing conformed to the models’ bodies whilst reflecting the light, creating a truly ethereal effect. Some of these garments were reminiscent of the movements and glow of jellyfish, the use of peplum and pleating was what gave off that look and further intensified the fabrics luminosity, this was especially present with looks 30, 44, 49 and 57. The fuchsia silk organza dresses were the best at demonstrating the shine of the fabric and its vibrancy through the live stream. The robes du soir from looks 49 to 62, added additional texture to the collection with the silk organza carefully dyed for each dress and draped, layered, cut, and pinned into shapes that would most reflect the light and express their fluidity.

Day three’s most anticipated show was of course Balenciaga’s, marking its 50th couture collection and the first couture collection since the closing of its couture branch in 1968. This daring show by Gemna Gvasalia paid homage to Cristóbal Balenciaga’s legendary works whilst committing to modernity and his style. Tailoring was one of Balenciaga’s chief arts and was worked into the collection well, with the evening coat and the cape dress of early 1960s Balenciaga had been reinvigorated. Gvasalia’s couture takes on robes was also seen in looks 50, 52 and 54. These aspects of the show really showcased where heritage meets streetwear in true Gvasalia flair.

Look 62 seemed to be inspired by Cristóbal’s 1957 wedding dress and was revamped as an evening gown. The embroidery was done in collaboration with Maison Lesage, while the final robe, de mariée, picked up where Balenciaga left couture in 1967, revisioning that same wedding dress into one for the modern woman, with the hat swapped for a waist-length veil that also draped over the face. The lack of music in the show created a hauntingly intense atmosphere, a feeling that was transmitted through the live stream. All eyes were on the clothes. Philip Treacy’s lampshade hats littered the collection and continued the moody tone of the show. Not a bad start to Balenciaga’s couture revival.

We saw Viktor & Rolf’s ‘The New Royals’ collection and said on their site that the inspiration came from: “the new generation of royals and their attempt to show a human reality behind the facade of an institution.” They went on to say: “Fashion, like the monarchy, has its own hierarchy, its courts, its power alliances and its Kings and Queens. The world is obsessed with royalty, perhaps even more so than with fashion. Both require putting on a show, and this show must always go on, no matter what. A perfectly imperfect juxtaposition between what is real and what is fake.”

The intentionally gaudy series hosted exceptionally constructed, beaded, and embroidered dresses, coats and sashes as well as shapes reminiscent of their 1999 Russian doll collection. The avant-garde robes used raffia to make a fur-like texture and many pieces adorned with large embellishments of reignited Swarovski crystals gave off a messy but cohesive vibe. Look seven, for example, had a complex textured fabric that is formed into a classic sleeveless dress with a straight neckline and short train but, it was embellished with a variety of crystals and a braided neckline with pearls lining the braid. Though it felt like a visual overload, it still looks seamless. Look five is also a structured dress like seven, but in a baby doll style, yet similarly adorned with garish crystals on a brocade fabric.

If you haven’t heard of Kerby Jean-Raymond and his brand Pyer Moss, you have now. Finalising the entirety of Paris Haute Couture Fall/Winter, was the Black American designer delivering a powerful runway example of Black excellence with the show titled, ‘Wat U Iz’. The show was introduced by a speech from former Black Panther Chairwoman, Elaine Brown, and then the show commenced with a performance by 22Gz; whilst models come out decorated in garments inspired by African-American pioneering and inventions such as, look 19 taking inspiration from the Hot Comb invented by Annie Turnbo Malone.

The opening of the show was a bottle cap skirt dress and was the beginning of literal displays of black-made products or products improved by black people who were either forgotten over time or never given credence. The show was not completely saturated with exaggerated art pieces, looks eight and 17 exhibited traditional tailoring and structure. The final look also conformed to the figure using the wig/veil/train of hair in curlers to really highlight its significance. It was a runway to remember for its social and political importance.

This year’s Fall/Winter couture showed us that despite recent challenges, many couture houses have endured, taking the time and created stunning pieces. Resounding successes included the intricacies of the Schiaparelli collection and the fabric detail of Armani’s. The surrealism and intertwining of the events of the last year into awe-inspiring pieces such as those by Iris Van Herpen and Pyer Moss are some of the most memorable works. The over-embellishments of Viktor & Rolf’s collection were also eye-catching and of course, Balenciaga’s return was a must-see.