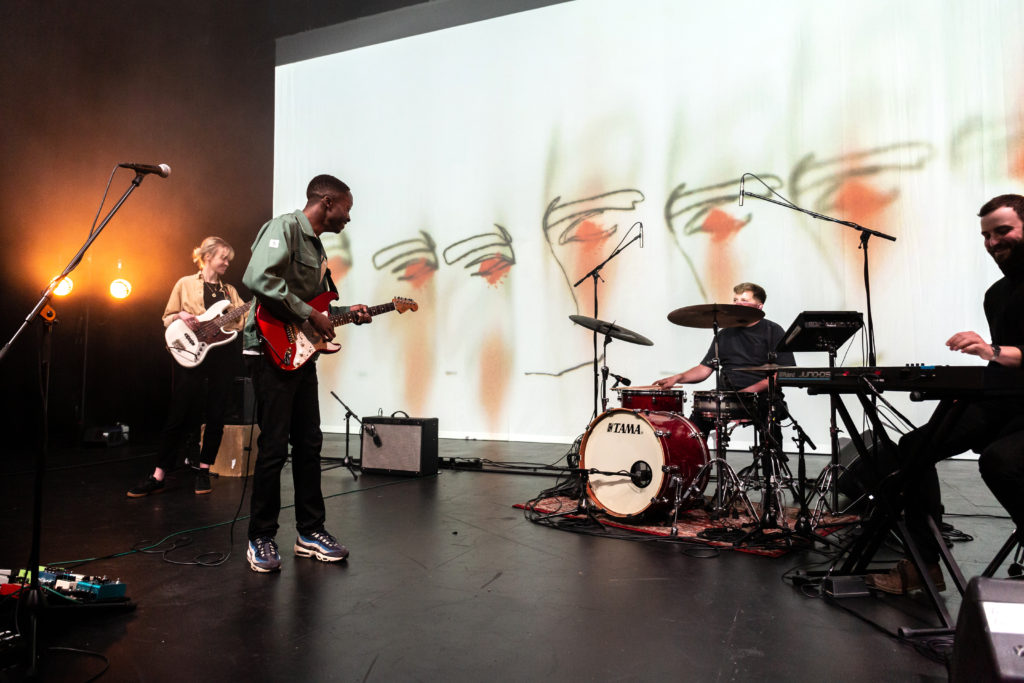 After the smooth flow and residual excitement leftover from day one, the second instalment of the Art School Live festival had a lot to live up to. But the continuation did not disappoint. The blend of live and pre-recorded performers and visual artists fused seamlessly with an incredible display of student showcases. Combine this with an abundance of charisma from BBC legend Shell Zenner, and the festival was a recipe for greatness.

The first live performance of the evening came from the electropop guru Alfie Sky, who opened her set with the delightfully upbeat tune ‘Dandelion’. Her homemade playful beats and distorted synths, layered with her velvety soft vocals, made her set exceptionally danceable.

Alfie’s performance included visuals by artist Amber Denneny, which featured quaking music notes and flitting shapes layered under an assortment of words that perfectly matched the theme of the lyrics. The entire sequence was a perfect throwback to the likes of a retro arcade game. As her set drew to a close, I’m not sure what stood out the most – her groovy electro-sounds or her florescent baby pink jumpsuit. But yes, I’m still wondering what a Fosn is…

From the get-go, Nii’s playful demeanour indicated that his performance would be a memorable one. He opened with the tune ‘Now You Now’, which championed RnB style vocals with funky, blues-inspired keys, bass, and drums. Despite being pre-recorded, Nii’s fire and passion for music shone brightly through the screen as the band progressed smoothly into ‘Picture Perfect’, sparking an indie-pop awakening into the festival.

Evelyn Valentine created the explosive visuals of anime-style cartoons, quirky animations, and the adorable giant yellow dog in the background. As an artist and filmmaker, she certainly knew how to create the perfect lively backdrop to balance Nii’s infectious head-bobbing tunes.

Hyperdawn certainly know how to invigorate the Art School Live party with their thunderous sounds of experimental electronica. With dark, ominous visuals by Joe Beedles accompanying their set, the array of purple, black and blue tones truly amplified their music. Opening with their album title track ‘Bleach’, Hyperdawn introduced a heart-pumping rowdy sound with their reel-to-reel tape loops and undertones of smooth synths.

As a duo, they operate on chaos and intensity, allowing their music to speak for them as they explore the limits of the pop genre. Using various equipment, like analogue tape machines, to create distorted sounds, their meticulously layered production is truly unrivalled. With Vitalija’s soaring vocals added to the mix, Hyperdawn truly captivated those watching in a hypnotic, broken-pop fuelled daze.

Caoilfhionn Rose’s set opened up with the song ‘Being Human’ – a brilliant arrangement of gently strummed guitars and bass, with mellow drum beats and Caoilfhionn’s angelic voice fluttering in and out with ease. Caoilfhionn’s set was as astounding as her impressive vocal range and soared and burst into diverse folk-textured influences. Her music made me want to close my eyes, plug in some headphones, and turn the volume up, to become fully immersed in Caoilfhionn’s silky vocals.

Visuals from Corina Bibere accompanied the set with various scenes like a street of people walking with umbrellas and cute animations of flowers. Splashes of watercolour overlays veiled the backdrops, which moved perfectly in sync with the guitars, providing illustrations almost as captivating as the music. Caoilfhionn’s stage presence may be more subdued, but the beautiful folk-inspired melodies and subtle indie influences in her music certainly enveloped the room.

The festival may have been coming to an end, but Secret Night Gang certainly did not slow down the merriments of the evening. Before playing a single note, the vibrant kaleidoscopic backdrop embodied how fun and energetic the trio’s performance was going to be. Starting with ‘Footprints’, devised of a lively combination of keys and drums the trio created jazz-style, harmonic vibrations as a base for the incoming swinging flow of saxophone.

After that instrumental jazz-funk jam, the band launched into the stunning anthem ‘Fall in Love’, where Kemani’s charming vocals became fully immersed in the song. Partnered with the sprinkling of richly expressive scat-singing towards the end the song evoked a soulful rhythm that I couldn’t help but sway to. Accompanied by visuals of Disney scenes underneath psychedelic loops of colour by Ren Matsunaga Sogunro and Raz Ullah, the stark contrast made their set an even more sensational event to conclude the festival.

The tremendous amount of effort from students, artists and festival organisers was crystal clear through the flawless production of the live stream. With many students never taking on roles of camera operation or event management, and this being the first live-streamed version of the festival, the professional outcome created was astounding.

Overall, all of the artists performing looked incredible and sounded so extraordinary that I almost didn’t notice that I was not in the room with them. The first Art School Live festival is a roaring success and a genuine treat to watch as live music is well and truly back.