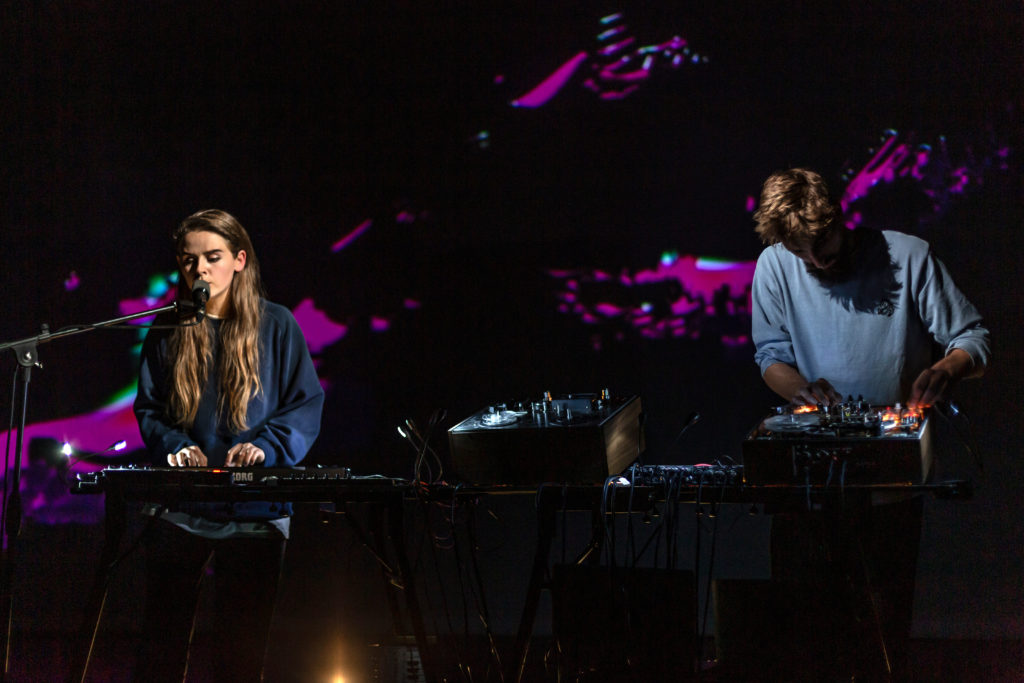 For decades the Manchester music scene has gone from strength to strength, producing some of the country’s greatest artist of all time, and it continues to do so today. This weekend Manchester’s School of Art shines a spotlight on some of the city’s new artists with the return of Art School Live and its ambitious new live-streamed festival.

The festival will showcase a diverse collection of live performances from talented upcoming Northern musicians and will feature a broad palette of genres from rock, hip hop, R&B to more niche and experimental electronica.

Here’s quick run-down of each artist and what to expect at Art School Live Festival 2021.

Caoilfhionn Rose, pronounced Keelin, is a singer and songwriter from Didsbury in Manchester. She embellishes her Irish and Yorkshire heritage through her style of folk music, combining it with ambient and slight psychedelia to the mix. Caoilfhionn has a talent for creating storytelling music with her gentle guitar pickings and siren-like harmonies. Her ethereal creation could make Fletcher Moss Park feel like Neverland. If you like New Wave Ethereal such as Kate Bush or, folk music from the likes of Fleet Foxes, Lucy Darcus, Adrienne Lineker, then you’ll love Caoilfhionn Rose.

The alt-rock band, from the industrial town of Preston is certainly one to watch if you’re into the nostalgia of shoegaze. Once a trio, consisting of Hannah (vocal and keys), Maria (vocals and guitar) Liam (bass guitar) are now a quartet after finding George the drummer they always wanted – one with no drums. They create a dreamy yet distinguished sound by combining drum machines, synths, beautiful vocals from the front women, and their gigantic guitar sounds one may dare to say mirrors the guitar legacy of Kevin Shields. If you’re a fan of Beach House or Slow Dive, then you have got to watch Dream English Kid’s performance.

Time to get those dancing shoes on because Natalie McCool will certainly get you moving and those toes tapping. Natalie is an emerging alt-pop artist from Liverpool and already has critically acclaimed recognition for her music from BBC Radio One. But it’s her live performances that truly stand her apart, with a tactful set list of songs alongside her an incredible rock’n’roll stage presence that certainly will raise the roof.  If you’ve been yearning for an Indie gig since lockdown then prepare as Natalie brings an electric performance that will transport you to the front row. Natalie has also just released her latest release album Take Me To Your Leader, which is ready to stream on Spotify now. Essential listening for fans of of indie rockers such as Haim and St Vincent.

The announcement we were all anticipating at Art School Live did not disappoint when Manchester new wave funk/soul group were confirmed to be topping off the line up. Prepare yourself for an explosive composition that fuses jazz, funk, soul and R&B that will uplift your mood beyond the stars. If Secret Night Gang can’t get your shoulders bopping and your body swaying, then we don’t know who can. Their sound is likened to the legends Earth, Wind and Fire and are likely to be enjoyed by fans of The Isley Brothers and perhaps Thundercat.

A Yank raised as a Manc, Iamkyami was born to be a star. We’re not the only ones that think it either, as her music has already been played by BBC Radio 1 and BBC 1xtra, as well as supporting artists such as Yazmin Lacey. Kyami’s talent certainly freshens up our all-Northern line up with colourful yet smooth R&B songs, flavoured with hip hop beats and catchy pop melodies. A style that is more common down South and, in the States, but Kyami certainly stands apart from the rest with her Northern influence. Listening to her will instantly catch vibes for fans of Noname, Ravyn Lenae and Mick Jenkins.

More pop and R&B but this time from Northern lad, Nii. We’d dare describe his music as mostly indie-bedroom pop formula, peppered with funky beats and jazz elements. Nii’s songwriting seems to pride himself on his emotional honesty on love, heartbreak and beauty that compliments his gorgeous R&B style vocals. He is also an absolute treat to watch live, as he releases a glorious energy as he performs. For fans of Miguel, Usher and Kevin Abstract.

The experimental pop/electronic duo from Moston are incomparable to anyone on our line-up, or across the board. Michael and Vitalija have a unique craftmanship at composing modified keys, strings, synths and percussion contrasting with Vitalija’s beautifully haunting vocals. Hyperdawn produces an ever-morphing concoction of digital sounds such as glitchy pitches and sprawling reel-to-reel tape loops, blended with mundane every-day sounds, like the sound of washing dishes and cutlery. If you’re unfamiliar with Noise Music and want to expand your taste from the analogue then Hyperdawn are great musicians to introduce you into more unorthodox styles of music. If you’re already fans of ambient and electronic music, or enjoy the likes of Aphex Twin, then you must watch Hyperdawn.

Comparing Alfie’s music to anything previously done before is almost an injustice to their creativity as something we could only describe as dreamy-cyborg-pop. However, despite their pioneering creation of sounds, there are nods towards influences from the likes of New Order or Depeche Mode and therefore may be a rather refreshing listen for those who enjoy the nostalgia of 80’s synth-pop. We’d also recommend Alfie Sky for fans of SOPHIE, Grimes and Gary Newman.

Finalising the round up is Elle Mary – another folk artist to compliment the line-up with a noir rock influence. Elle Mary’s music is best described as dark and melancholic with powerful, yet slow, rhythm heavy guitar and percussion sounds. She is another artist you must add on your priority list if you’ve been missing the experience of live rock music. If you enjoy music from the likes of Nick Cave and the Badseeds, PJ Harvey or fans of The Velvet Underground then watch Elle Mary’s live set this Friday.

This abundance of talent will be available to watch live for free this Friday 25th to Saturday 26th June, 6-9pm on the Art School Live’s YouTube channel. Don’t forget to click that notification bell so you know you won’t miss out!