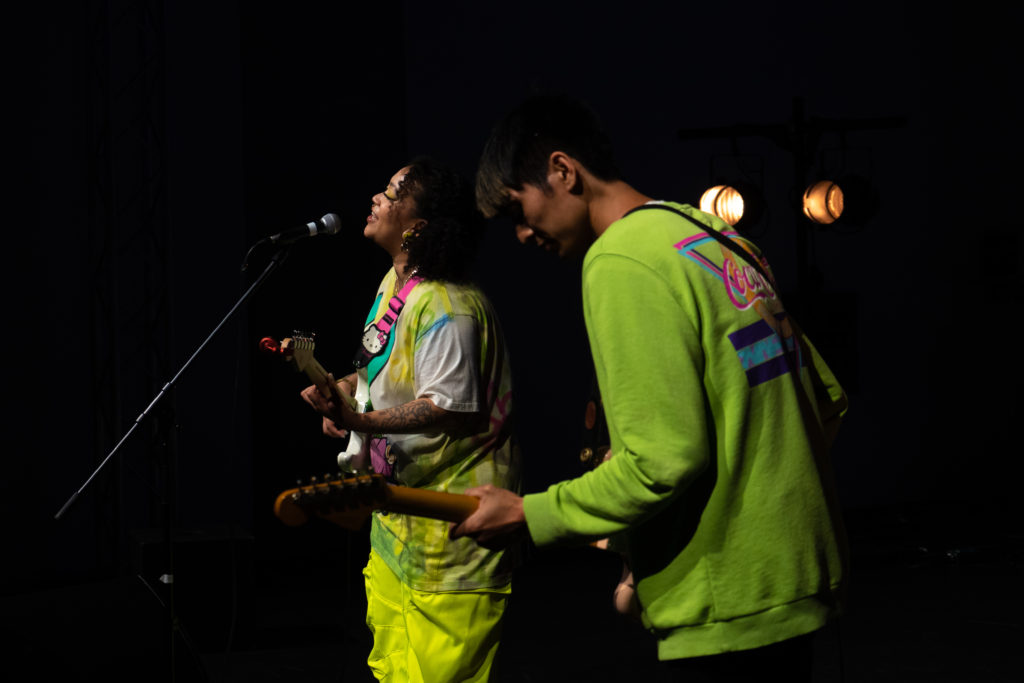 The two-day event kicked off at 6:00 pm and was hosted by BBC Manchester’s delightful Shell Zenner. As one of the most predominant voices championing new music, Zenner kindly took the time to host both days of the show. Zenner’s personality certainly added an element of sparkle to the show and the professional quality of this production, organized and put on by university students, went above and beyond.

Seeing Elle Mary and her band being projected on a giant screen in the new Grosvenor building felt like momentous. Hearing Elle Mary’s performance was almost ceremonial, as there was a moment of stillness before her harmonies and strings christened the concrete hallways.

Accompanying her set were black and white visuals created by photographer Lucy Armstrong and artist Pal, which complemented Elle Mary’s noir rock sound. This collaboration really came to life when ‘Ocean’ was played. The visuals and music came together enriching each other to create a moving ambiance of sweet serenity.

Alternative rock band, Dream English Kid, followed with a performance that was recorded back in May. Their performance has been anticipated for a long time for the Art School Live as the band were booked to perform back in March 2020 during the first lockdown. However, the wait was worth it and the band exceeded expectations as they delivered an enthralling and contemplative performance.

Dream English Kid gifted us with a carefully curated performance that they said differed from their usual live shows by transitioning into each song the way a DJ would perform one continuous mix. The layers of both electronic and acoustic sound the band created were truly remarkable. Visually, the performance was glorious, as the music was perfectly in time with the glitchy analogue art, created by their friend Viktorija Vrublevska.

After the performance, Maria (vocals and guitar) said: “It went really well. We had no idea how it would look, and we didn’t notice when we were performing. But it all timed really well with the video art, made by our friend Victoria while she was in Latvia.”

The third performance came from Liverpool’s Indie pop singer and song writer, Natalie McCool. She’s certainly cool by name and cool by nature, as she totally dominated the performance with ease, powerful guitar stances and effortless hair flips. One of her earlier singles ‘Heaven’ was one of the show’s overall highlights. It certainly set a feel-good tone for Friday evening.

McCool played a show-stopping selection of tunes, including an exclusive of her new single ‘Take Me to Your Leader’. Behind Natalie and her band, a display of incredible visuals by Robin Clewley featured images of Natalie’s silhouette on sunset beach. I implore you all to go to Art School Live’s YouTube channel and watch her performance. You’ll know exactly why she is an award-winning and BBC playlisted artist.

Headliner Iamkyami, a singer, songwriter and producer, is a true triple threat and it was an absolute treat to watch her perform. Kyami is originally from New York but has lived in the northwest of England since she was young. She blended the two parts of her identity in her performance to stunning effect.

Kyami pays homage to both sides of the pond, marrying RnB and pop acoustic in a modern bedroom pop formula. She also mirrors this in her look, styling 90’s baggy Hip Hop fashion in industrial work trousers, a graffiti graphic top, alongside nods to the Manchester rave scene like iconic smiley faces and neon colours.

It wasn’t just the technicolour of her outfit that lit the room, her music also conjured a feel-good atmosphere that replicated a summer feeling, despite being indoors. She began her set with her single ‘Slow Down’, a mellow and smooth song that set the tone for the female-led performance.

Iamkyami also gifted the audience with not one, but two unreleased tracks called ‘Stars’, and my personal favourite, ‘When I call’. After an inspiring advocation for the ‘she’s’ and ‘they’s’ trying to make it in the music industry, she wrapped up with ‘When I Call’ leaving us on a high of guitar rhythms and puppy love lyrics.

Live streaming events may feel rather dull for skeptics and live-music lovers, and perhaps they may wane out when post-Covid society begins. But it is important to take opportunities to digest music in different ways, particularly in such surreal circumstances. Also, performances like these offer some great opportunities to witness talented artists on the cusp of their breakthrough.

Don’t be dismayed if you missed Art School Live’s performances at the weekend as both Friday and Saturday’s shows are still available on YouTube and ArtSchoolLive.co.uk.

Watch the full Art School Live day one set below!