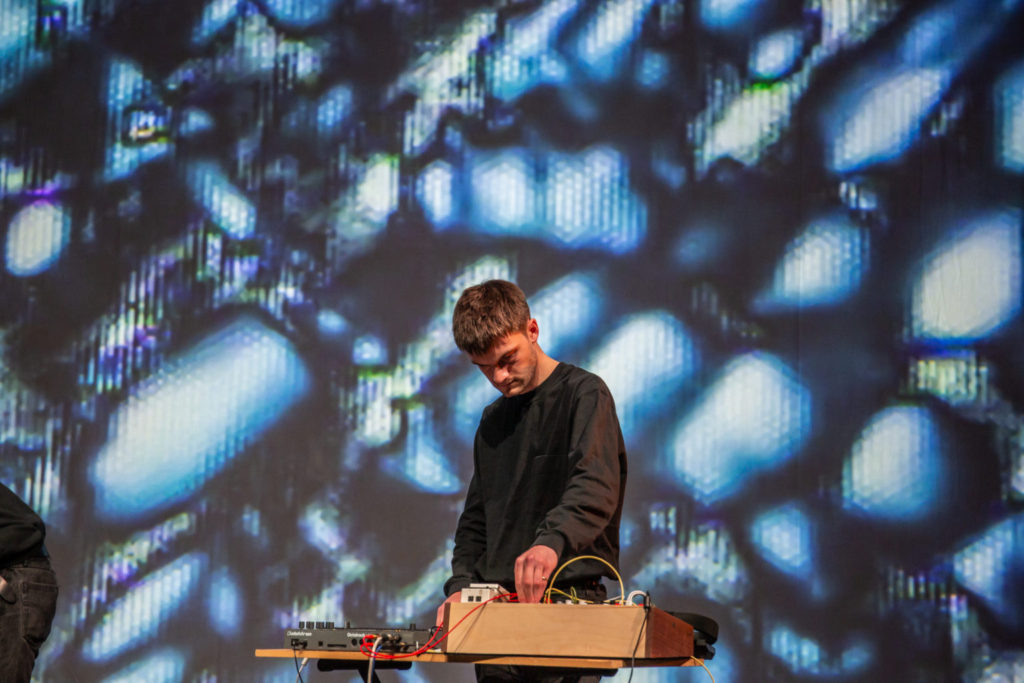 Dream English Kid formed in the small industrial town of Preston six years ago where original members, Hannah, Maria and Liam, met in college. The band got their start performing at open mic nights and jamming between classes. Now the trio are pioneering the emerging music and visual art scene in Manchester.

Manchester is notorious for producing some of the most innovative artists and bands from Joy Division and New Order to Oasis, but Dream English Kid are not interested in replicating this indie legacy. Instead, DEK has a refreshing take on alternative rock. They don’t adhere to the orthodox. They create music that is true to themselves.

DEK has a talent for blending a variety of genres and inspiration, with a particular nostalgic nod towards Shoegaze and Alt-Indie acts of the late 80s. And because of their ambition and innovation, they should be on everyone’s radar.

The hybrid nature of the DEK’s music extends beyond their music too, incorporating stunning visuals by their friend and visual artist, Viktorija Vrublevska, who worked with them on their Art School Live performance.

Vrublevska’s visual creations were the result of exploring video feedback with a DV camera and an Edirol V-4 mixer. With only a few tools at hand, Vrublevska produced beautiful distorted and psychedelic imagery to accompany the sombre but gigantic synth-based rock.

aAh! Magazine caught up with DEK after their Art School Live performance, which took place in June on YouTube. The band discussed how they curated their performances, their music taste, and the emergence of technology art and music in Manchester’s music scene.

How did you become a band?

Maria: “Well, us three [Maria, Hannah and Liam] have been in so many variations of this band. We’ve had like a billion drummers. It wasn’t that any of them weren’t good, because they were good musicians, they just weren’t fitting in with the sound we wanted to create. That’s when we discovered drum machines. Then along came George, who programmed the drums. That was just perfect for us.”

George: “I met you at a gig. Turns out we all had a lot in common, especially with music. So they’d send over tracks and I’d add stuff using my drum machine and synths.”

Maria: “Yeah it all happened rather organically how we came together.”

Maria: “That’s because you’re not in the band.”

How did the performance for Art School Live go?

Maria: “It couldn’t have gone better actually. We were told the visuals in the background timed really well with our music which is cool.”

Hannah: Our friend Viktorija made them for us while she was in lockdown in Latvia.”

What music inspires you?

Maria: “We like any music as long as it’s played well… Except maybe country music.”

Hannah: “Well a lot of our favourite artists inspired this particular set actually, such as Kraftwerk, Ulrika Spacek, Aphex Twin, Slow Dive, there are loads actually.”

Maria: “The vocals we used from one of the tape recordings came from our friend Katie, who is in a band called the White Flowers, and the first tape recording… Where did that come from?”

Hannah: “It’s from our song the ‘Shadow Song’ but it’s been put through an AR processor so that it has a more artificial sound.”

How was lockdown for you guys as a band?

Hannah: “We didn’t really do much in lockdown, but it was nice to just do nothing. There was a lot of pressure to throw yourself into new projects or reinvent yourself. But, as this is the only chance to be removed from responsibility, we thought, nice, no responsibility let’s chill and reset.”

Maria: “Yeah, we’ve got more energy now from taking time and letting ourselves reset. Before it was just work, work, work, uni, jobs and performing with other bands. The break has helped us recharge that creativity, and now we feel ready.

Liam: “Now that time has gone on, and more and more gigs have been cancelled, we’re now at the point where we’re geared up and ready to return to the graft.”

What are some dream venues you hope to play?

Maria: This is a really good question and I always say something really small like Soup Kitchen. But then again Manchester is full of great venues.

Liam: Gorilla is a great venue and there’s White Hotel. I’d like to play at 2:00 in the morning at White Hotel.

George: I’ve always wanted to play Deaf Institute, but you guys have?

Hannah: Yeah to like two people! But actually, it was a really good gig.

Liam: Any outdoor venue then. Like Pompeii or an amphitheatre, Castlefield Bowl would be cool.”

What are your thoughts on Manchester’s current music scene?

Maria: “It sometimes feels like there is only one type of music appreciated from Manchester.”

Hannah: “It’s more about the visual art scene emerging. Like there are sound-orientated events with a focus on visual aspects too. Manchester is so good for that holistic combination of art technology and music. That is what I think people are probably migrating to Manchester for. White Hotel is a great place to discover it too.”