You are here: Home / Culture / Entertainment / Interview / Manchester / Music / News / “I looked back on things that I didn’t grab by the collar, took that experience, and then really delved into it”: Nii on Art School Live, new single, and supporting Lionel Richie in concert 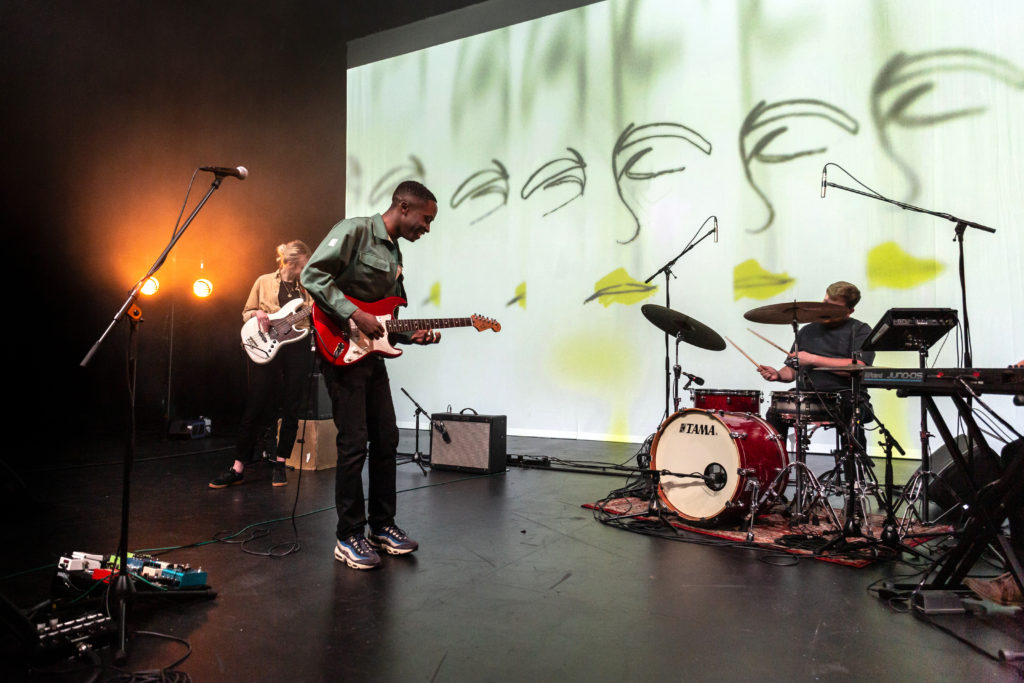 Born in London, but blossoming in Leeds, Nii, the Art School Live veteran has returned with his charismatic stage presence and vividly upbeat songs. Joined by Pete on the keyboard, Tom on the drums and Amanda on the bass guitar, the West Yorkshire-based musicians are masters at creating their own silky-smooth RnB energised and indie-pop fusion.

Earlier this year, Nii released his latest single, ‘Picture Perfect’; this feel-good anthem is certainly anticipated to be a crowd-pleaser. The song features raw and honest lyrics tied up neatly in a bow of jazzy bass, gentle riffs, rich harmonic keys, and punchy undertones of drums, create a perfectly danceable tune.

Nii’s music calls for dancing that involves throwing all your worries away and fully immersing yourself in the beauty of this exceptional music. The type reserved for the front row of a concert to display appreciation for the great tunes played.

aAh! Magazine caught up with Nii and the band ahead of the streaming of their performance at the first Art School Live Festival, which took place in June on YouTube. We discussed Nii’s latest single, the beef stew fiasco whilst supporting Lionel Ritchie, and why the northern music scene is more diverse than London’s.

How did you all meet each other?

Nii: “Yeah, Tom, Pete, and I know each other from university. I got to know Amanda through a friend of mine when I needed a bassist. I felt like she had the vibe. The purpose of us all meeting was through my music.”

How did you find the performance?

Tom: “We loved it! It was really nerve-racking after not doing it for so long.”

Amanda: “Yeah, it was really fun. It was a bigger production than I expected, but it was sick though!”

Nii: “I felt like my eyes were following that arm [the camera jib] going up and down – that’s all I was focusing on. But it was great; I was saying before it just felt weird to be singing in front of people for the first time in probably a year.”

Do you think streamed events like this will be more popular after the lockdown? Do you think they have a permanent place in the music industry?

Nii: “I think it’s definitely going to be more of a viable option for people. Now that we’ve gotten to terms with how it works and how to do it logistically, it’s more of an option.

Tom: “Everyone has had to climatize to it, but it’s so much more viable now. We have done little things throughout the year, but it’s all been live streams. It’s been a chance for musicians to keep going.

“If your performance gets streamed on YouTube on a Saturday night, you can tell your friends and family. Plus, you’re still managing to do what you love as well.”

What made you want to get involved with Art School Live?

Nii: “I was speaking to Evan about when I performed with Mali Hayes, which was a good time, and we stayed in touch. I’d watched some other Art School Live performances, the one with Bunny Hoova, and there were some projections that I thought were cool.

“When Evan got in touch, I mentioned it would be cool to have some projections. But that was already the premise of this event, so that got me really excited to do it. So, I told him that I was 100% down for it.”

How was it working with Evelyn Valentine your visual artist?

Nii: “Yeah, it was great! When I was introduced to Evelyn, I saw her past work; and I thought it was cool. It was vintage, and it had some anime-style with a sort of a ‘Ghost in the Shell’ aesthetic. That is something I’d typically go for. Once I looked at the final sequence, it was all of that in a loop which was really great.”

How did you find lockdown; what effect did it have on your music?

Tom: “It was up and down – sometimes it was good, and I felt motivated to do things, and other times I didn’t want to do anything. I think everyone has had a bit of an odd year, to be honest.”

Pete: “Obviously, gigs just dropped off the face of the earth. With all of us being gigging musicians, the calendars were pretty full. Then at the drop of a hat, they just emptied. It was like, ‘Oh my god, how do I survive? I have no income.’”

Nii: “As Pete said, having a space to work from and use creatively has been great, finding some unique avenues to stay busy with and stay sane, and to eat food! I think staying sane comes before eating food for me; there’s been ups and downs.”

Tom: “I think it’s because the lockdown has been up and down; the industry has had this yo-yo effect. We’ve been thrown a leash every so often, and then it’s been yanked back. It’s been like that all year. That effect is not good for people as you get excited, but then nothing happens.”

Would you ever consider moving back down to London?

Nii: “I would, but it depends on what is waiting there. I’d need to be there. But I don’t think going down there is the be-all or end-all. Anything that I have that’s worthy, that people would want down there, it’s because I’ve been up here trying to be that thing. I wouldn’t have been able to find myself musically in London.”

You’ve just released a new song, ‘Picture Perfect’, that came out in March; what was the inspiration behind that?

Nii: “I wrote that at the beginning of lockdown around April or March. It was spring, and it felt like that whole new beginning type of thing, but everything was still quite static. It felt like looking back on things – there were a lot of opportunities to find new experiences. I looked back on things that I didn’t grab by the collar and take that experience and then really delve into it. ‘Picture Perfect’ is a song about making the most of a situation and realising that it’s not always going to work out the way you think it’s going to work out. And that uncertainty is something that’s always welcome.”

What is the plan for you in the future – any upcoming gigs or events, new music?

Nii: “Not really any gigs lined up but new music! Earlier, we played a song called ‘Better Days’ and I’m working on a music video [for that] with a videographer. That should be cool. I’ll be filming that in a couple of weeks and there will be green screen things involved.”

Nii: “That’s right, I said it! But yeah, just mainly releasing music. The plan for the next year is to work on a more solid musical and visual identity that I can put out there. I feel like we’re finding that thing now. The plans are just releasing music, and that’s it really.”

Tom: “Just to prepare for the rest of this year. Things are starting to flood back in the diary again. There are a few festivals with other artists; there’s a gig in London which will be fun at The Jazz Café, there’s Kendal Calling. There are some pretty cool things coming up, but we’ve got to prepare for them.”

Pete: “I’m the same as Tom. The calendar is looking busy, which is nice as it’s been bare for the past year and a half. Mainly just rehearsing with different bands for different events, festivals, and functions. There’s a couple of tours, one of the bands that I play for has just sold out Gorilla in September, so that will be great. So, prepping for the tour and just enjoying being back playing again.”

Amanda: “I’ll be finishing university as I’m going into my third year, but there are a few other project goings. I’m studying jazz with production [at university], but I’m also interested in many genres of music. I love pop as well! I plan to have fun in general, so I’m excited.”

Check out Nii’s full performance at day two of Art School Live below!

Nii’s newest single ‘Picture Perfect’ is out now on Spotify, Apple Music, and all major streaming platforms! Be sure to follow Nii, Pete, Tom, and Amanda on social media to stay in the loop of their upcoming projects