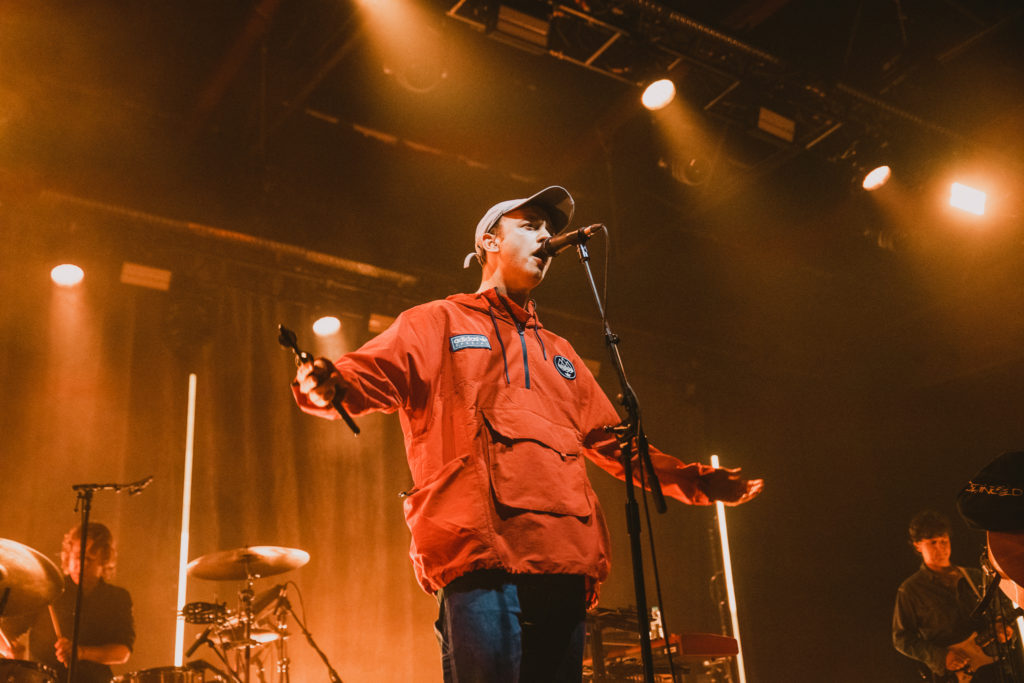 DMA’S embarked on their biggest UK tour to date, performing back  on British shores for the first time since the release of their third studio album The Glow, with three huge shows at Manchester’s very own O2 Victoria Warehouse.

Holding the prestigious place with the most dates on the UK tour, it seems DMA’S have adopted a special relationship with the city; perhaps due to some of the band’s main influences being iconic Mancunian Britpop artists. It was almost like a homecoming from the three lads hailing from Sydney.

The crowd was buzzing with excitement as they awaited the arrival of Tommy O’Dell (lead vocals), Matt Mason (lead guitar and backing vocals) and Johnny Took (acoustic guitar). As soon as the clock struck 21:15, DMA’S set foot on the warehouse stage once again, three years after their headline show there back in 2018 to celebrate the release of sophomore album, For Now.

Kicking off straight away with The Glow’s opening track ‘Never Before’, the crowd erupted into chaos instantly absorbing the Stone Roses vibes. With little desire for small talk, the band followed with album’s title track and fan-favourite ‘Dawning’.

‘Life Is a Game of Changing’ brought soaring synth melodies and repetitive vocal hooks giving off anthemic vibes with a Haçienda twist. ‘Emily Whyte’ saw fans clambering onto each other’s shoulders to take in the gig from a different view. The audience sang loudly back to the band as if it was their very own performance.

It wasn’t until the eleventh track on the setlist, Tommy sparked a little conversation: “Good evening, how [are] we doing? It’s good to be back, Manchester,” which is greeted with a cheer. The band quickly got back to the music, leading into ‘In The Air’ which ignited a mass singalong in which the crowd carried the rest of the song, chanting the ending lyrics. A moment to remember.

Heavy with songs from the new album but with an 18-track setlist, DMA’S had plenty of room to include some of their most adored tracks. After briefly exiting the stage, they completed their encore with ‘Appointment’, ‘Lay Down’ and energetic hit track, ‘Feels Like 37’.

The night was an epic return to Manchester’s Victoria Warehouse with DMA’S bringing back their unique take on the city’s very own Britpop sound. There is something truly special about watching the band’s anthemic performance live and seeing the unrivalled level of energy.

Check out our latest interview with Johnny Took here.