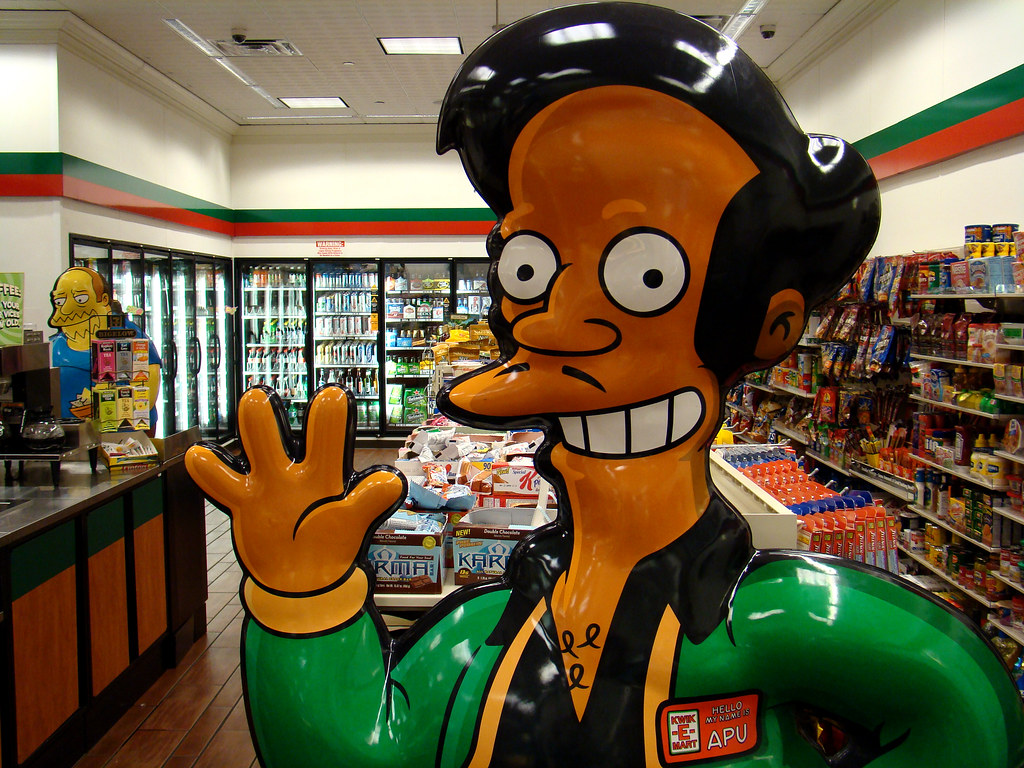 The Simpsons character Apu has recently been the centre of controversy, derided for being an outdated and racist stereotype of Indian people.

Springfield’s beloved Kwik-E-Mart has been forced to close for good and its owner Apu Nahasapeemapetilon faces deportation into obscurity after voice actor Hank Azaria recently resigned from the role. Surprisingly, it isn’t the Trump administration threatening to remove immigrant Apu, but those who share his Indian heritage instead.

Indian-American comedian Hari Kondabolu’s TruTV documentary ‘The Problem with Apu’ helped raise the issue of Apu to the mainstream. In the documentary, Kondabolu describes the bullying South Asians face because of Apu’s accent and how up until the recent rise of South Asians in mainstream media with celebrities such as Mindy Kaling, Aziz Ansari, and Kunal Nayyar, their only representation was Apu. Kondabolu and the South Asian people he interviews claim that the accent is a damagingly untrue stereotype and that they found it offensive.

However, while I agree that South Asians don’t actually speak in the way Apu does, I don’t think the voice is offensive for the simple reason – The Simpsons is a cartoon. It is expected that the voices of the characters will be unrealistic. It wouldn’t make sense for Apu to have a New York accent like Kondabolu. The fictional character was born in India and grew up there which suggests English is his second language, and although he speaks perfect English it isn’t surprising he has an accent. Yes, it is exaggerated, but it’s a cartoon – it’s warranted.

‘The Problem with Apu’ also heavily critiques Apu’s voice actor Hank Azaria simply because he is white. Although it would be ideal for an Indian to play an Indian character, I don’t believe it is necessary when performed without malice. Nancy Cartwright isn’t a ten-year-old boy, but there isn’t outrange for her voicing Bart Simpson. She also isn’t Indian, yet voices Apu’s octuplets without backlash.

Indian-American actor Kal Penn is also interviewed in the documentary and states that his character in the movie ‘Harold and Kumar Go to White Castle,’ is a better depiction of Indians than Apu. In the film, Penn’s character Kumar is a lazy Indian-American who only wants to smoke weed and eat burgers, whereas, although Apu Nahasapeemapetilon is a business owner, husband, father, firefighter, legal immigrant, computer science PhD graduate (who has paid off all his student debt) and is extremely hard-working, beloved by all of Springfield (especially the women), he is a viewed as a bad depiction of Indian people due to his accent.

Growing up with Pakistani heritage, I was constantly referred to as Apu and heard ‘thank you come again’ daily, but I would take it as a compliment given how amazing Apu is. I would be rather be referred to as Apu than lazy-Kumar Patel (Harold & Kumar Go to White Castle), shy-Raj Koothrappali (The Big Bang Theory) or angry-Mr. Khan (Citizen Khan).

Removing Apu from the series entirely is a slippery slope to what could be a problematic change in The Simpsons and mainstream entertainment in general. The Simpsons has lots of cartoon-accents that could also cause offence such as Luigi Risotto, Cletus Spuckler, and Groundskeeper Willie to name a few.

Looking at the bigger picture, beloved characters like Mario would have to be changed or removed. It could mean the loss of jobs for many voice actors, as they could only play characters of a similar background to their own. How far would this strict rule go, would actors no longer be able to do accents other than their own? Would Idris Elba not be able to play an American as he did in The Wire?

Hollywood needs accents, it would crumble without them!

We need to look past these trivialities and realise Apu is a complex character with lots of admirable qualities, as well as a role model to Indians and non-Indians alike. When Apu sings ‘Who needs the Kwik-E-Mart?’ we shouldn’t ridicule his accent, we should see him as the complex individual he is and sing back, “we do.”