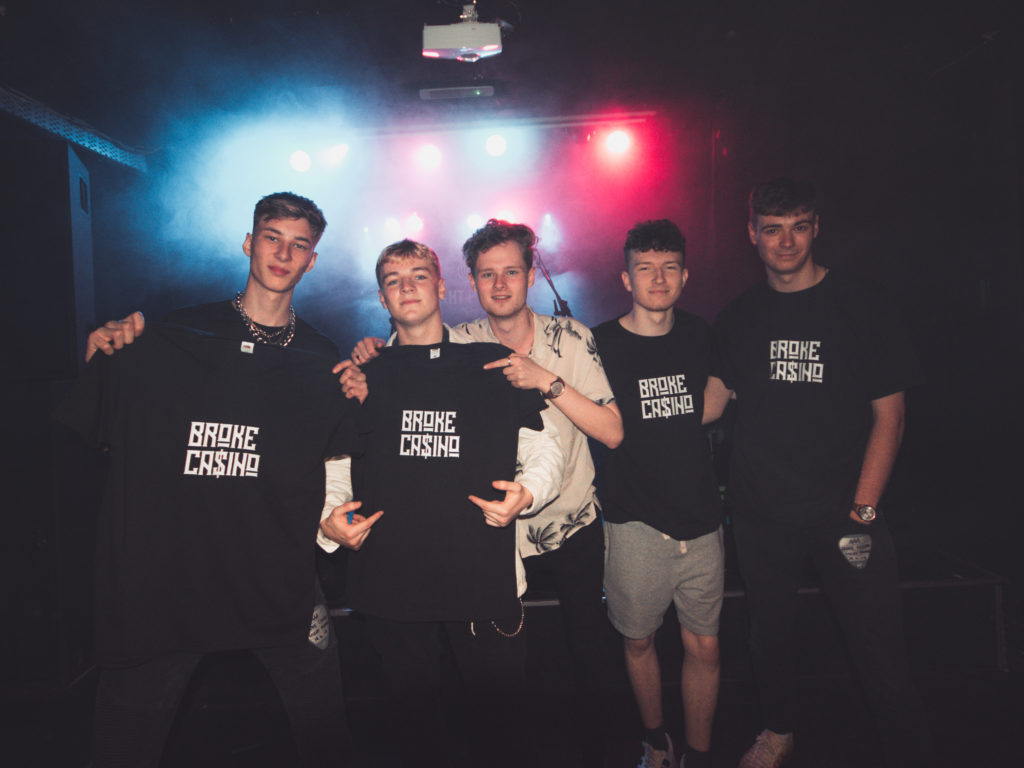 Night People is notoriously known for its dimly lit and intimate atmosphere. With only a small barrier separating the audience from the stage, it is easy for artists to instantly build a connection with the audience.

Last Friday’s headliner, Ryan Jarvis, may be making waves in the new music scene, but support Broke Casino certainly made a splash during their set, too, as they quickly begin to dip their toes in deeper.

Due to an unfortunate ticket misunderstanding, some fans were unable to gain admission, as they had unfortunately bought tickets without realising it was an 18+ venue, as this was unclear on advertising materials. Despite this leaving Broke Casino’s fan attendance sparser than usual, the remaining members made sure their presence was felt, cheering and clapping with their hands in the air as Broke Casino took to the stage.

Their first track of the night was heavy-hitter ‘Boss’, the heaviest song of the set, oozing pure punk vibes. The bass echoed through the crowd’s bones – as the title suggests, this is a track which demands to be listened to.  It has to be noted that stage presence, which is normally a virtue earned over time, has quickly become a Broke Casino staple. The small stage was well-used, and lead vocalist Ralph McCarthy-Schofield played the role of the enigmatic frontman well, rewarded for his efforts by members of the crowd punching the air in appreciation.

The applause from the fans encouraged McCarthy-Schofield to implore them to “bring it forward”, as the band launched into ‘Dark Horse’.  The indie-rock influences could easily be noted from the melodic intro, backed up by Match Sienkiewicz on the drums. As McCarthy-Schofield ended on a crooning note, the die-hard fans at the front cheered, showing it really is more about quality than quantity when it comes to growing a fan base.

‘Chemical Imbalance’, written by Broke Casino’s lead guitarist and backing vocalist, Ollie Boon, was one of the slowest songs of the set, but certainly no less effective than the rest. McCarthy-Schofield rested his foot on the front speaker as the intensity of the song swelled, the lead and backing vocals blending seamlessly while he and Boon avoided the tendency that some artists have to shout, keeping it soft, in line with the theme of the song. This particular track did hark summer vibes, visually enhanced by the predominantly Hawaiian shirts worn by the band, reminding us that festival season is only around the corner.

After their impressive take on a Kings of Leon classic at their last gig, it was no surprise their next cover would be equally ambitious. Tackling ‘Call Me’ by Blondie is not for the faint-hearted, but Broke Casino did it with seamless style. Starting with McCarthy-Schofield cueing a drum solo from Sienkiewicz, and himself belting out the famous lyrics, this had the whole crowd singing along. He encouraged the audience to “get ’em up” and clap above their heads, as well as managing to create a call-and-response with the chorus, he and the fans singing “call me” back and forth to one other.

The penultimate track of the set, ‘Bleach’, is a fan favourite due to it being their first released track.  From the opening lyrics, “I know you came here looking for something,” the crowd knew what was coming, and they jumped delightedly in time with the infectious riffs as McCarthy-Schofield put his all into his interaction with them. Sean Savage kept it tight on the bass, allowing guitarists Sam Wilks and Boon to add their heavy stamp to the chorus.

Finally, ‘Truth’ bridged the gap between Broke Casino’s earliest work and their latest. It could, in fact, be described as the mature older brother of ‘Bleach’, as it perfectly demonstrates their progression as a band while remaining equally catchy.  They carried through the track perfectly, beginning with Savage on the bass and ending on a high-powered protracted note from McCarthy-Schofield. The cymbals could be felt without being too harsh, and the crowd responded well, bobbing their heads away, clapping their hands to the thumping drums. All of the band were using the limited space on stage to their advantage, putting their all in for the final song.

A lasting image to sum up the show, the members faced the back of the stage to build up the intensity as McCarthy-Schofield tauntingly said “only joking,” and they launched into their instrumental cover of ‘Rango’, a Catfish and The Bottlemen classic, for their encore. The set finished on a high, picking up for the final notes with even McCarthy-Schofield mimicking playing the guitar to join in with the fiery sounds created. It felt like a final effort to prove that if there was an award for the most improved band, Broke Casino would surely receive it, having gone from strength to strength since their headline gig at Hive last month.

Make sure to catch Broke Casino on tour next at Mancunian, cult-Classic bar, Jimmy’s on the 25th of April for their charity show for Manchester Mind with The Monsoons. They’ll also be appearing at their first slot in Liverpool supporting indie-pop band Stanleys at The Jacaranda Club on the 30th of April. While you’re there, don’t forget to pick up a t-shirt, as it’ll surely soon be used as a badge of honour to boast that you’ve long had your eye on the latest movers and shakers in the music industry.

Be sure to keep up with Broke Casino: