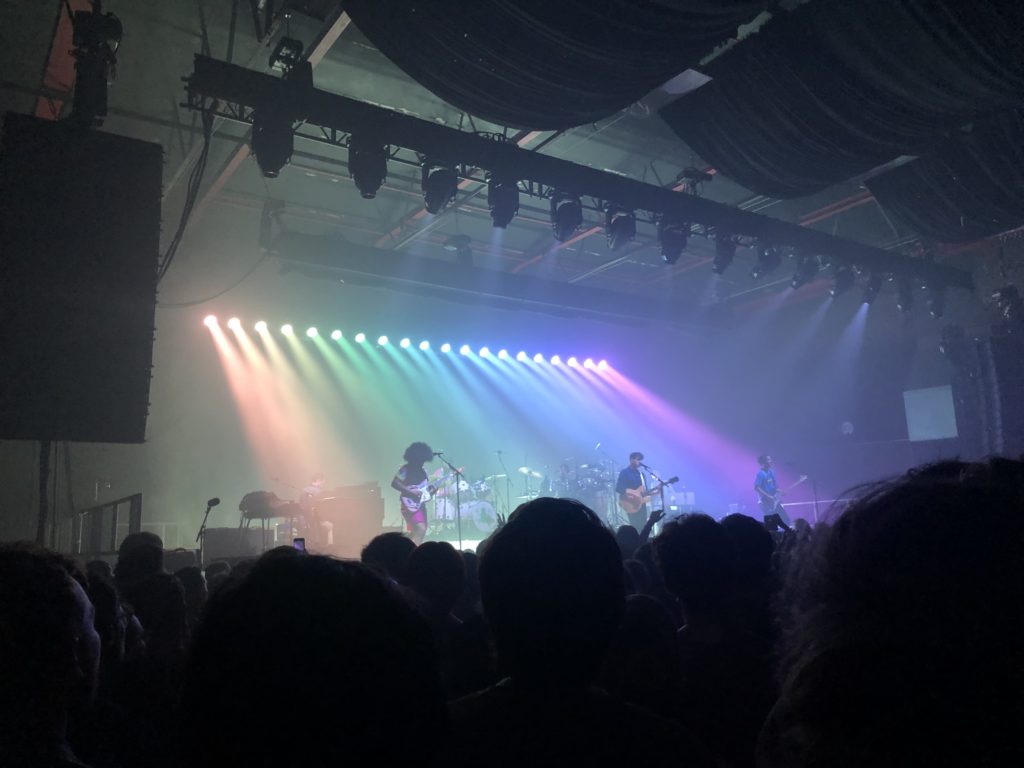 Vampire Weekend was back in Manchester for the first time in six years to perform at the bustling Victoria Warehouse, on the second night of their UK tour for their newest album, Father of the Bride.

The crowd was a mixed bag, from big groups of teenagers to middle-aged couples with their kids, but it was clear everyone in the room was looking to forget about a cold and gloomy November evening and allow their spirits to be lifted by the band.

Desert blues group Songhoy Blues were scheduled to be the opening act for the show, but weren’t present due to “circumstances beyond [Vampire Weekend’s] control”. The lack of a support band meant that Vampire -Weekend had one-hundred-per-cent of the spotlight on them and they took advantage of it, playing for around two hours. A 25-song setlist meant that the New York-born band were able to play a wide range of material, both new and old, from all four of their studio albums, even throwing in a couple of SBTRKT and Crowded House covers.

The band opened the set with ‘Bambina’ from their most recent album and tour namesake, quickly following into well-known fan favourite ‘Unbelievers’, a number which felt as if it would have been more appropriate as the opening number because it was the first song to get the crowd bouncing, leaving a clear buzz amongst them when it finished.

Frontman Ezra Koenig first addressed the crowd a couple of songs in, saying, “it feels good to be back [in Manchester]. It’s been too long”. Koenig managed to keep up crowd morale throughout, asking for singalong participation in ‘One (Blake’s Got a New Face)’ as he sang “Blake’s got a new face” and the crowd were more than happy to mirror the line.

Despite Koenig’s impressive stage presence as frontman, it was clear from the very beginning that bassist Chris Baio was going to steal the show as he ran on stage in a bright tie-dye t-shirt and garish pink shorts. However, it wasn’t his clothing that made him stand out; Baio’s clear passion, energy and strong connection with the rest of the band, particularly Ezra, was almost mesmerising to watch. This enthusiasm was particularly visible during his many bass solos throughout the night. It was clear to see that he was enjoying himself, which seemed to rub off on the audience, keeping their energy up regardless of the long setlist.

The biggest crowd-pleasers of the night came from classic tracks off of the first two albums Vampire Weekend and Contra, particularly the iconic, arguably one of the biggest songs of 00’s indie-pop, ‘A-Punk’. Songs such as ‘Cousins’, ‘Oxford Comma’ and ‘Cape Cod Kwassa Kwassa’ also provided a warm sense of nostalgia and familiarity for a good proportion of the crowd, who were most excited to see their old favourites played live. Nonetheless, the songs from the most recent album still went down a treat, particularly singles ‘This Life’ and ‘Harmony Hall’. Clearly, Vampire Weekend is a band with longevity that is still well-loved today, 13 years after they first formed.

Vampire Weekend finished the evening with their encore, which consisted of songs from all eras, including three audience requests and another classic from their debut, Walcott. The band also released two giant inflatable globes from the ceiling, a homage to the album cover Father of the Bride which features a picture of the world.

Overall, the seven-piece line up put on an excellent show which managed to showcase the true depth of their sound and abilities from the classic preppy, fun indie-pop feel of the first three albums to the more American pop-rock sound with the newest addition to their discography. Vampire Weekend’s gig confirmed that they’ll always be loved by their fans.