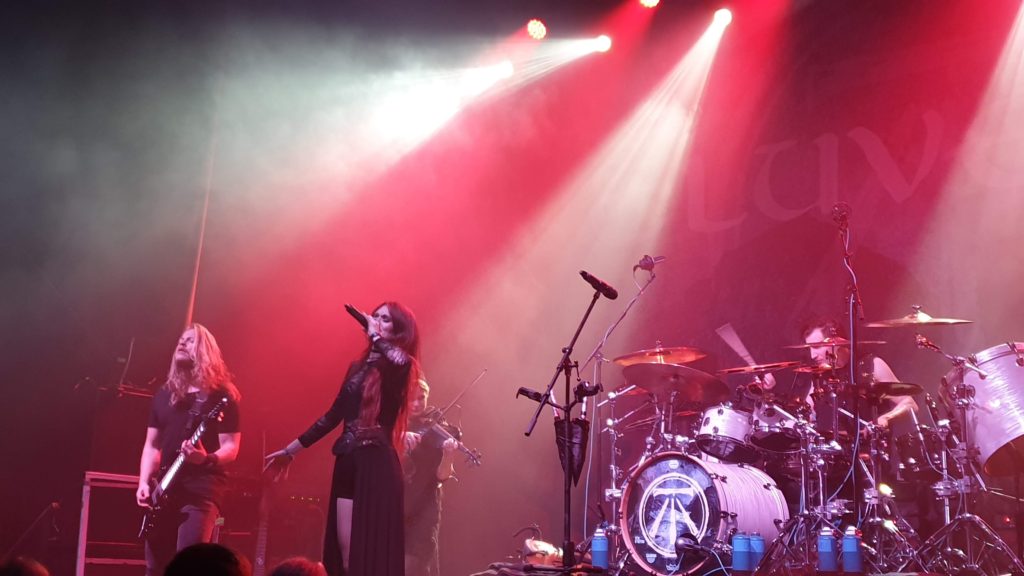 Words and photography by Pruthvi Khilosia

The lights cut out, the speakers rumbled, and a black void opened up in the hall, before the first band of the night, Infected Rain, trapped the audience in terror and awe for their first-ever show in Manchester. Lead vocalist Elena Kataraga, aka ‘Lena Scissorhands’, was proud to announce that the band was losing their “virginity” in the city and was glad to see such “beautiful people” in the audience. The Moldovan band made a short but striking performance of their new album Endorphin along with songs ‘Mold,’ ‘Orphan Soul,’ and ‘Sweet, Sweet Lies’, which pumped the crowd with rage and ecstasy.

Lena’s vocals pierced the room, backed by heavy, orchestral metal. The diverse turnout at the O2 Ritz, regardless of the gothic theme, took Lena by surprise – she said it was one of the highlights of the night for her. Initially, there was a lack of crowd interaction with the band, but the singer screamed continuously that she wouldn’t carry on unless she saw movement, which took the audience aback. It was all resolved with a final encore featuring Infected Rain’s acidic presence and energy, which manifested with a celebratory mosh pit.

The gothic realms of music really began to take effect on the crowd after Eluveitie made their appearance. The Swiss folk-metal band was the special guest of the night and didn’t fail to show it with their unique form of alt-metal. They brought the heart of their homeland onstage through a collection of unorthodox instruments, including harps, flutes, violins and even a hurdy-gurdy, which created a traditional Celtic atmosphere merged with hardcore rock and metal. The crowd even chose for the band to sing in their own language.

The hard vocals of Chrigel Glanzmann and enchanting outros from Fabienne Erni evoked mysticism of the misty Swiss pines and mountains in the darkness of their music, which really made them stand out from the genre. Their performance included songs ‘Luxtos,’ ‘Thousandfold,’ and ‘The Call of the Mountains’, and they received continuous calls for encores from the audience after the lights went out.

The massive queue outside the Ritz was justified as the floor shook once again for Lacuna Coil. Blood flooded the stage as their backdrop rose victoriously, and the band marched up, dressed in their iconic attire and makeup. Lacuna Coil was here for one reason – to start a powerful movement in Manchester. The distance between stage and audience quickly disappeared after the singer expressed solidarity with the city’s various struggles over the past year.

Of course, the band’s dramatic looks, flare and destructive attitude were photographed, but lead vocalist Cristina Scabbia appreciated how Manchester “lived in the moment.” The performance of their new album Black Anima including songs ‘Ultima Ratio,’ ‘Spellbound’ and ‘Die & Rise’ all followed Lacuna Coil’s mantra of the night – to not care about what others think and be who you are.

The crowd was most lively when Lacuna Coil performed ‘Nothing Stands in Our Way.’ Scabbia said, “be yourself, be fearless and don’t let people tell you who you are,” which evoked a huge cheer as the drums beat towards the end of the song. Vocalist Andrea Ferro’s growls and screeches really brought out the individuality of the crowd, Manchester and the band on the night.

Lacuna Coil’s cover of ‘Enjoy the Silence’ by Depeche Mode brought everyone back together from their own trances and proved to be a huge success, in keeping with the flair of the original song. Calls for an encore rocked the hall once more and brought the band back out to perform ‘Delirium,’ ‘Zombies’ and ‘The House of Shame’, as people grabbed ahold of hell-sent guitar picks and drum sticks flying offstage.

All three bands on the night managed to tease out Manchester’s secret gothic identity once again, and prove that the genre isn’t just all about darkness.