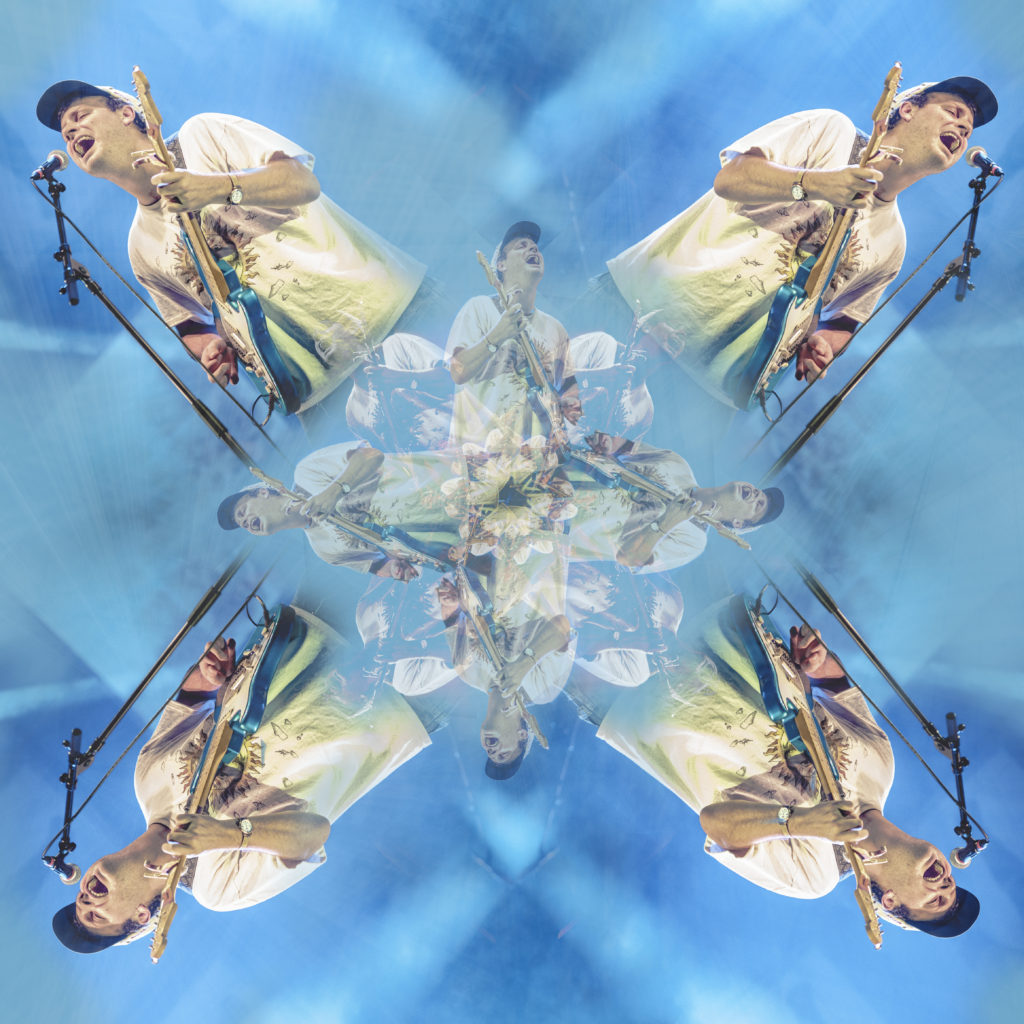 Mac DeMarco is an artist who performs like he’s inside his own living room. With the lights down low, the Canadian king of chill and his bandmates wreaked absolute havoc on socially acceptable gigging norms under the cavernous oval stage of the O2 Apollo, with an onslaught of unexpected stage antics and impromptu outbursts backed by a surprisingly mellow setlist. However, DeMarco seemed entirely at home. He has a real knack for bringing you right back to earth, reminding you that life, perhaps, shouldn’t always be taken so seriously.

DeMarco brought along support band Working Men’s Club, a three-piece from Yorkshire, to warm up the stage. The band needs no drummer, relying on hard electronic beats accompanied by jarring indie vocals instead. Backed by driving synth and guitar tones flowered with phasers, experimental techno drum loops and frenzied, flashing strobes, frontman Sydney Minsky-Sargeant swaggered across the stage with a tambourine, before whipping his shirt off for the last few songs.

Their set was punchy, especially ‘Bad Blood’ – a cyclic electronica track that angrily grinds along with a distinct indie edge. In your face, noisy and energetic, although a little incomprehensible, Working Men’s Club set a lively scene for Mac, who was determined not to follow suit.

Easily one of the most entertaining live artists on the scene right now, Mac DeMarco he has no need for unnecessary showmanship. Instead, he semi-ironically peddled his act as a “rock show”, cracked jokes and chatted to his bandmates like they were in the middle of a rehearsal. But he genuinely shows an interest in his location and his audience – a trait unforgivably lacking in most touring musicians.

For his tour this year, DeMarco is playing far bigger venues – a factor which might have proved daunting for him. And at first, it was easy to be fooled into thinking the man was a little perturbed by the size of the audience on the night. But the myth was quickly dispelled.

DeMarco proved to be a master crowd manipulator, coaxing the audience into crouching on the floor, clapping along to obscure beats or just listening in awe as the band screamed down their microphones for a solid 5 minutes – coined as “Andy’s guitar solo” – during the interlude of ‘Still Together’. DeMarco even told NME that if he has a “giant stage or “giant crowd”, he feels like playing “really slow and really quiet”, a mantra which he has remained faithful to for this tour.

Although the set was a little slow – especially for those pining to start a mosh pit – it was beautifully put together. Kicking off with ‘On the Level’ from album This Old Dog (2017) and fan-favourite ‘Salad Days’, the set lulls halfway in to what DeMarco called “a mellow moment”, with ‘My Old Man’, a relaxed rendition of ‘Ode to Viceroy’ and the melodically entrancing track ‘I Like Her’.

Guitarist Andrew Charles White (Andy), famous for his spot-on falsetto skills, sung the piano melody to ‘Another One’, whilst the tear-jerking chord progressions of ‘Still Beating’ brought the whole venue to a standstill. Warm acoustic jazz chords and gentle piano licks embezzled Mac’s classic relaxed back catalogue throughout, as a soft hazy light presided over the stage.

However, the gig was one of extreme contrasts. Mac would often scream down the mic, or crab-walk across the stage to the backing of what most would consider as very gentle songs. ‘Choo Choo’, a chilled blues number from the new album which only features the line “Choo choo, take a ride with me”, inspired crowd-surfing from the audience.

Mac would often scream down the mic, or crab-walk across the stage to the backing of what most would consider as very gentle songs.

Halfway in, DeMarco finally screamed, “open up the mosh pit” and dived into the better-known half of the gig with ‘Freaking Out the Neighbourhood’ – a song Mac wrote for his mother; apologising for sticking a drumstick up his bottom on tour in 2012. His high notes on the pre-encore finale ‘Still Together’ were, as always, phenomenal. Although he comes across as ‘laidback’ (a word DeMarco apparently hates) his musical prowess is really a hidden gem.

Little personal touches, however, were what really made the night. The screens onstage, which seemed to have a life of their own, streamed videos of ripped British wrestlers, Arnold Schwarzenegger, and close-ups of Andy’s bare feet, often flicking back and forth over the band members in a surreal montage filmed by a special camera onstage.

His high notes on the pre-encore finale ‘Still Together’ were, as always, phenomenal.

In fact, it was hard to predict what DeMarco would come up with next. A strategically placed rose onstage led to a cover of ‘Kiss Like a Rose’, except nor the band or the audience really knew the lyrics. Mac pulled a member of Los Bitchos (the pre-support band) on stage, adorned with a crown, for a crowd rendition of ‘Happy Birthday’, and even for the smallest blunders that would throw many artists off, Mac rolled with the punches as smoothly as ever. Accidentally ripping cables out of his guitar or fixing straps which constantly fell off, it’s as if the whole thing were just meant to be.

Even for the smallest blunders that would throw many artists off, Mac rolls with the punches as smoothly as ever.

DeMarco, following an encore, announced his final track as ‘Blue Boy’ – one of his most popular songs – before diving into a hardcore Metallica cover of ‘Enter Sandman’ instead. Well, the riff anyway. In hindsight, it’s more likely that he said “blue ball” instead.

The gig, which was equally as funny as it was musically impressive, made for a refreshing shift in perspective. Whether the whole thing’s improvised, or somehow perfectly choreographed every night, will probably forever remain a mystery.