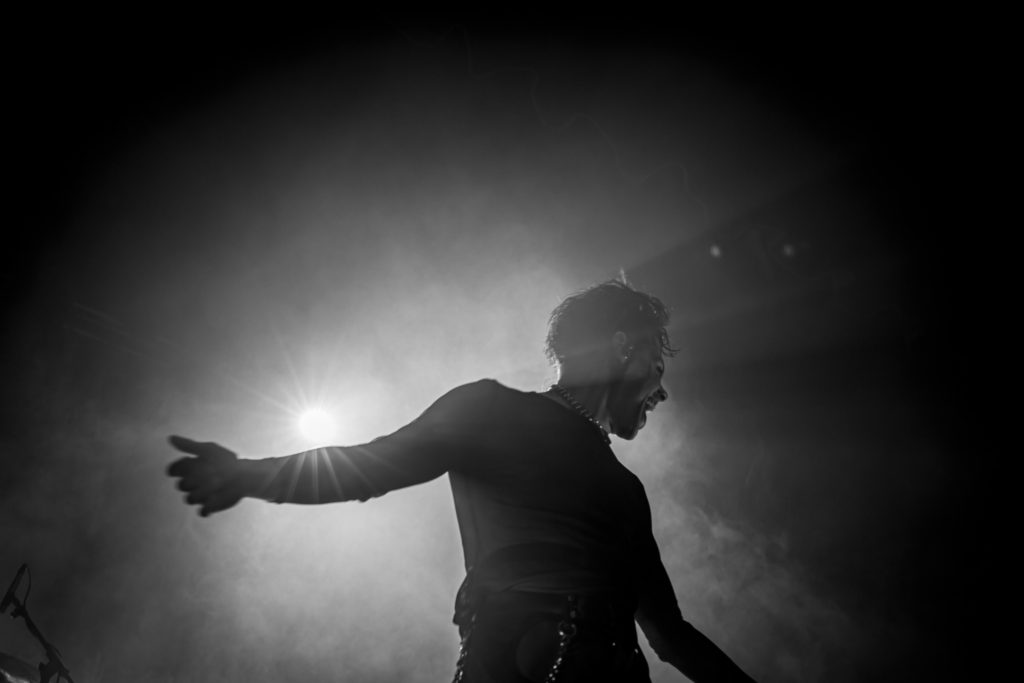 This was going to be an intense and electrifying show from the outset. Fusing two exceptional acts who truly put their soul into their craft can only have one possible outcome; a celebration of community spirit undercut with the knowledge that you’re part of a night which could never be recreated. The O2 Ritz’s bouncy floor became a springboard for the audience, who immediately matched the infinite energy of Saint Phnx and Yungblud.

In the venue, gaining a position at the barrier became a badge of honour for the most dedicated Yungblud fans. Some had been there as early as 9:00 am that morning. This intense fandom is a different breed. United in their matching black and pink attire, it’s a group where anybody and everybody has a place. One audience member even had ‘Loner’ written on their head, referring to Yungblud’s release earlier this year. He’s become an inspiration for many, and for good reason – he genuinely cares about his fans. A singer so caught up in his performance and constantly grinning with pure enjoyment is a pleasure to watch.

Scottish rockers Saint Phnx are a duo to be reckoned with. Keeping in with the family, Stevie Jukes provides the vocals and is a multi-instrumentalist, while his brother Alan backs him up on the drums. The Wishaw natives are the most exciting offering to modern rock to come out of Scotland since Biffy Clyro, and with charismatic fluidity together on the stage, they are certainly ones to watch.

Yungblud has become an inspiration for many, and for good reason – he genuinely cares about his fans.

The two lit up the stage with ‘Death of Me’, an electronic beat-fuelled number. Stevie Jukes paid tribute to Yungblud by wearing his signature Underground creepers. They bore a further similarity to Harrison, as they powered through their set with unmatchable energy. It was almost cinematic, as the lights strobed systematically with the rhythm of the beat. Alan Jukes threw his drum stick to the guitarist joining them on this run of the tour, who caught it, while Stevie swung the mic around his head like a windmill.

Their high-powered rock anthems proved popular with the crowd. However, in ‘Sorry’ they expressed a more emotional side with hard-hitting lyrics such as, “You were in the way and I was just praying for a better day”. Stevie told the crowd to light up the room, got his phone out and filmed the touching song, immortalising the moment.

The Wishaw natives are the most exciting offering to modern rock to come out of Scotland since Biffy Clyro.

‘Mountains’ allowed drummer Alan to show his vocal prowess, and he took a bow after his soft melodic voice died out at the end of the number. Midway through ‘Nunchuk’, they split the crowd in two, half representing Stevie and half Alan with their own melody to sing. The final song was announced as a track about Brexit, which was very topical. The audience responded by chanting anti-Brexit rhetoric, holding aloft “F*** Boris Johnson” signs. They were told to put their arms around each other and jump when the beat dropped, successfully creating a community, which was the basis of a memorable show.

They’ll be returning to Manchester on the 23rd of February next year at Deaf Institute – get your tickets while you still can.

Pink flags being strung up on the stage could only mean one thing. The sound of helicopters heralded Yungblud’s entrance, alongside men joining him in black outfits and pink balaclavas. He stormed into ‘21st Century Liability’, before anthem ‘Parents’, a hip-hop and rock combo, saw the crowd sing along to “Tick-tock, stop the clock/ Because I got the feeling that I’m gonna get shot”.

The set was littered with some of Yungblud’s latest hits and the past favourites that put his name on the map. ‘King Charles’ followed the political sentiment which began earlier, as Harrison held up the ‘F*** Boris Johnson’ poster which had been thrown on stage.

The love was shared around between both the audience and bandmates as Harrison sealed the deal with his lead guitarist Adam Warrington by giving him a kiss. Before ‘Anarchist’, Harrison added to the sentiment calling the crowd “his family’, he told them, “Put your arms around everyone even if you came on your own. Feel the love, we are united, as there’s too much division in this world, these people got your back no matter what.”

‘Polygraph Eyes’ saw the audience hold up their hands like hearts, mimicking Harrison himself. A slow ballad showcasing his vocal skills and following through his intention of being as hard-hitting as an episode of Skins, it’s a mature approach to the topical issue of sexual assault.

As Yungblud left the stage, the mock radio first heard in the introduction was used again, proclaiming: “Danger, trying to locate [Yungblud]. He’s extremely dangerous.” His balaclava-wearing crew powered into the middle of the crowd brandishing guitars and mics, as he exclaimed that his job as an artist is to “lose the barrier between me and you”, serenading the crowd with the track ‘Kill Somebody’.

He may not have had fellow artist Machine Gun Kelly by his side but this didn’t stop him tearing up the stage with certified banger ‘I Think I’m Okay’. He followed it up with personal track ‘Casual Sabotage’, sitting on a pink stool complete with an acoustic guitar. He said, “This song is f***ing important to me and a message from me to you as each of you saved my f***ing life. I was called a freak or a reject but I don’t feel like that because I have you and you have me.” During ‘California’ Harrison held up the pride flag and punched the air, overwhelmed by the appreciation from the fans, continuing the community spirit which was thriving.

He exclaimed that his job as an artist is to “lose the barrier between me and you”.

Penultimate track ‘Hope For The Underrated Youth’ brought Harrison up on the barrier, as the crowd bounced back the cutting lyrics “Would you come and bury me alive”. Making his way back on to the stage he floored the mic stand, symbolically throwing down the gauntlet against future injustice.

He finished the show with ‘Machine Gun (F*** the NRA)’, a lasting reminder that Yungblud will always be fighting against mental health stigma. The band collectively put all their energy into it – Warrington was on the floor riffing hard, whilst Harrison was dousing himself in beer.

Harrison, perhaps, outshined the rest of his band, but they all stood out with their slick playing. Harrison is proving that the future is bright, not just for music but for socio-political issues too, as together we are united, thereby being part of something much bigger.

Yungblud has recently announced three O2 Forum Kentish Town dates in May 2020. Tickets will go on general sale from the 29th of November.