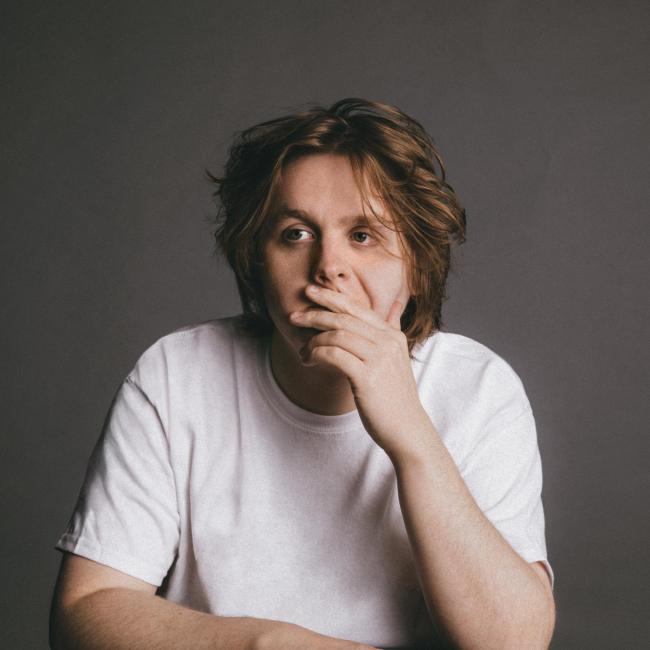 Mixing three different genres into one show was a sure-fire way to create a memorable night. Indie rockers The Snuts showcased a set filled with gritty riffs, Grace Carter brought her soulful and empowering voice to the show, and finally, Lewis Capaldi expertly concluded the night by wedging his signature humour in between a collection of powerful and emotional tracks.

The first band to take to the stage were rising indie band The Snuts, who hail from Lewis Capaldi’s home country of Scotland, which is spawning some of the most exciting acts in the music scene right now. Recent riff-heavy release ‘Juan Belmonte’ was recorded with Rich Costey, who’s worked with the successful bands Muse and Biffy Clyro.

Their set proved it’s still possible to put an original spin on old school indie rock, while retaining the ability to generate hits. Featuring gritty riffs, drums thumping like a heartbeat, and a Lewis Capaldi doppelganger for a frontman – it’s not hard to certify this band as the future.

They kicked off with catchy opener ‘All Your Friends’, which saw vocalist and guitarist Jack Cochrane put everything into the performance. He affirmed their heavy approach to draw the crowd in by commenting afterwards, “someone’s gonna break an arm or something” – a true hallmark of a rock show but thankfully, the only damage done was the possible breaking of hearts belonging to their new fans.

Despite joking that a “pub flash got a bigger applause” than their music, their summer festival tune ‘Maybe California’ proved a hit – which is only natural given it’s featured on Spotify’s ‘The Indie List’ alongside the likes of Jake Bugg. The slowest and saddest song was their heart-wrenching track ‘Boardwalk’. With lyrics such as “I’ll protect you from this cold heart” and “I know sometimes it’s easy”, it was a slow melodic song which gave the feeling of being next to a tranquil ocean.

If you’re a fan of Viola Beach or Ten Tonnes then be sure to give this band a listen. In contrast to drummer Jordan Mckay missing the drumsticks as he threw them in the air at the end and attempting to catch them, this band is making all the right moves.

Boasting the same management as Lana Del Ray and Dua Lipa, as well as touring with the latter, Grace Carter is quickly putting her mark on the R&B and soul field. Carter has always been dedicated, performing from age 14, turning her bedroom into a makeshift studio and attending music college.

Her leading song ‘Don’t Hurt Like It Used To’ saw pink lights surrounding the stage as her voice echoed around the room before she made her dramatic entrance, setting the tone for the show. The audience swayed to the song, as she danced on stage so lost within her own music. Her inspiration may have come from a darker place, however, she has transformed it into an inner strength. ‘Fired Up’ offered a change in tone, one of emotion and possibilities. As Carter sang “Because I’ve never felt like this with anybody”, she was surrounded by billowing fog which appeared lilac with the light shining upon it. It was beautiful and her hip shake at the end may well have been a victory dance, as she was off to a flying start.

Her inspiration may have come from a darker place, however, but she has transformed it into an inner strength.

Before she could get into her next track, she announced that she loves Manchester and was here two years ago with Dua Lipa. Her cover of ‘Wicked Game’ by Chris Issack, which you may have recognised from the last season of Love Island, went down well. Left to sing with just her bandmate Darren James on the keyboard, the crowd’s phones all shot up to capture the song. Final track ‘Why Her Not Me’ was explained to be “about [her] dad leaving for another family”, and emotional as ever, she used hand gestures to pour her heart out, crouching on the stage while singing “What did I do for you to wreck it all? Oh Lord, it’s not my fault”.

Grace Carter is certainly one to watch and if you’re looking for an artist similar to Becky Hill or Zak Abel with a fresh new perspective, then give her a listen. Furthermore, she’s set to head on her headline tour in March, and you can purchase your tickets here.

Only Lewis Capaldi could carry off playing a fittingly cringy track like ‘True’ by Spandau Ballet before he even set foot on stage. The introduction quickly changed into dramatic choir-like music with flashing red lights, to keep the theme of his debut number one album Divinely Uninspired to a Hellish Extent. In his usual contrast to deep emotional tunes, Capaldi’s personality took over once he was on stage and he signalled the beginning of the show with a dab to the crowd. He quickly found his feet, showing off his impressive vocal range with hit track ‘Grace’.

Song ‘Forever’ saw blue lights flickering as Capaldi swapped to an acoustic guitar, members of the crowd holding blue pointer fingers to the sky and Scottish flags to show their support. It was an especially moving track as he sang “Nobody said it would last forever/ That doesn’t mean we didn’t try to get there.”

His songwriting is the rawest out there, but his comedic personality contrasts heavily with his songs. Before he could launch into ‘One’, he took time to offer some light relief by pretending to kick a football, throw darts and even hurdle – much to the crowd’s delight. His set was undercut throughout with witty remarks, introducing himself again, “for those who don’t know me and have been dragged along and wondering who this chubby guy on stage is”. The self-proclaimed ‘America’s Sweetheart’ appears to have a heart of gold.

His songwriting is the rawest out there, but his comedic personality contrasts heavily with his songs.

Despite initially arguing against releasing an extended version of his debut album, it was released on the 22nd of November with three new tracks. One of them was ‘Before You Go’ and his self-described most personal song yet, which shot to number one at the Official Trending Charts. The nation’s appetite for a well-executed sad song will never be sated. It was the third time he’d played it live, and as his face contorted with emotion it was easy to see the heartbreak behind it. The track is about the aftermath of his aunt’s death by suicide when he was a child, and is a mature exploration of grief.

Penultimate track ‘Hold Me While You Wait’ was announced as one of his favourites on the album. The ballad pulls at your heart-strings as the soft piano, strumming and vocals mesh together. It draws you in and forces you to relate to your own experience, making his music so personal yet universal. The set was finished with the breakthrough phenomenon ‘Someone You Loved’ which spent 7 weeks at the top of the UK Singles Chart.

The ballad pulls at your heart-strings as the soft piano, strumming and vocals mesh together.

Capaldi reminded his fans that it is number one in America right now and has been nominated for a Grammy. It was evident that his music is popular with all ages, as two 9-year-old audience members called Ben and Hannah realised he’d sworn during the show and were sought out by Capaldi, who told them “swearing isn’t cool but underage drinking is”. Their mum shook her head in disbelief, Capaldi undoubtedly joking. His ability to move a crowd can’t be knocked, nor can his willingness to offer his heart, and in turn, reap the rewards.

His ability to move a crowd can’t be knocked, nor can his willingness to offer his heart, and in turn, reap the rewards.

All three bands had shown that the future of music has so much more to offer. Capaldi, in particular, is been a musical enigma – he doesn’t need any special effects to thrive. In a world full of superficiality it’s perfect timing for his star to rise. He announced “My sweet fans, sweet boys and girls my show is over”, we have nothing to worry about as he’s “never writing happy songs they stay sad forever. Sounds like it should be on a t-shirt”. He may have identified a possible merchandising opportunity!

Capaldi embarks on tour again in March and will be at Sounds of The City in Manchester next year too. Grab your tickets to witness his talent firsthand, but be sure to remember your tissues.