You are here: Home / Culture / Music / Review / Ready The Prince & Cleopatrick @ Gorilla review – a night to show rock is proudly alive and kicking 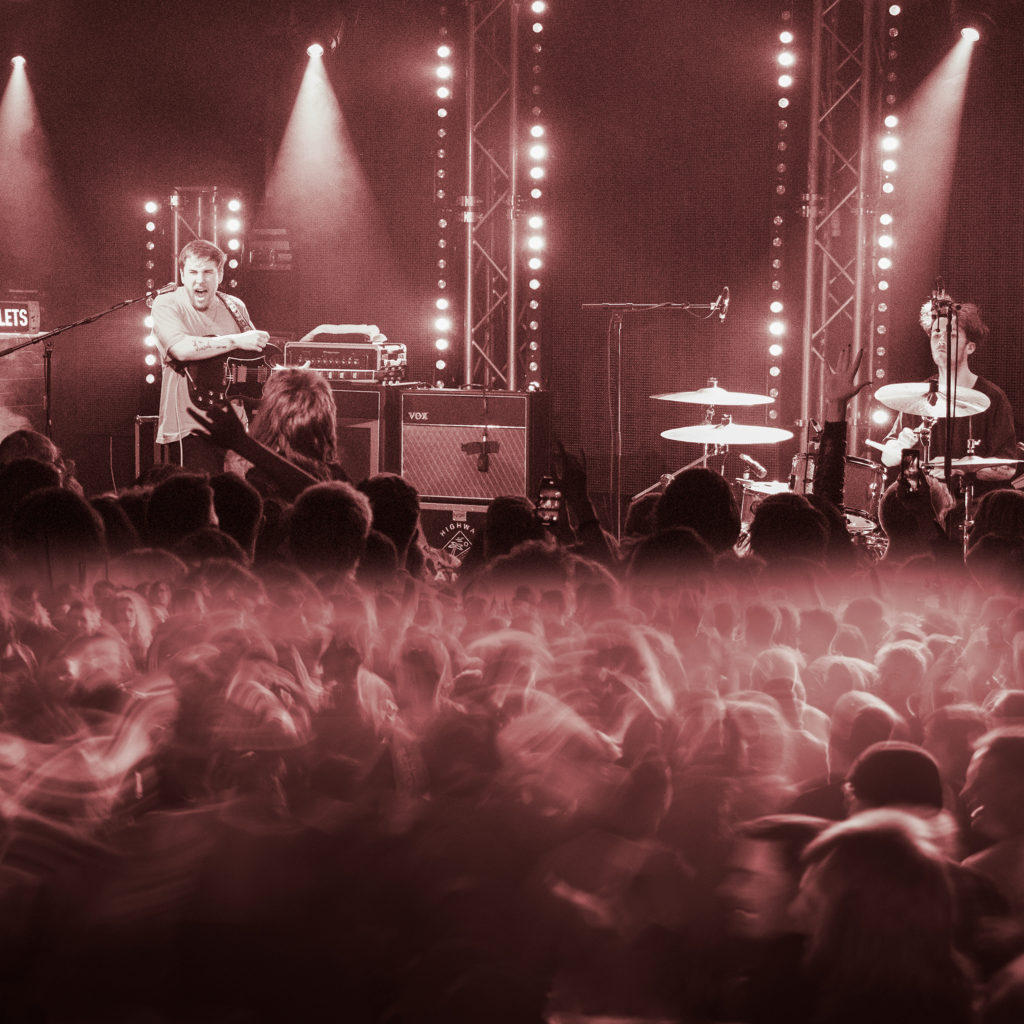 A venue that was almost lost due to the pressures of lockdown, it’s touching that Gorilla is still recognised as a hub for the brightest stars in the business, and essential to Manchester’s music scene. Two bands made their way from across the pond to play to around 700 passionate fans. After three years, the anticipation was already high for their return.

The lockers may have disappeared under refurbishment but in its place was a new flickering lighting system, which only highlighted the venue’s character. A few mirror balls are strung from the ceiling as a symbol of community and escapism, which is exactly the sort of night the audience got. Viewing the show from the fold-down cinema seats on the balcony, it was a night to show rock is proudly alive and kicking.

Travelling from Toronto, Ready The Prince was ready to give the Manchester crowd what they wanted – a heavy dose of high-powered tracks to warm them up before Cleopatrick could take to the stage. The trio are longtime friends of Cleopatrick and after three years, it was more than time for them to both return to the UK together. Describing themselves as the ‘New Rock Mafia’, throughout their set they proved they had a claim to this title.

Opening the night with ‘Backslider’, it was almost evocative of Pierce The Veil’s pop-punk emo days with a sharp rock edge, especially with Daniel Prada consistently hitting the right notes on the guitar. The crowd was cheering from the get-go and the band was headbanging along in unison. From the carrying vocals characteristic of the genre courtesy of Stephen DeCiantis in ‘Regicide’ to the crashing drums in ‘Teena’ – it’s the musical rollercoaster you never wish would end. During their set they also took the crowd on a whistlestop tour from overcoming despair to the changing moods of relationships – it wasn’t a set for the faint-hearted.

This was echoed by the riotous crowd below, with a mosh galore encouraged by Cleopatrick’s Luke Gruntz. Their track ‘Pray’, also saw both members of Cleopatrick supporting them from the wings, reminding others of their longtime friendship. Finishing with ‘Lightning’, it was clearly a crowd favourite and enough to cause others to seek their new album once it’s released at some point over the next two years. Ultimately, this band would take the crown for the most enthusiastic and successful support act.

As soon as they saw Gorilla after first playing a gig in Manchester, Cleopatrick knew they wanted to play there. Consisting of Luke Gruntz on vocals and guitar, & Ian Fraser on drums, they’ve quickly garnered a cult-like following for their expertly-crafted heavy-rock tracks. The tour was a chance to finally perform their long-anticipated debut album, Bummer (2021). As well as treating the crowd to new favourites, they didn’t make the mistake of forgetting their old classics, such as ‘Youth’ and ‘Hometown’.

Chanting “Cleo” as the duo took to the stage, the bass was so loud that the room was shaking as they opened the show how they meant to go with, ‘Ok’. In almost ‘The Floor Is Lava’ style, the whole floor was a moshpit as the audience jumped to ‘Good Grief’ – including the duo on stage. After making music together since they were teenagers, it explains their clear chemistry. The crowd couldn’t get enough of the band throughout the set, which was very obvious during ‘The Depths’, which prompted a very energetic circle pit – a hallmark of a Cleopatrick show.

Featuring a drumming intro in ‘Why July’, which almost sounds like Arctic Monkeys ‘Arabella’ and was a much-needed slower number to start with. It was a more moody track to mellow the crowd for a brief interlude before it quickly contrasted to make the change of pace even more dramatic. Citing bands and genres such as Arctic Monkeys, AC/DC, and even Hip Hop as their influences, it’s this unexpected mix that makes them so unique. Not including the fact that every time you looked away from the band, it was hard to believe that it was just two musicians on stage, due to how full they sounded – modern-day sorcery, or rather just pure talent.

Checking with a fan before blasting into a new one, ‘Zuck’ the crowd were overhead clapping from the start – already showing their appreciation for the new one. Gruntz almost appeared possessed by the beat, flailing around while singing, “I’m gonna lose my mind”. Smiling knowingly before they launched into ‘Hometown’, it was accompanied by flying bottles and multiple mosh pits.

After both giving it their all, Fraser stepped out from behind the drum kit to thank the crowd for the energy with his hand on his heart. Half the usual amount of members in their band, needn’t mean half the showmanship. Kindly giving everyone a chance to catch their breath with ‘Doom / 2008’, it may have been slower but certainly didn’t slack emotionally. It was also a chance for Gruntz to show off his vocal prowess.

Another pit opening on the beat drop, Gruntz was seen mouthing “Go!” to the crowd, as they launched into ‘Bernard Trigger’. Another circle pit made an appearance with the crowd literally running wild, it’s this element of unorganised chaos that makes the live experience of Cleopatrick even more exciting. Encouraging the audience to match their wonderfully unpredictable and volatile energy right until the end with ‘Peppers Ghost’ – where even Ready The Prince’s Prada checked in with the crowd before crowd surfing to their track.

The last song before the encore could only be ‘Youth’, a track that quickly charted the band’s rise to success after its release. It has to be noted that, even though the topics they tackle are as profound as high school regret, it’s this feeling shared by others that incites the community spirit in their set. Before they could dive into it, the crowd was loudly chanting “Cleo” to show their well-deserved appreciation for the band. After the energy had reached an all-time high, a member of the band’s entourage was chucking much-needed water over the crowd.

The most unexpected encore perhaps witnessed at a gig was thoughtfully prepared by them for their loyal fans. Everyone’s phones were out to immortalise the moment of both bands coming together to cover Arctic Monkeys’ ‘505. Certainly making Turner proud, it had been a night of surprises and memories made. Each band can count on a warm welcome the next time they return to Manchester.

Cleopatrick’s latest album Bummer is available to stream on Spotify.