You are here: Home / Culture / Music / News / Review / Stormzy @ AO Arena review and gallery – he will never be too big for his boots 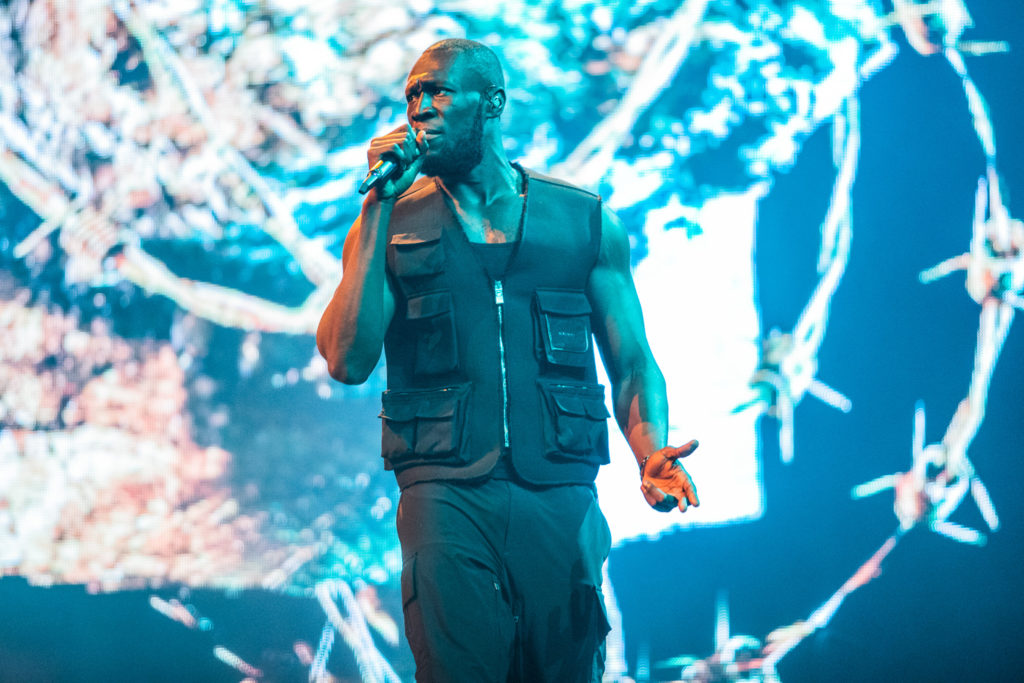 Proving that three times is a charm, Stormzy’s rescheduled performance at Manchester Arena was a reminder of the power of community uniting us together. After already proving his mettle with a headlining Glastonbury performance and highly praised Leeds and Reading Festival headline slots, the expectation was already high.

Throughout his performance, Stormzy, a.k.a Michael Ebenezer Kwadjo Omari Owuo, made it his mission to celebrate ‘Young Black Kings’ and the power of music. Spurring the crowd on before Big Micheal could make his way onto the stage, Rachael Anson accompanied by Radio 1 Xtra DJ Remi Burgz on MC, listed off their high-energy repertoire, which ranged from chart numbers to classic rap.

Finally touring his latest album, Heavy Is the Head, the arena was filled with over 20,000 fans ready to hear Stormzy live. Opening up with ‘Big Micheal’, he emerged on stage to a roar from the crowd. You could also see a gold heart in chains on the massive board behind him, which was quite fitting – he’s known for putting his heart into all he writes, from tackling gang violence to knife crime. Furiously spitting the last verse with a single spotlight on him, the crowd couldn’t cheer enough.

The various large screens were particularly adept throughout at capturing Stormzy’s grinning face, which reflected the obvious joy present on the audiences’ faces. Largely reaping the rewards of Heavy Is The Head through lockdown, you can almost understand Stromzy’s clear disbelief. The large crown suspended from the ceiling was lowered for ‘Rachael’s little brother’, reminding the crowd of his sophomore album’s title and the weight which Stormzy bears.

Checking in at key points through the gig that his ‘Energy Crew’ were in the building, he was literally high-kicking his way to his most memorable show yet. Red fireworks and flames galore, no expense or use of pyrotechnics was spared during his biggest headline show yet. Consistently listing off hits such as ‘Know Me From’, kept the adrenaline high.

Before he could launch into ‘Handsome’, he ordered the crowd to have their “hands up and bounce!” With spotlights following him around like the crowd’s eyes, they were keen to give their all throughout the show.

Setting the record straight with ‘First Things First’, it’s clear that he is “a rebel with a cause”. He may have “been gone for a while”, but showing up under the spotlight with his words printed on the screen behind him, only hammered his message home. Adding a bit of brass to ‘Own It’, he brought the club with him. Determined to let everyone know how much he loves them, Stormzy also made it his goal for everyone to leave with memories. On reflection, he clearly succeeded.

Known for wearing his faith on his sleeve, the six backing singers providing a glimmering gospel part of the gig beautifully captured the emotional element of his music. Their influence on ‘Crown’, ‘Superheroes’, ‘Cigarettes & Cush’, and their addition to ‘Blinded By Your Grace Part 2’ made the show particularly moving. It was almost biblical hearing them sing ‘Do Better’, which featured a curtain of shimmering sparks behind them.

Keeping in mind his audience’s age range throughout the venue, there were two songs in his setlist which almost every one would recognise, diehard fan or not. ‘Rainfall’ featured a sample of ‘Shackles (Praise You)’, immersing the crowd into this soulful number. ‘Superheroes’ also features a sample from Tracy Beaker which was very nostalgic. Each proves his ability to mix unexpected creativity with a powerful message.

It couldn’t be a Stormzy set without ‘Big for Your Boots’. The image of him smiling while finishing the track as smoke blows towards the sky behind him – only reminded us that he is the most genuinely lovely artist on the circuit.

This was further proved by a special guest. Leeds and Reading may have seen him bring out Dave and Jack Grealish, but we were treated to a guest more special and even closer to Stormzy’s heart. Crediting his success to his manager ‘Big Trev’, he introduced him on stage and got the audience to join him in singing him a happy birthday. Reminding the crowd of his roots with what he calls ‘Fire in Manny’ which is also known as ‘Shut Up’. Going from the park to the arena, he ended the track scatting with the crowd.

In asking the audience if he could do one more song, his final track was to be the jewel in the crown of the evening. As he jumped into the revered ‘Vossi Bop’ every fan was on their feet dancing and singing as loud as they could. With countless additions of fireworks and confetti which swirled around the arena, it was even more memorable than anyone could have expected.

What truly topped the night off was Stormzy jumping into the crowd after his final track. Making his way around each and every side of the stage to make his appreciation for his fans known, it’s a testament to how well he carries himself. 10 mins after finishing, the crowd was still chanting “Stormzy”. Spending so much time with fans after is certainly an uncommon practice for most mid-sized venue headliners; as for arena-sized – it’s practically unheard of.

A night of celebrating being in the moment, only makes waiting for his forthcoming third album even more exciting. Having earned over 30 awards for his music, he can now add ‘World’s Best Artist Most Untainted By Fame’ to his extensive collection. After showing such appreciation to both colleagues and fans alike, it’s almost certain he’ll stay this way. Heavy may the head that wears the crown be, but it’s far better than having a perpetually heavy heart. As proven by his loyal fans’ reaction, he will always be appreciated for his authenticity – Stormzy will never be too big for his boots.

Stormzy’s latest album Heavy Is the Head is available on Spotify.