You are here: Home / Culture / Music / Review / PLEASURE CENTRE & The Ninth Wave @ YES review – a reminder of how much the band has achieved 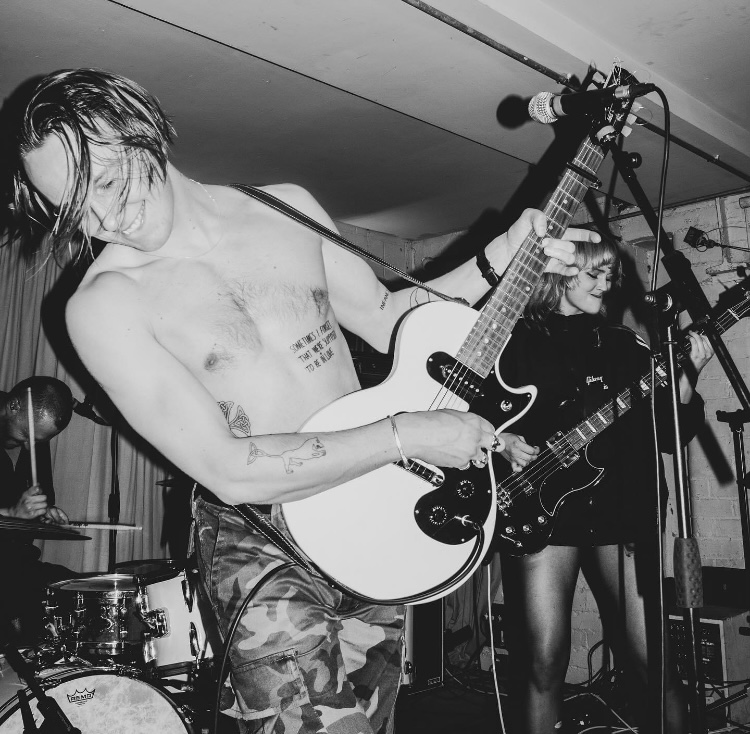 Telling the crowd that this could be The Ninth Wave’s last ever show in Manchester, there was some sadness in the room. However, the overwhelming feeling of joy far outweighed any anguish. Contrary to what gets plastered all over social media, a hiatus needn’t signal a doomed end but rather the beginning of a new and exciting future. With all talented multi-instrumentalists, it’s no wonder they want to fly solo for a period of time and take us with them on their final flight for now. With their latest and sophomore album, Heavy Like a Headache, finally being heard live, it was a reminder of how much the band has achieved.

Set in the Pink Room at YES, the atmosphere was almost as heady and sweet as the bubblegum coloured walls. Before The Ninth Wave could make their potentially last hurrah, support band PLEASURE CENTRE was ready to bring their personal brand of musical delight to the audience. Formed in Scarborough and now based in Leeds, they have their unique take on shoegaze mixed with elements of dream-pop. Citing bands such as My Bloody Valentine, Sonic Youth, and, of course, The Ninth Wave, made them the perfect support act. Classing their sound as ‘Sad & Loud’, they took the crowd through 30 minutes of their passionate and occasionally volatile approach to sound.

Their track ‘Opener’, saw crowd members headbanging from the start, with lead singer Aneela Siddiqui’s arm outstretched to drive home their emotive words. ‘Blue (Bertha)’ also had the edge of a safety pin but the softness from the human heart. High-powered favourite ‘Disease Machine’ saw the band always pulling it back and hammering it down with drums and guitar. Before their set could finish, there was even the appearance of a circle pit to match the rapid tempo of the band.

They also treated the crowd to a new number which they are releasing soon, which already sealed the nod of approval from the crowd. Decisively their best one yet, it left Siddiqui free to roam without her guitar and join the crowd. As the audience cheered for one of their new favourite bands, the band raised their guitars to the sky, rightly proud of their first Manchester show. Showing a lot of promise, The Ninth Wave wasn’t the only band there with their sights set on beginning anew.

The Ninth Wave Theory means a single wave larger than all the others, which has connotations of being legendary, colossal, and unexpected. Legend has it that nothing can compete with their power. This notion more than justified the expectations of everyone in the room. Consisting of Haydn Park-Patterson (vocals/guitar), Millie Kidd (vocals/bass), Kyalo Searle-nbullu (keyboards/synths), and Calum Stewart (drums/synth), their chemistry together as a band is undeniable. Spotted on their synth machine, was a sticker with the words, “I’m ok with failure!”. A band known for painstakingly crafting their songs together and opening up about mental health, they’ve always been content with making music from their hearts.

Before they could get into the set, Park-Patterson and Stewart were already laughing on stage together. It set the precedent for a show between friends and fans alike. The opening track ‘Maybe You Didn’t Know’, saw Kidd and Park-Patterson’s voices fitting perfectly together. Jumping straight into ‘Reformation’, it made for addictive listening and after a member of the crowd surely echoed everyone’s thoughts saying how much they loved the song. Part of the reason must be their penchant for cinematic tracks. Featuring shimmering cymbals, their next track, ‘Everything Will Be Fine’ would be perfect for a movie dreamscape.

A song that hadn’t been performed live before, ‘Heron On The Water’, from their latest album highlights how far they’ve come. Kidd, free from the constraints of her guitar, was singing with her mic from the stand. Park-Patterson may be the official frontman but he’s met his match with Kidd whose magnetic charisma is obvious.

Featuring almost tribal-sounding drums ‘What Makes You A Man’, saw Park-Patterson and Kidd alternating the focus of the track, as well as swapping roles with ease. Both of them had an electronic drum each, driving the crowd into the track. Most fans have been around long enough to immediately recognise the introduction to ‘Sometimes The Silence Is Sweeter’. There was a sense of urgency with the drums and layered vocals and no one could deny their musical skills.

Their first time playing this song in front of people, ‘Come Down Forever’, made this performance even more intimate. Featured on their ‘Happy Days!’ EP, was followed by the more delicate but no less emotional song, ‘I’m Only Going To Hurt You’, which boasts a dance synth beat. It only highlighted how emotion is perfectly captured in their songs and woven into their lyrics.

Bringing it back to the present with another from their latest album, ‘Pivotal’ immediately captured the crowd’s attention with the words, ​​”I’m coming undone, And I’m falling in love”. The feeling captured compared to streaming is felt tenfold by their live performance. Returning to their debut album, Infancy, with ‘All The Things We Do’ and ‘This Broken Design’, each track is a crowd favourites for a reason. Perfect examples of post-punk tracks with a goth-pop core, they were made for the live setting.

After walking onstage for the expected encore, the whole crowd was clapping overhead to the beat for their finale, ‘New Kind of Ego’. It also signalled the return of a circle pit. Bowing after their finish and waving to their crowd, it was a gig for the ages and gave their fans one last chance to sing with their favourite band. Even though they’re headed into a hiatus, the band ultimately, rejoiced in a celebration – remembering everything they’ve achieved together and what they’re yet to do next as individuals.

Whether they reunite sooner or later, their legacy as The Ninth Wave so far will be of indisputable hard work and boundless creativity. Creating dreamy soundscapes that pinpoint your mood before you know it, there aren’t many artists that can harness this ingenious ability. We’re looking forward to hearing what they achieve next as we wave goodbye to the band for now.

The Ninth Wave’s latest album Heavy Like A Headache is available to stream on Spotify.