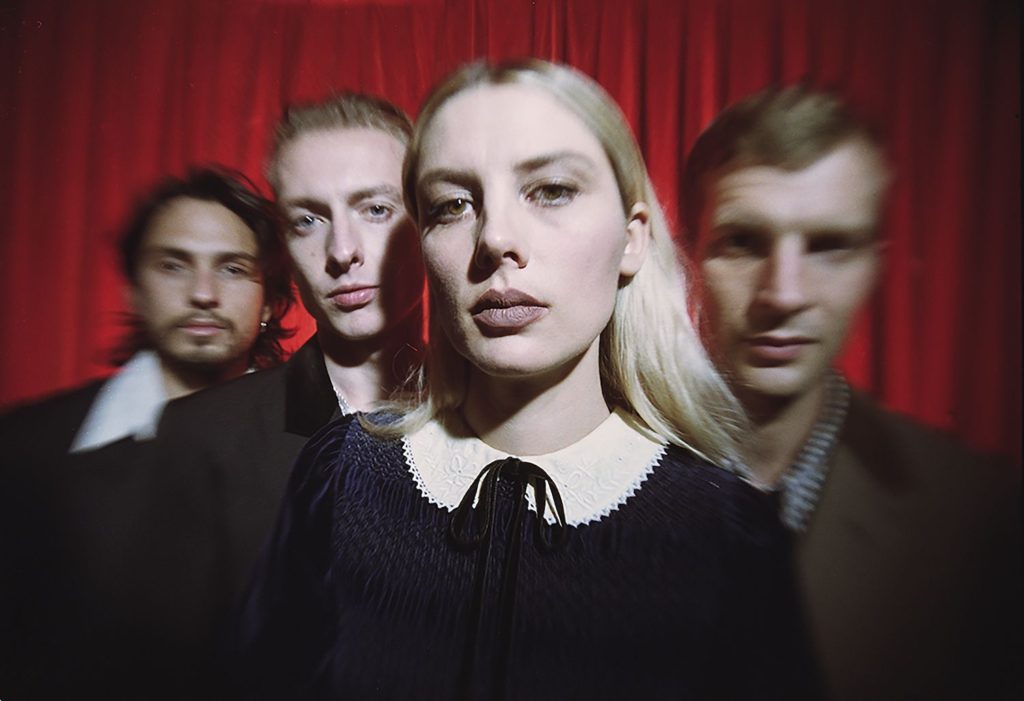 If both fans and a major publication like NME are awarding an album 5 stars and citing it as “a stone-cold masterpiece full of confidence and magic”, then you know that you’ve stumbled across something special. After releasing their number 1 album, Blue Weekend (2021), Wolf Alice has proven they are both multifaceted and united in their direction for well-deserved acclaim.

The eleven-track list is as follows: ‘The Beach’, ‘Delicious Things’, ‘Lipstick on The Glass’, ‘Smile’, ‘Safe from Heartbreak (if you never fall in love)’, ‘How Can I Make It OK?’, ‘Play the Greatest Hits’, ‘Feeling Myself’, ‘The Last Man on Earth’, ‘No Hard Feelings’, ‘The Beach II’.

Ten years may have passed since Ellie Rowsell, and Joff Oddie began the band as a duo, however, their passion for music is as strong as ever. After adding Joff Oddie and Joel Amey to the group, they released their breakthrough debut album, My Love Is Cool (2015). A perfectly crafted indie-rock album peaking at number two in the album charts – the band was only just beginning. Following it up with Visions of a Life (2017), it followed the success of its predecessor and was awarded the 2018 Hyundai Mercury Prize.

A band who can capture their sound in both a studio and live setting, they performed at 187 shows on their Visions of a Life tour. Having various sold-out shows including Alexandra Palace, Brixton Academy, and Pyramid Stage at Glastonbury – it’ll serve them well on their forthcoming set at the infamous Reading and Leeds Festival.

With such successful releases, you’d understand if the band were slightly apprehensive about matching them – although, they needn’t have worried. Adding towards their award-winning streak, they’ve once again been shortlisted as one of the 12 Albums Of The Year for the 2021 Hyundai Mercury Prize.

After picking an Airbnb in Somerset and retreating there to hone their craft for album three, it acted as a reflection of who they were and what artists they wanted to be. Working on demos in a converted church became the basis of Blue Weekend. As London went into lockdown due to COVID-19, so did the band as moved to the studio. Produced by Markus Dravs (Arcade Fire, Bjork, Brian Eno, Florence, and The Machine), his expertise can be listened to on the album and is bolstered by Rowsell’s vulnerable songwriting.

If you were wondering why the album is titled ‘Blue Weekend’, it was actually inspired by a sunny spell in Belgium. The opening track, ‘The Beach’, begins with soft strumming and builds up to discuss the possible finite nature of friendships. The natural background of the track perfectly fits with the theme of growth which is expected in your twenties.

Stand out track ‘Smile’, is more of a heavier hitting track, proving the band can easily carry off their soft-pop sound as well as a grittier punk groove. Tackling assumptions and acting as a reminder for others to stay true to themselves, it’s a message for the ages. As Rowsell proclaims, “I ain’t ashamed in the fact that I’m sensitive, I believe that it is the perfect adjective.” It subverts the narrative of women in particular, being labelled as sensitive with unnecessarily negative connotations attached. Their track ‘Play The Greatest Hits’, also showcases their natural prowess for grunge-driven tracks, reminding us that their sound is truly limitless.

Soft-pop track, ‘Safe From Heartbreak (if you never fall in love)’, heralds Rowsell’s version of a break-up track. The theme may be regarded as cliche but their efforts are anything but. It’s wonderfully raw and Rowsell’s soaring vocals almost mimic a choir in places. It’s delicate in comparison to their previous track ‘Smile’, but they still harness a formidable power. Perhaps some would reprimand a music writer when they brand an artist’s new album as ‘honest’, as it’s an adjective often thrown around. Although, an exception would have to be made for this album which showcases a rawness not quite captured in their previous material.

After recognising the almost cliche of women writing about heartbreak but running with it, the audience is gifted the chance to glimpse another side of Roswell with ethereal honesty. Their track ‘Feeling Myself’ acts like a symphony to self-love with wonderful notes of electonica, as the narrator enters the other side of the break-up tunnel.

A soft piano and twinkling backing instrumentals accompany Rowsell’s soft vocals on ‘The Last Man on Earth’. Addressing selfishness and narcissism, the track almost seems to question what lengths someone would go to in the pursuit of wealth and if that would even equate to happiness.

Their final track, ‘The Beach II’, offers the flipside of their opening track. Celebrating the power of female friendships, it offers the listener a feeling of contentedness with the circularity of their journey through the album. The consistent natural imagery painted through their lyrics is as clever as they are beautiful, such as “And the sun goes down, as it must come up, Consistеnt like the laughter”.

Each track is beautifully cinematic and it’s no wonder why. While crafting their tracks, they put videos on YouTube on mute and played their tracks over them to see if they fitted the vibe they were ready to capture. The final words on the album, are Rowsell noting that: “It’s okay” – and it really is after they’ve found their happily ever after as detailed in the track. Feelings may change like the weather, however, friendships and a passion for music is timeless.

If you’d like to experience the band’s latest album live, then you’re in luck as they’re set to embark on a UK and Ireland tour in January 2022. Most of the dates quickly sold out, however, a few new shows have been added. Act fast to avoid disappointment.

Blue Weekend is available on all major streaming services and it is available to purchase on all format here.

Keep up with Wolf Alice: