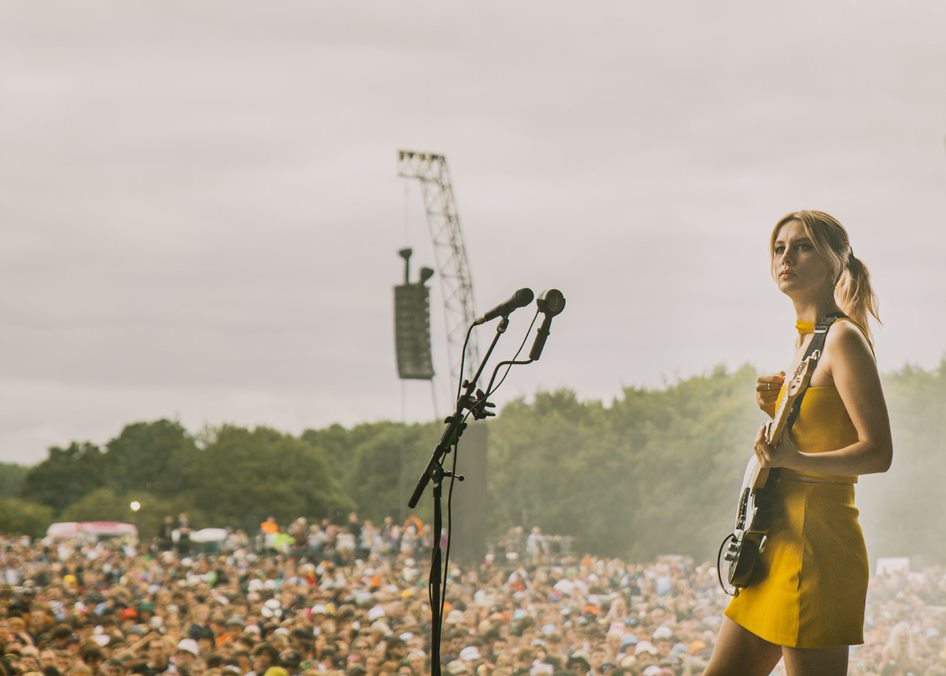 After over 18 months without live music or festivals due to the pandemic, the bank holiday weekend was strongly pencilled in for many as the return of Leeds and Reading Festival. After the recent successful pilot of Download Festival, a new glimmer of hope was shed on not only the possibility but the safety of live music.

There may not have been a mask in sight – but there were some safety precautions in place to offer some peace of mind, including checks on COVID-19 status before entry to the grounds.

As the first day of the festival took hold, it was perhaps the moment of reckoning for one of Britain’s biggest festivals, onsite at the hallowed Bramham Park. Any audience members with even a hint of doubt needn’t have worried – twice the main stages certainly equalled to twice the array of world-class acts.

Big names such as Biffy Clyro and Liam Gallagher topping the bill certainly added to the anticipation. Although, any festival-goer knows that one should always be on the lookout for hidden gems – such as Lauran Hibberd and Blondes.

Opening up the festival on the Festival Republic stage, Nottingham-based band Blondes instantly proved that they had the charisma and smooth melodic grooves to instantly enthral the audience. They got the audience clapping overhead from their first track, ‘Minimum Wage’. It showcased perfect harmonies and proved that they’re as polished in the studio as they are on stage.

It has to be noted that their attire of neutral coloured t-shirts, shirts, and jeans, perfectly matched their laidback tunes. As they delved deeper into their discography, the number of audience members kept accumulating, packing out the tent. Always moving about well on stage, they are clearly natural performers and can easily translate their emotions into their music – as shown with ‘Coming of Age’.

Another of their classics, ‘Easy Days’ was accompanied with warm coloured lights and despite it being better than the cloudy weather outside the tent – the atmosphere could also be penned down to the multi-instrumentalists at work.

By the end, a few members were trying to dance mosh in the middle of the tent. Committing to the festival spirit, a few started cheering while shirtless. The band got the audience overhead clapping before building up the finish with the drummer driving the beat home – a fantastic beginning to the festivities.

The Isle of Wight native is known for being unintentionally iconic, her sausage dog printed, pink Marshall amp was placed pride of place in the centre of stage. Introduced as an artist who is adored by both Radio DJ’s Annie Mac and Jack Saunders, Lauran Hibbard entered kicking her legs and dancing on stage.

After launching into track, ‘Bleugh’ and telling everyone else that they should jump about too, it wasn’t long before they were joining in. ‘Charlie’s Car’ is a newer offering and was another chance to show Hibberd in her natural habitat – just having fun on stage and enjoying every moment.

‘You Never Looked So Cool’ may have been described as a “depressing song about her own funeral”, but it certainly didn’t dampen the festival vibe. Its slower rhythm was no less impactful and showcases how in harmony the band is. Her track ‘Boy Bye’ contains perfectly tongue-in-cheek lyrics and was introduced with her usual off-the-cuff banter, including an inside joke about drummers.

Her final track ‘How Am I Still Alive?’ was well requested by the audience and we were reminded to remember Lauren Hibberd’s name else she’ll be annoyed – after a set filled with ingenious hits, the only thing we’ll be temporality forgetting is to add any other artist on repeat.

Wolf Alice has consistently been the frontrunners of the British indie music scene. They’ve dominated every stage they’ve set foot on, including the Pyramid Stage at Glastonbury – expectations for Leeds had every reason to be high.

Making sure your weekend is anything but blue, the award-winning band kicked off their set with their track, ‘Smile’. Its pop-punk sound was wonderfully jarring in comparison to the country-sounding ballad they entered onto. Topped off with thrashing guitars and flashing lights in time with the best, it’s the empowering attitude of guitarist and vocalist, Ellie Rowsell reiterating that, “sensitive is the perfect adjective”, which signalled their amped-up set.

As they worked through their set, their old favourite ‘Beautifully unconventional’ was a clear hit with the crowd. Some of their latest albums may differ from their softer indie beginnings but it perfectly captures their unapologetic creativity. Honing in on a member of the crowd, Rowsell said: “Bottle of rose in each hand and that’s my energy here.”

‘How Can I Make It OK?’ was beautifully soulful and saw the audience waving their arms with the slower number. Their genre-bending tendencies certainly don’t disappoint while away from the studio. ‘Last Man On Earth’, was also raw and the clouds overhead made it even more atmospheric.

Ending on ‘Don’t Delete The Kisses’, it was the quintessential finish. A set containing mosh pits, well-executed guitar solos, and Rowsell’s voice filling the field – it was an emotional rollercoaster, which left us wanting more.

A stage set up with plenty of red amps, however, it’s the giant red duck with a mohawk in the centre that probably captured the crowd’s attention the most. The Leeds app may have said 18:20, but Yungblud runs on his own time, which makes sense as for the next hour we were invited into his world. At 18:31, the audience was cheering and he announced on the screen, “Welcome back, have you missed me? Because I’ve missed you!”, and “Are you ready to celebrate every ounce of your being?”

He entered wearing a mesh top, The Cramps t-shirt, skirt, and sunglasses and opened with ‘Strawberry Lipstick’. Bright orange flames and a moshing audience which was just as explosive, the love was reciprocated on stage between Yungblud and bandmate Adam Warrington. He’s long proved he can command a stage and is always darting around, he wanted the “biggest f***ing pits of the weekend.” It’s exactly what he got.

A creative artist painted with eyeliner and lipstick, his smile was constantly beaming. His track ‘I Love You Will You Marry Me’, saw the crowd word perfect, and one of his newer tracks, ‘Mars’ had the screens showing his fans singing his lyrics back – it was dedicated to “anybody who ever felt like they never mattered”. Clearly, he’s found his people. His latest track, ‘Fleabag’ saw Yungblud teaching them the chorus and the fire literally igniting the moment.

Everyone showing their tongues and doing the L sign for ‘Loser’ was as commonplace at a Yungblud show, as much as his tambourine. Virtual surprise guest Machine Gun Kelly accompanied him on ‘I Think I’m OKAY’, which was wonderful considering his “brother from another mother” couldn’t attend.

Final track ‘Machine Gun (F*** The NRA)’ saw him pouring water, spitting it at the audience, and ordering the crowd to mosh while chanting “F*** Covid”. Proud to be from the North, it was a set definitely worthy of his mic drop at the end.

Perhaps the artist on everyone’s lips, Liam Gallagher certainly has a reputation that precedes him. Associated with 90s hits and a sneering attitude, he entered walking onto ‘Fuckin’ in the Bushes’, while sporting sunglasses and a kagoule – this set may be the closest we’ll ever get to a time machine excluding Back To The Future.

A particularly rowdy crowd armed with flares were ready to receive a massive 21 track set – although, not before Gallagher had reminded them to stop pushing around, noting he’s “not the red cross”. Shots were also fired at Manchester City and bankers, with the latter being dedicated to a song. In his true style, he noted: “Leeds gets a bad rap but not all ugly”, and pointed to a few audience members he deemed, ‘stunners’.

Listing off classic tracks from both his solo ventures and his Oasis classics, the pyrotechnics throughout each certainly deserve an honourable mention – fireworks and flames galore, it heightened the outstanding set created by the brit-pop veteran. Crowd favourites included ‘Wall of Glass’ and ‘Why Me? Why Not.’ and the heightened atmosphere made them all the more memorable.

A would-be multi instrumentalist, throughout the gig had his maracas and even a recorder at one point. Further proving Gallagher will always write his own rules, his ‘final’ track of the night, ‘Once’ was ironic as this was a set that wasn’t going to finish once – or even twice.

In a rather sweet gesture, the end of his first encore was ‘Live Forever’, which was dedicated to the late Rolling Stones guitarist, Charlie Watts. After five tracks in his first encore, you’d be forgiven for thinking his set was over as many of the audience members did. After the lights returned, he strolled on and called the audience ‘silly billies’, before launching into his sixth and last encore, ‘Wonderwall’.

A man of few words, his lasting words of advice was to “be careful of knobends”. Words which will surely be treasured by all who witnessed his set. Also, the only issue with hearing tracks such as ‘Rock ‘n’ Roll Star’ and ‘Morning Glory’ live is that streaming will never quite cut it – we’ll just have to book tickets to his next tour, as clearly just once is never enough.