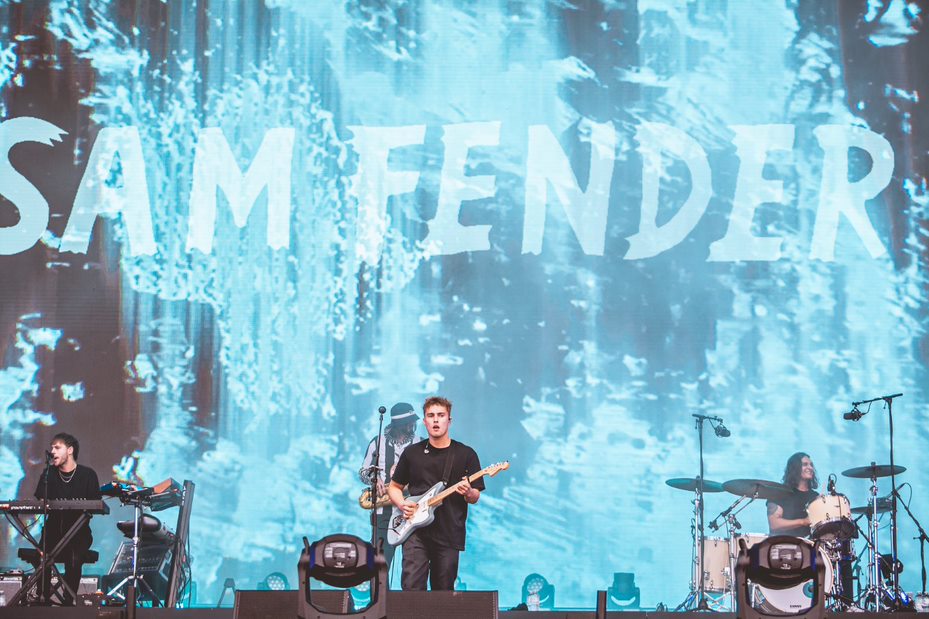 After an incredible start to the festival, a whole host of new audience members and the sun had finally arrived to continue the celebrations of live music. Taking over the helm for main stage duties was grime heavyweight Stormzy and Scottish rockers Biffy Clyro.

There must be something in the water up North, as acts such as The Snuts and Sam Fender continually wowed crowds. Each day the bar for music at the festival remained high, the only aspect declining was the toilets – naturally, better there than on stage. Also, the excitement from the audience of actually seeing live acts never wore off like yesterday’s glitter.

The ground may have been strewn with last night’s confetti, however, with the sun shining down on the audience, they were well-rested for the beginning of the weekend – heralded in by Nothing But Thieves. Despite their guitarist Dom Craik being out of action for their Reading set the day before, he was witnessed putting twice the energy into their Leeds set.

After their moving track, ‘Real Love Song’ was so well received by the crowd, frontman Conor Mason already deemed the set “better than Reading”. Their powerful track ‘I Was Just A Kid’ saw the audience feeding off their energy, their hands in the air anticipating the breakdown.

Taking a trip down memory lane, their older songs such as ‘Trip Switch’, also made it into their festival set. It became a duet between Mason and the crowd. Slower but no less impactful, their performance of ‘Particles’ at Leeds marked the first time the band had seen a mosh pit for the track – and for that, Mason awarded the crowd the gold prize.

A Covid release, ‘Is Everybody Going Crazy?’ may have been overplayed on the radio – according to Mason, however, the crowd singing along to every word kept the community spirit of a festival at the forefront. ‘Forever & Ever More’, saw Mason holding the notes perfectly, heralding a mosh pit. Their finale and latest release ‘Futureproof’, was even more impactful than on the radio – proving that the live element of a festival is truly priceless.

Keep up with Nothing But Thieves:

After drawing a large crowd brandishing their Scottish flags, from the beginning The Snuts certainly knew how to warm up a crowd. Their opening track ‘All Your Friends’, was driven by their riffs and furious drumming – obviously, accumulating into a mosh pit and audience members tossing their bucket hats to the wind.

The punk-rock track ‘Don’t Forget It (Punk)’, had all of them changing to a middle finger up and proved the band exudes confidence well beyond their years. Cochrane made it known about, “that thing where your favourite band don’t play their old stuff” and corrected it by finishing with fan favourite, ‘Seasons’.

A soft and emotive track, the band can really do both. Also, some of the members were sporting sunglasses, which concluded that they’re already certified rock stars – who are just waiting for the world to catch on.

Introduced by Katie Owen, he’d gathered quite a crowd before he’d walked on stage and everyone was screaming for his arrival. We were informed by Sam Fender himself it was a “magic day because me and Dean [Thompson] came here when I was seventeen”. Recalling memories such as how their tent set on fire and cans exploded, was a foreshadowing of their hard-hitting set.

Written about his hometown, ‘Dead Boys’ was just as atmospheric as its fast-paced predecessor, ‘Will We Talk?’. Lyrically, his music intricately tells a story and was bolstered for the live arena by Johnny ‘Bluehat’ Davis on the saxophone – who sported a Newcastle football strip on, it’s clear the band are true to their roots.

Goading the audience about ‘Spice’ having massive mosh pits at Reading, Fender also reminded them to look after each other – which linked with the festival’s important message of #lookoutforeachother.

As well as revisiting old tracks, Leeds was also a chance to try out new ones. His track ‘Get You Down’ from his new album was exceptionally well-received by the crowd. In ‘Saturday’, the crowd were invited to singalong no matter if they had a “low voice or squeaky high one like me”. Someone in the crowd was also shown to have a cardboard banner reading “my dad is your postman” – a small world indeed.

Already deemed by Fender as the “Best gig [they’ve] ever played”, ‘Hypersonic Missiles’ was the quintessential track to finish his set. Counting down to the final chorus, smoke blasted on stage, although his voice was already attention-grabbing enough. Every few decades, an ingenious artist finds their way through the cracks, by the reaction of the crowd and his obvious talent – it seems like we’ve already found ours.

What was once the Festival Republic Stage had been rebranded for Saturday as The Lock Up – the place to see the best rock and alternative artists. Yonaka’s opening track ‘Seize The Power’ immediately alerted the audience that they were in for a fiercely dramatic set. The red lights were in tandem with the beat and their powerful lyrics “​​I got power in my hands and it’s yours for the taking”.

Dressed in black mesh and leather accents, ‘Punchbag’ continued to prove that there isn’t another frontwoman like Theresa Jarvis. As she called for more movement, she was shown dancing all over the stage throughout the set. ‘Call Me A Saint’ was “for anyone who is going through a hard time at the moment” and Jarvis reminded others that they weren’t on their own. A band creating a community through their music, saw Jarvis gesturing her strength while singing, “I’m a strong bitch, baby, I’m designer”.

Their track ‘Greedy’ was going to feature a pig mask on George Edwards but it wasn’t on stage. It was kind of fitting though, as theirs was a set where any mask was left at the door and vulnerabilities were bravely worn. Encouraging others to push boundaries and doing anything unordinary, ‘Ordinary’ started soft and was quickly turned up a notch with Jarvis spinning on stage and Edwards holding his guitar in the air.

Their track ‘Clique’ saw The Fever 333 there in spirit, the perfect rock-rap track. Tapping on the mic to get the audience clapping for a build-up, ‘Teach Me To Fight’ kept the momentum going. Dedicated to the dreamers, ‘Rockstar’ was a message from Jarvis to the crowd, to never give up on your dreams and not to let go of them. Midway through the crowd were made to crouch down and jump back up again – perhaps with a new commitment to going after their goals. ‘F.W.T.B’ saw Jarvis asking if there were any bosses in and the audience answering with the biggest mosh pit of the night.

Mosh pits galore mixed in with intermittent motivational speeches and a D.I.Y banner, the audience surely left feeling fulfilled and a renewed attitude thanks to one of rock’s most necessary voices.

After Liam Gallagher’s set, the anticipation for Stormzy was high. The front section had long been established as the place to be, further proved by crowd members running to make it once the barriers were down. What continued to be an ongoing battle between the security and audience members battling to make it over the barriers to the front action, appeared to offer a bit of light entertainment before Stormzy could begin his show. As soon as the words, “They want a show? Then we’ll get them a f***ing show – Stormzy 2021”, flashed on the screen, the audience was in the palm of his hand.

High-powered guitars, flames, and fireworks were more than enough to assert the crowd’s thoughts that he’s one of the best performers of our generation. The first track, ‘Big Michael’ saw Stormzy singing on a platform in the centre of the stage, the altered words, “Can’t tell where I’m headin’ (No), Could be Leeds, could be Reading”, rang all too true. His talented backing dancers deserve a mention of their own as alongside the crowd gave their all for ‘Know Me From’. We were at his party and our wristbands were our exclusive invitation.

His track ‘First Things First’ was even more dramatic live and didn’t need fireworks or any pyrotechnics to heighten the gripping atmosphere. After revealing he’s been planning this since last year, he also noted he’d brought his family on stage with him.

Keeping it in the family, his track, ‘Rachael’s Little Brother’ was all the more special – announcing that she’s the reason he’s who he is today. ‘Take Me Back To London’ may have gone ahead without Ed, however, with the audience shouting the words back, it was a clear success. Despite losing his voice a bit the day before, the audience was quick to step in for ‘Crown’. A moving and powerful track, it featured beautiful backing singers.

‘Rainfall’ and ‘Blinded by Your Grace, Pt. 2’ were ethereal with the latter topped off with fireworks. United by the lyrics and free to sing to each other’s own beliefs, we were reminded of the unique power of faith itself. Taking a more unholy turn, the crowd was also heard chanting for the star of the show to take his trousers off.

Special guests Jack Grealish and Chunks only added to the surreal feeling of his show. It’s strange to think that four years ago, he was on the Radio 1 Xtra stage – how times change. Reminding the audience he hadn’t been on a stage like Leeds since February 2020, it had been a long time coming. Before the end of his set, he entered the audience and spent the track trying various hats and sunglasses on.

Finishing with ‘Vossi Bop’ twice, he altered the lyrics to “This is Leeds city, we the hottest in the world” – a fitting tribute to his perfectly executed finale. An artist who has remained humble, it was truly rewarding to witness – besides the flattery didn’t hurt.