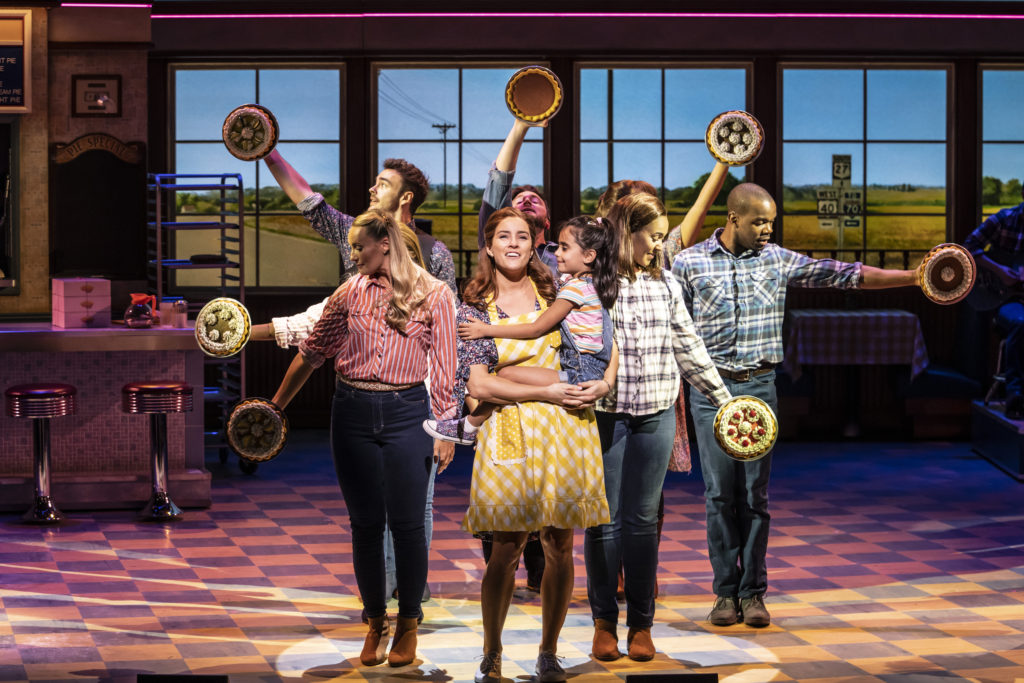 When the news hit that Waitress: The Musical was coming to Manchester on their UK 2021 tour, I was instantly intrigued. The show’s delectable reputation precedes itself, and this feel-good musical with an important message is exactly what we need to reignite the theatre scene once again after pandemic induced closures.

With music and lyrics by Grammy award-winner Sara Bareilles, and a book penned by acclaimed writer and director Jessie Nelson, the performance was a sweet confection with all the right ingredients to make the perfect night out. However, I couldn’t help but feel that a few acting and directing choices interfered with what could have been some truly impactful moments, leaving a slightly bitter flavour.

The story revolves around Jenna Hunterson (Lucie Jones), a kind and talented pie maker and waitress, hence the title, trapped under the abusive hand of her husband, Earl (Tamlyn Henderson). When she discovers she’s pregnant with a baby by “a man who can’t love”, her personal journey of self-love and independence is whipped up, beginning a bittersweet romance with her gynaecologist, Dr Pomatter. She is helped and empowered by her two best friends/co-workers, Dawn (Evelyn Hoskins) and Becky (Sandra Marvin), who are also dealing with issues within their own lives. Waitress is a heartfelt yet hard-hitting tale about female strength, hope, and how everyone deserves a slice of “the pursuit of happiness” pie.

Lucie Jones, of The X Factor and West End fame, did a standout job as the lead, capturing the vulnerability and compassion of the character; building a stronger performance as the show progressed. Her complex voice was both charming and captivating, almost getting a standing ovation for her rendition of the show’s 11 o’clock number, ‘She Used to Be Mine.’

Love interest and pie-lover, Dr Pomatter, would normally be played by Busted star Matt Willis but for this performance, Nathanael Landskroner donned the lab coat of the endearing OB-GYN. Landskroner never felt foreign to the role, conveying effortless chemistry with Jones and an ability to inject his own humour and seasoning into his performance.

My biggest issue with the musical was timing as everything felt slightly rushed – underbaked if you will. There were scenes when jokes didn’t quite land and genuine emotion wasn’t as impactful as it could have been because these moments happened too quickly; which therefore disconnected the story from the audience. So, when there were times of stillness, it felt stagnant; as if everything was out of place and we just stopped suddenly.

Act One was a big perpetrator as it didn’t give itself the time to build and establish relationships to the best of its ability. A very poignant scene between Jenna and her husband Earl was lost on the audience and didn’t convey how important that moment is to the narrative, and to the dynamic of the couple. I wish we spent more time focusing on the nuance within the characters and the script. Having said this, Act Two is where the show really got comfortable and slowed down, and was a true taste of the incredible cast and crew’s talent, and a showcase of just ‘What Baking Can Do’.

Because of the serious themes, a show like Waitress needs charismatic and comical supporting characters to add a bit of sugar, and Hoskins’ portrayal of Dawn alongside George Crawford’s Ogie did just this. Each of their individual solos had the audience in stitches, and their goofy but genuine on-stage relationship was always a shining light in the narrative. Crawford’s physical comedy in ‘Never Ever Getting Rid of Me’ was full of zest, playing Ogie like no other Ogie before him.

A special shoutout to Sandra Marvin as Becky, whose powerhouse vocals were paired to perfection with her sprinkles of wisdom. Her song ‘I Didn’t Plan It’ was as impressive as it was evoking, leaving a lasting impression and goosebumps on the skin.

The friendship between the three principal women is joyous and a key factor in why the show is so rewarded and relatable to a variety of audiences. In an interview with aAh!, Crawford described ‘A Soft Place to Land’, the only song featuring just Jenna, Becky and Dawn, as his favourite moment in the show and it’s clear why. It was ethereal and imaginative, a slight dusting of flour and magic.

All the songs in Waitress are crafted beautifully. Sara Bareilles can seemingly do no wrong. They were not only performed incredibly by the featured players, but also by the ensemble cast. There’s a lot of food-ography (you’ll understand when you see it) and drawn-out emotional movement, and though that style is not my favourite, it added a warming whimsicality to the show.

The audience was transported to this pie-centric diner in dead-end America with classic sets and scenery that transitioned seamlessly from place to place as we followed Jenna. A nice touch was having the band performing, and even acting, on stage whenever we were in the ‘Diner’; a rare spotlight on the orchestra in musicals.

Waitress: The Musical is a fresh, radiant show with a very crucial message. Hoskins ended the night by reminding us that Jenna’s story is a reality for some, and 1 in 3 women will experience a form of domestic violence in their lifetime. In support of Refuge, a charity in aid of abuse survivors, the tour is raising money by challenging everyone in the cast to do 2000 squats each.

More shows like Waitress need to be showcased, and though not perfect, it was entertaining and special. I can assure you that seeing the UK 2021 tour will not be a “Bad Idea”.

Waitress: The Musical will be cooking up shows in the Opera House Manchester until Saturday 20th November before touring around the country till August 2022.

More information about dates and locations can be found at waitressthemusical.co.uk.