You are here: Home / Culture / Music / “Expect a wee bit of madness”: Parliamo’s Jack Dailly on the madness of tour, hip hop influences and his manifesto policies 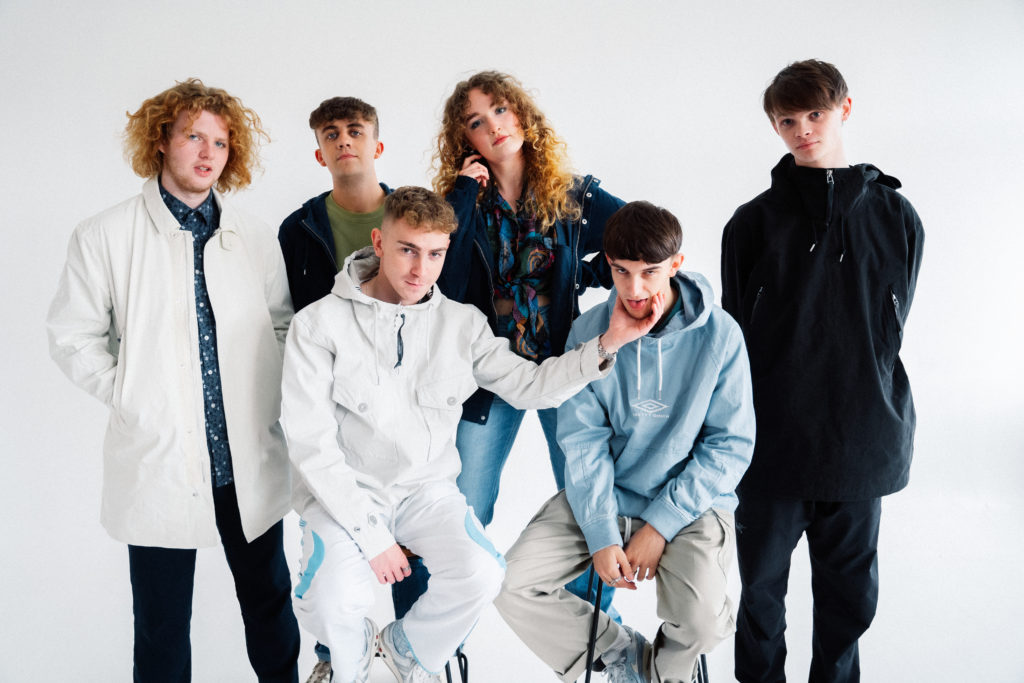 If you’ve not got to know Parliamo in the underground scene yet, then it is time to get to know. The alternative six-piece are putting Perth on the musical map with their highly appraised tongue-in-cheek approach to songwriting and hold an esteemed live reputation.

The band released their short but certainly sweet EP ‘The Parliamo Manifesto’ earlier this month thanks to the label Modern Sky (The Coral, The Blinders, SPINN). Each track identifies with the quintessential hardships that young people face such as mental health, religious pressures, love and desire. However, any sense of gloom from the subject matter is trumped by the optimism and vibrancy of their music.

Frontman Jack Dailly speaks to aAh! Magazine all about the tour, EP, how hip hop revolutionised their sound and his own policy manifesto.

What’s the origin story of Parliamo?

“It started with me and Finn [Freeburn Morrison], the lead guitarist. We’ve been writing songs since we were like 14 or 15-years-old then we had a lineup of just five of us for a while. Then last year during lockdown we had a wee change up off the sound and got Mari [Sutherland] the backing vocalist. We’ve been releasing tunes since 2018, but since we became a six-piece that was the start for us of what we wanted to do and where we’re going with our music.”

That’s interesting how you evolved over lockdown, how did that occur?

“Last summer in June I think was when we finally got to mix with other people again. We met up in Finn’s garage and started to write the new tunes. It was a conscious effort to start writing different stuff than before, it just kinda happened. In the end, it worked and we said let’s go for it. Maybe it was having the time away and we were all listening to different stuff at the time. But it worked.”

Did lockdown have any effect on your art?

“We had a wee bit of time [away] from it but we did change. We all feel like we aged about ten years physically and mentally. It was a weird time but we came back with a fresh perspective. It saddens me to hear other bands didn’t have the appetite for it anymore during and after lockdown. But luckily [for us] it renewed it and brought our hunger for it again.”

What music influenced this change in the band’s dynamic?

“The older stuff was just indie alternative, a wee bit more straight up like that. The whole band are well into our hip hop and R&B. We wanted to involve a wee bit of the genre into our music and started using sampling. We started watching The Get Down, it’s a dramatisation of the origins of hip hop and it’s brilliant. The process of how they did things inspired us to head towards more hip hop drums and feel.”

Can you explain the unique songwriting approach you’re so highly appraised for by critics?

“I think lyrically we try to be as honest as possible. And writing in the Scotsman vernacular which is just how we and our pals would speak to each other brings authenticity to what we are trying to discuss in our music. I think using any other kind of voice that wasn’t my own would be disingenuous. So the vernacular in Scotland, I suppose a phenomenon in it where we like to approach things where we know things are kinda a bit shit but you’ve got to have a laugh about it. You got to laugh or you’ll cry.

“Normally we start with the music. Me and Finn live together so we just jam away and I’ll write the lyrics as we go along. Sometimes we’ll pick a subject matter and let it roll from that. But we don’t take long writing a song, which I think is pretty good. Me and Finn will sit and write tunes all the time.”

What’s your favourite song from The Parliamo Manifesto?

“I like ‘Catholic Guilt’ because I think lyrically it is probably the best one. Either that or ‘Who Needs A Reason?’. I like the lyrics on both of those because they’re honest and I’m happy with them. Also, we’ve been sitting on the album for almost a year now so those tunes we had heard and some of our pals so I guess that gave us a bit of a connection to them. So yeah, probably ‘Catholic Guilt.'”

How’s the tour been so far?

“Amazing. The gigging is the best part. It’s been great to see people react and enjoy the new stuff so we for sure know it works because the live context has shown people respond well to it. The two Scottish shows, Dundee and Glasgow, were crazy. The Glasgow show was one of the best moments of my life.”

What should people expect from a Parliamo gig?

“A wee bit of madness. Just high energy from us and the crowd. We’ll just be up there having a good time so yeah, expect a wee bit of madness. We’re very excited for the Manchester gig. I love Manchester as a place. We went a couple of years ago to see the B-52’s. We also did a gig at the start of last year in Salford. I believe it was called The Eagle Inn, it’s a really cool venue.”

If you ran to be leader of the country what would be in your manifesto?

“Reduce tax on alcohol. That would be number one. The Scottish Government brought in this minimum alcohol pricing. You know Frosty Jacks? Absolute rocket fuel. And we used to get three litres bottles of it for £2, it was absolutely wild and we used to drink that. But since they bumped up prices a bottle of that can be like £8. So tackle taxation on booze!”

Parliamo will play at The Castle Hotel on Tuesday 30th November, 2021. The Parliamo Manifesto is out now and available to stream on Spotify and iTunes.