You are here: Home / Culture / Interview / Manchester / Waitress: The Musical’s George Crawford: “The feedback from audiences has been really touching” 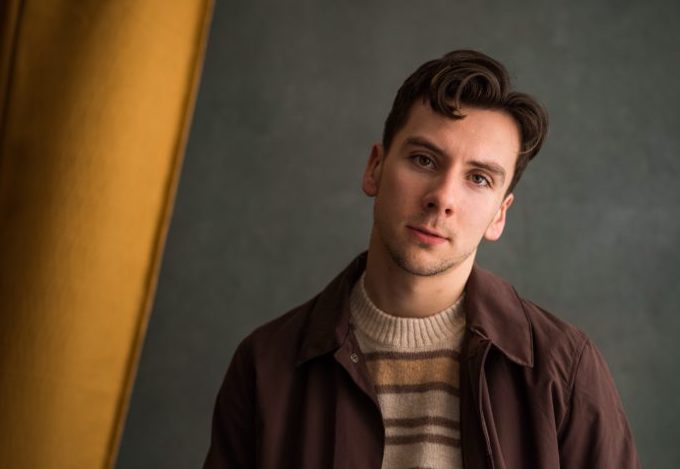 The UK 2021 tour of Waitress: The Musical has commenced and is on its way to Manchester. Presented by Barry & Fran Weissler and David Ian, and featuring music and lyrics by Grammy Award-winning Sara Bareilles, Waitress became a hit when it opened on Broadway in 2016, before moving to London in 2019.

Based on the 2007 Adrienne Shelly film of the same title, the show follows the story of Jenna, a waitress and keen pie-maker who leads a dissatisfying life in a small town. When a local baking contest presents a chance for her to escape her daily troubles, Jenna embarks on a challenging personal journey to reshape her life. Waitress is a musical about hope, celebrating friendship and motherhood.

The UK tour stars Lucie Jones as ‘Jenna’ and Busted’s Matt Willis as ‘Dr Pomatter’, alongside Sandra Marvin as ‘Becky’ and Evelyn Hoskins as ‘Dawn’. Starring as the goofy and lovable ‘Ogie’ is George Crawford.

During the pandemic, Crawford performed in four-man musical Forever Plaid in Highgate before joining the cast of Waitress this year. Crawford trained at ArtsEd, receiving a BA (Hons) degree in musical theatre before joining the original international tour of The Book of Mormon as an ensemble member and cover for Elder Price and Elder Cunningham.

aAh! Magazine speaks to Crawford about his return to the stage, pre-show rituals and his favourite moments of the show.

What has it been like being able to get back into theatres and perform again after the pandemic?

I feel very fortunate to be performing again. Theatre is a really great way for people to escape from the mundane world, and the fact that I can bring a smile to an audience member’s face or make them laugh and forget about everything else for an evening is a very humbling feeling.

What is your favourite part of the show?

The number called ‘A Soft Place to Land’. The three female leads sing it together and it sounds beautiful. Another moment I love is the finale when we come to the front of the stage and see the audience’s faces and sing to them. It’s amazing to see how many people are singing along or crying their eyes out.

What is your favourite thing about your character?

My favourite thing about my character is being the comic relief for the audience. The musical covers some very important and very current themes that can be uncomfortable to both watch and address, so it’s great when I come on and allow the audience to catch their breath and encourage them to laugh.

How do you get into character before a show? Do you have any pre-show rituals?

I don’t have much of a pre-show routine. Christopher [Hunt] who plays ‘Cal’ has to do quite a lot to get into his ‘baddie’ character. I brush my teeth and have a throat sweet and that’s about it!

There are some big names in the cast, such as Lucie Jones and Matt Willis – what is it like performing alongside your fellow cast members?

They are incredible. They’re such normal people with no ego attached to the fame that they have. I feel so lucky to be working with them and Lucie leads the company with such kindness.

What has been the best moment of the tour so far?

The best moment has to be my first performance. I had my best friends in the audience and luckily it was so well received! The feedback from audiences has been really touching.

What does your day-to-day routine look like while you’re on tour?

Because my role is quite energetic and physical, I have been training more in the gym to keep my stamina up. But when we move from venue to venue, I try to turn into a tourist at each new destination so that I find something to remember each city by.

What advice would you give to aspiring performers wanting to pursue a career in theatre?

Keep working hard and trust the process. You’ll have knockbacks, but it’s the strength it takes to get up again which will make you stand out from the crowd.

What is your dream role and why?

I don’t really have a dream role, but I would say that my dream shows are West Side Story and Newsies. Really my dream is to be involved in creating a new piece of theatre, and so I have dream venues where I’d love to do this – The Royal National Theatre and Regent’s Park Open Air Theatre, both in London.

Waitress: The Musical will be at the Manchester Opera House, 8-20 November 2021. For tickets and more information click here. Follow George Crawford @georgeygriff.

Helena Heaton graduated from Trinity College, Cambridge with a degree in History of Art. Currently, she is completing an MA in Publishing at MMU. Her interests are art, theatre, and books.