You are here: Home / Culture / News / Holly Humberstone @ YES review – breathtaking lyricism and a glorious welcome back to intimate gigs 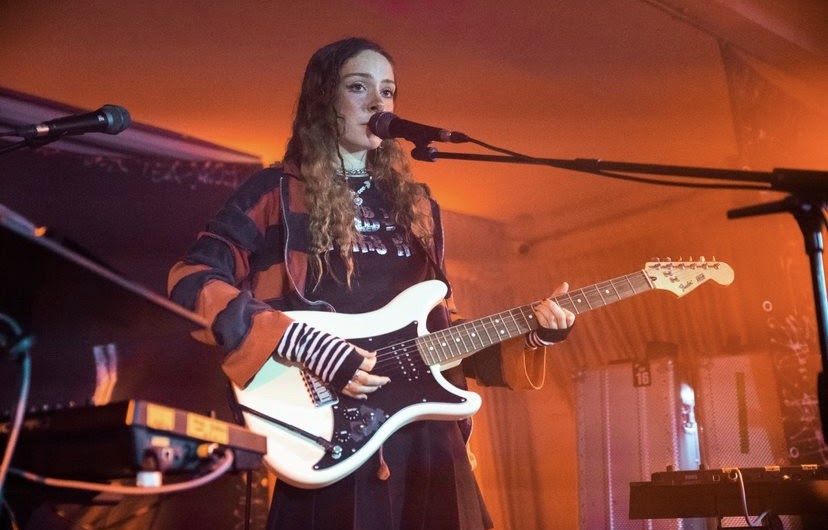 With her effortless discography and the ability to commandeer a crowd of excited fans, it’s clear from Holly Humberstone’s The Pink Room set at YES that she is a star in the making. The 21-year-old singer/songwriter from Grantham, Lincolnshire and BBC Sound of the Year 2021 runner-up, has influences from the likes of HAIM, Phoebe Bridgers and Ben Howard.

Having released her debut single right at the start of the pandemic, it was refreshing to see so many people packed into the iconic venue for a set that certainly didn’t disappoint! Featuring gorgeous production by none other than front-man of the 1975, Matty Healy, and highlights of ‘Please Don’t Leave Just Yet’, Humberstone’s breathtaking lyricism made for the perfect atmosphere.

With support coming from Scotland’s very own Dylan Fraser, it was clear right from the offset that the audience were in for an excellent evening of real and raw live music. His six song set included a spectacular cover of Radiohead’s ‘All I Need,’ before closing with the track ‘Nightmares’ from his latest EP The World Isn’t Big When You Know How It Works.

From the multiple drum machines, sample pads, keyboard and looping machines set up on stage, there was a certain expectation that Humberstone would emerge with a band of some sort – that was until she came on to the stage by herself, which made this very special show quite the bit more impressive.

Her opening song initially seemed like an acoustic version of ‘Vanilla’ until the drum pads kicked in halfway through. The crowd screamed back every word. It’s hard to master the talent of sounding exactly the same in real life as you do on recordings but Humberstone has that down to a T. It’s hard to critique her performance in any way.

Laughing with the crowd, Humberstone claimed she’s an awkward person. But it was hard to tell as her energy and enthusiasm rippled through the audience. They were treated to not one but two unreleased tracks from her latest EP The Walls Are Way Too Thin at different points in the show.

She then played ‘Drop Dead’, followed by ‘Haunted House’, an emotionally intelligent ballad in which she looks back on memories of her childhood home, which had the crowd swaying in unison. The piano in this track sounds as if it was nipped right out of Billie Eilish’s hands and it actually adds a bit more emotional depth to the lyrics – not that they really need them, of course.

One of the last tracks before the encore and one of the definite highlights of her set, ‘Scarlett’ was the perfect song to have so close to the end of her set as the whole crowd sang at the top of their lungs. Plus her best friend Scarlett, who the song is written about was at the gig so it was an extra special performance.

‘Falling Asleep at the Wheel’ and the title track from her debut EP The Walls Are Way Too Thin (played as an encore of sorts) were the last songs in Humberstone’s set. It was hard to believe that the show was already over as it had been so captivating that time had just run away. That particular duo of songs was the perfect end to an absolutely incredible evening.

Holly Humberstone’s debut EP The Walls Are Way Too Thin will be released on Friday 5th November by Interscope Records.