You are here: Home / Culture / Manchester / News / “People were being trampled on”: Manchester fans relive moment they were caught up in Travis Scott Astroworld tragedy 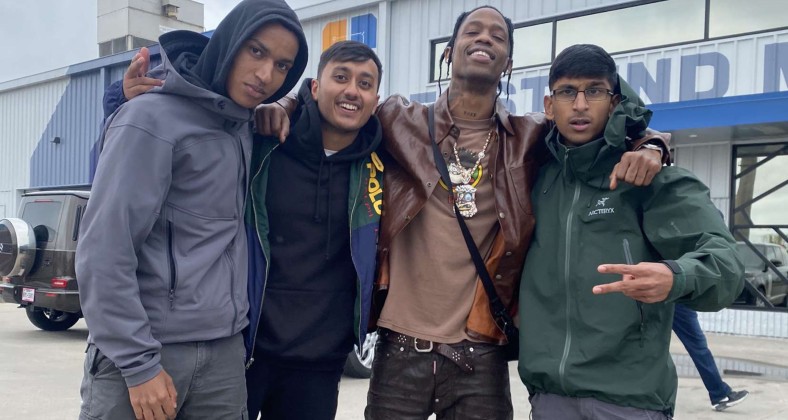 “I honestly believe someone was watching us that night because it was so easy for the three of us not to come back.“

Three music fans have described the terrifying moment they were caught up in the “deadly” crowd surge at Travis Scott’s Astroworld festival in Houston.

Ten people died as a result of the event hosted by the US rapper in his hometown.

Multiple people were injured through a crowd surge. At least 50,000 gathered at the Texas event according to Houston Officials website.

Noah Hyams-Ssekasi, 20, and Kian Patel, 21, both from Bolton and Rayyan Nehal, 21, of Manchester, attended the event and witnessed the horrifying scenes of “people being trampled on”.

Noah said: “I saw 50-plus bodies getting carried over me left, right and centre.

“I had to stand on my tip toes and push my head up into the air just to try and get some cold air.

“I’m not even religious but I honestly believe someone was watching over us that night because it was so easy for the three of us not to come back.”

The concert was stopped for a while as Travis Scott tried to spot people out of the crowd and direct medical attention towards them.

Viral video footage shows fans climbing onto camera platforms asking a TV crew to help people while others climb and jump up and down on ambulances.

Noah described scenes of “high intensity” from the morning of the concert.

He said: “When the doors opened, I don’t know how it happened, but they just broke down the fence and everyone started running. There were three security guards and they didn’t stop anything. They were definitely shortstaffed.”

The Greater Manchester fans met the Houston rapper while he was doing a series of charity events and the musican took the time to speak with them, take photos and sign merchandise.

“I cannot lie, he made us feel on top of the world like he isn’t a joke to us we love him. The feeling that guy gave us,” said Noah.

During the festival Noah was worried he might be injured as a result of an elbow to the face and later on during the concert the friends were separated for over an hour.

Forty-five minutes before Scott’s set, Noah described “not being able to move his arms” and witnessing people “passing out and being passed over the crowd”.

He also saw small-framed women and children trying to escape the crowds and getting pushed around.

“There was nothing you could do but go with the motion. You’re not getting back up unless someone helps you. You can’t even see your feet so it’s hard to see anyone who’s down on the ground,” he said.

When the rapper made his entrance the crowd was described as ‘rushing forward’.

He said: “If you’re in the middle, you’re getting crushed and struggling to breathe.”

“I saw some guy’s head bleeding. One girl went down and when she got up her nose was destroyed. I’m pretty sure I saw someone dead, he was just pale, pure pale white.”

Noah says the three of them felt very lucky not to be seriously injured or worse.

The youngest tragedy was a nine-year-old Dallas Boy.

Noah said: “The more I talk about it the more you realise how you actually lived through a really traumatic experience, so we chose to go and leave some flowers at a self organised memorial.

“It’s just crazy. One 14-year-old kid went to see his favourite artist and didn’t come back.”

The three music fans give thier condolences to all those who were injured and sadly didn’t make it. They want to encourage everyone to donate to the organisations decidated to helping the victim’s families and everyone that was affected.

This article was first published on The Northern Quota. For more news from Manchester follow @northernquota