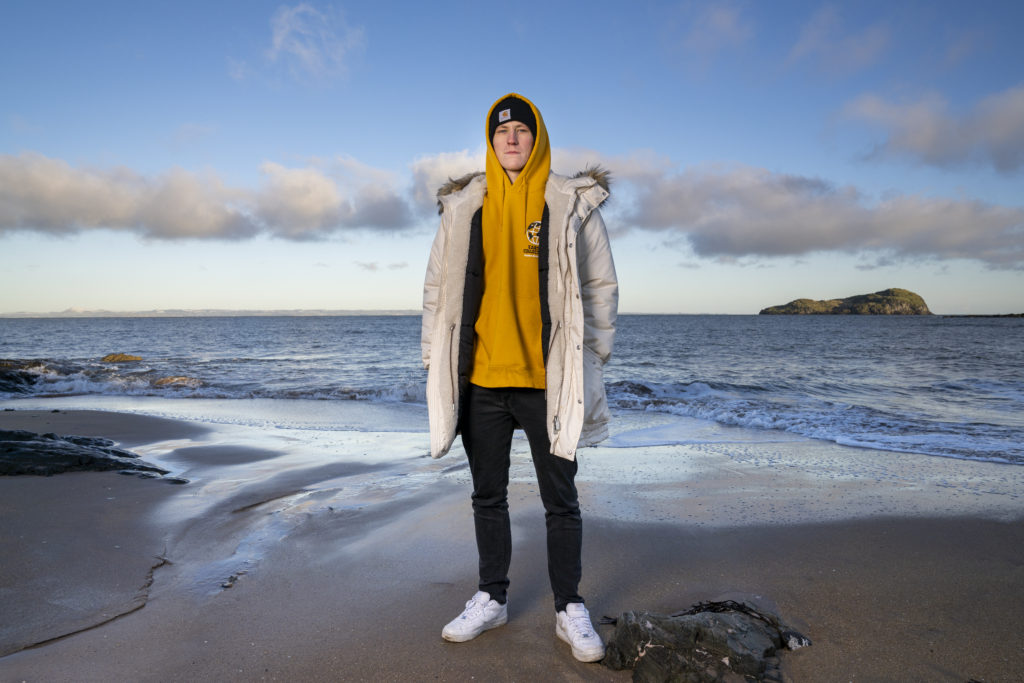 After over a year and a half of uncertainty, a performance by one of the most uplifting artists to come out of this period of adversity was needed. Born out of the pandemic by riding on the wave of the Sea Shanty craze on TikTok, seeing the postman-turned-chart-topping artist Nathan Evans at the beginning of his European tour was almost like coming full circle. Set at the Deaf Institute, a venue that was nearly lost this year due to the financial hardships of the pandemic, it was sure to be a triumphant evening for the venue and Evans alike.

Before we could finally witness Evans in the flesh, we were treated to a performance by Jazz Morley. A disco ball hung from the ceiling, causing dancing lights to dart around the room while Morley’s all-encompassing, evocative voice and beautiful attire were certainly reminiscent of old Hollywood glamour.

Closing her eyes while hitting all the right notes, her track ’Lights’ was particularly emotional. Written before she nearly got killed by a lorry, the words “Saw the light at the end of the tunnel” were heard soaring to the heavens. Accompanied on the keyboard by Daniel Bingham, there’s a special bond between two musicians who can become lost in their music together.

Offering a cover by one of her favourite artists, Joni Mitchell’s ‘A Case of You’, it only served to prove the sheer control Morley has over her vocals. Beautifully done, the cover was a clear tribute to one of the most heart-rendering artists of our time. Morley’s recent release, ‘Only You’ was another soul-stirring track. Rivalling the melodramatic prowess of Adele, the keys were pared back at the end so her voice could hold you until the final note.

Despite the deep nature of her tracks, in between songs Morley kept the mood light by informing the audience, she was selling CDs – but if you didn’t enjoy her set to “buy three and give them to people you don’t like”.

Her final song ‘Disconnected’, was written 11 years ago when her brother went to Afghanistan. It was a slow and melodic finale and while playing the piano too, we were reminded of the true power of a soulful voice, sentimental lyrics, and a bewitching melody. Sometimes simplicity really is key.

Another artist who isn’t too unfamiliar with blowing up on TikTok, Caity Baser’s relatable lyrics and enigmatic stage presence is certainly sure to draw you in. Accompanied by Arianna Reddi on guitar, their opening track ‘Average Student’ perfectly summed up university life – yearning for a holiday while unable to afford a takeaway.

‘Haters’ saw Baser tackling the issue of those who hate what you wear and how she rises above it. The only sad song of the set was an ode to someone she loved virtually as they lived in Australia. It conveyed her emotional range as she sang, “If it’s not meant to be how come I see you in my sleep”.

Dialling up the tempo with her catchy post-break-up anthem ‘STD’, Baser left the audience in stitches as she imagined her cheating boyfriend catching something as karma for his sordid actions. Belting out the notes of ‘The Ick’, she expertly crafted tongue-in-cheek lyrics that were once again met with chuckles from the audience. Known to some as ‘Lil CB’, she prepared the audience as she was “about to spit bars” on ‘Lil CB’. A rap-pop autobiography, she included the crowd by encouraging them to shout, “Caity Caity rock on”, as she bounded about the stage.

Mixing talking with singing, ‘Say It Like That’ was centred around a break-up that ended on good terms but Baser later discovered they were talking about her behind her back. The words, “I heard you’re saying that you broke my heart / I wanna break all the windows in your car”, were particularly memorable. You may have heard of Jennifer Lopez’s ‘Jenny From The Block’, however, Baser presented her own take, ‘Caity From The Docks’. With the crowd clapping along to the beat and a slick guitar, her lyrics “On my way up to the top”, assured her of her certain ascent to fame.

It wasn’t long before it was time for the man himself to make an entrance. The audience was a hive of anticipation as Nathan Evans prepared to make his appearance from the virtual world to the real one. Strumming an acoustic guitar while launching into ‘Told You So’ and greeting the crowd with a cheeky grin, a girl next to me in the audience made her adoration for the Scot known, as she jumped up and down with a beaming smile. Written about embracing the craziness of his journey so far, it was the quintessential opening, as it reminded us just how far he has come already.

Offering a taste of his debut album that is currently in the works, his original unreleased tracks were a perfect indication of what he has planned for the future. His second track was led by an upbeat melody and the crowd clapping away. Already a master of showmanship, Evans showed off his own white tour hoodie to the crowd, who he informed could purchase one from his wife Holly Evans, who was selling the merchandise. Their solid partnership was clear to see. His song ‘Perfect Storm’ was wonderfully charming. Dedicated to his relationship it was purposefully personal with him singing, “I tried to catch your eye across the classroom” – a thoughtful reference to his childhood sweetheart-turned-wife.

Swapping his guitar for a keyboard, he joked about just playing one note and how the instrument was only there for show. If anyone had doubts about his talent, they were surely dismissed after another spell-binding, original song. Staying on the keyboard, his next song was ‘The River’ which was based on his life over the last 12 months and how his wife has gone with the flow.

‘Catch You When You Fall’ was performed without instruments. A “wee Scottish song” also crept into his set in the form of ‘Wild Mountain Thyme’. The crowd gave it their all and was praised by Evans who said, “That was beautiful”.

Keeping the folk theme going, his next song was the infamous ‘Wellerman’, his “favourite song ever”. Due to the audience’s wild reaction, he had to restart it twice but it was more than worth it. His recent re-write of Scottish folk song ‘Ring Ding’, had two women doing a form of square dance together, while the rest of the crowd were left tapping their toes to the relentlessly catchy beat.

Throughout the set, he used his guitar to create a beat with the loop pedal. A member of the audience took this opportunity to sing ‘Wellerman’ and the rest of the audience joined in. While mildly entertaining, it has shown there will be some resistance to his new identity from ‘Sea Shanty aficionado’ to ‘serious songwriter’.

The other covers Evans performed were exceptionally done. Reminiscing of his first time in the studio where he covered one of his favourite tracks, ‘All I Want’ by Kodaline, he shared the live version with us. Diving into a New Year classic early, we also heard ‘Auld Lang Syne’, which had the crowd duetting with Evans and proved the man in the corner wrong, who apparently warned Evans not to perform it in England. ‘Auld Lang Syne’ also features on his recent EP release, Merry Christmas Everyone, which has arrived with plenty of time to spread festive cheer.

It can’t be stressed enough though, that Evans is so much more than a cover artist. After drawing many comparisons to Ed Sheeran, the two artists now have something else in common. Evans always wanted a wedding song like Sheeran’s ‘Thinking Out Loud’, and so he wrote this unreleased song in the studio. Serenading us with this soulful number, it would certainly be fit for a wedding, with two audience members already confirming that it’ll be their song of choice at their wedding next year.

His last song on the keyboard was based on the premise of ‘Barbed Wire and Butterflies’ and how you love to hate your surroundings. His ability to convey such emotion within a track is unmatched, it was difficult to believe this was his first proper tour. His favourite of the set, ‘Driving to Nowhere’ was a pop song driven by soul. Built on the premise of freedom and an explosive chorus, it’s certainly one to watch out for.

Leaving his ‘Wellerman’ (220 KID x Billen Ted TikTok Remix) until last, he matched the audience’s energy by jumping up and down on stage, finally giving his audience the club night he had envisioned. His last track may have reminded us of where he began but that doesn’t mean that’s where he should be boxed in.

In the same way stars such as Justin Bieber and Shawn Mendes broke into the industry by starting on YouTube, it doesn’t mean covering other people’s work is where his talents end. He more than proved his mettle tonight and the resilience shown will serve him well in his next steps. His original tracks are already arena-ready and we look forward to hearing more from him – as he continues to tell his story with his own words, welcoming a new era beyond the sea shanty insanity.

Nathan Evans’ Christmas EP Merry Christmas Everyone is available to stream on Spotify.