You are here: Home / Creative / Creative Submission: ‘The Essence of Touch’ by Hannah Sutherland 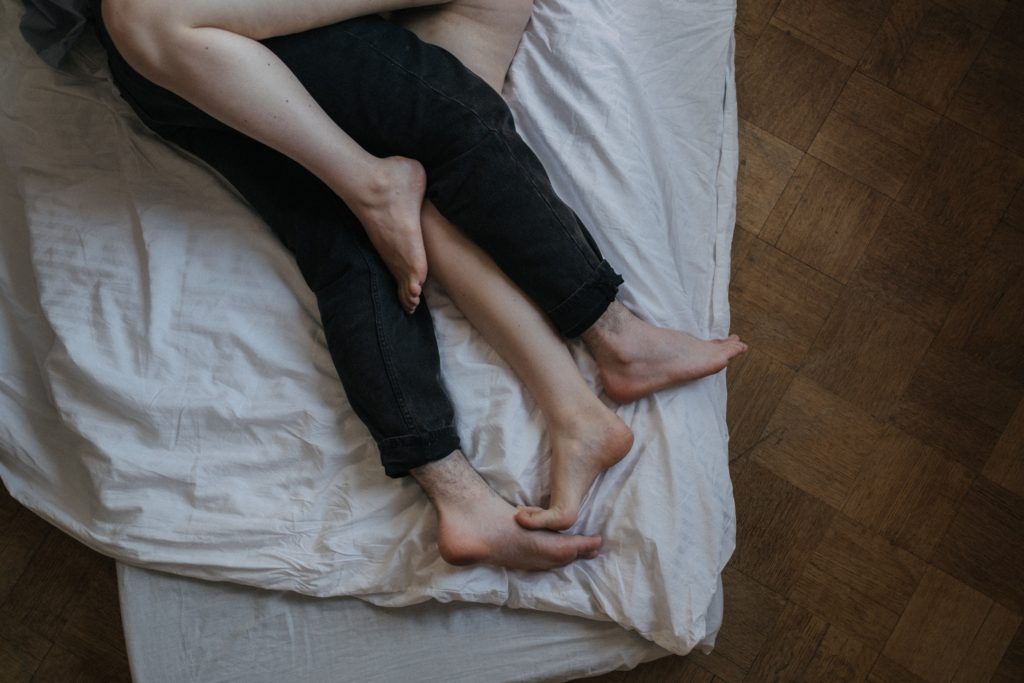 When they finish, she rolls to one side with her back facing him, and purrs lightly. He lies with one hand on his belly, the other outstretched above his head. He peers up towards the ceiling of her bedroom where some of the plaster has cracked in the corner: wonders if she knows and if she does, what she’ll do about it. He’d like to know.

He coughs slightly to rouse her but finds she’s sound asleep. He isn’t sure what the protocol is and so he remains. Somewhere outside, he can hear muffled voices and shuffling footsteps along the concrete. Eli lies very still until the noise passes and he exhales once,  the only sound filling the pale, blue dark of her bedroom is her shallow breathing. Her duvet smells familiar, of honey or vanilla, something soothing from his childhood perhaps. He pulls it to his nose and lets it rest there for a moment, inhaling it greedily.

Eli’s never known time like it. Unable to sleep yet unable to leave. Just time to think and doze and wait. He notices everything has its place. He wonders if she’s tidied especially for him, or if this is how she lives. Orderly and organised. His discarded clothes look out of place, spoiling.

He picks up the condom from the floor, discards it in the bin in the en suite, and turns on the tap. He fills the sink. He notices three bottles lining the sink and he picks each of them up, one by one, and examines them. Lathers the sweet-smelling strawberry lotion over his palms and rubs them together, then takes the lid off the one labelled Vanilla and loses himself in its comforting scent until he forgets who he is.

Who is he tonight?

Sometimes he pretends to be someone different to escape himself. Someone carefree and happy, who exudes confidence and appeal. Or someone intelligent and charming, but tonight he can’t even pretend. He’s just tired and plain and ordinary.

He puts the bottles back in their place and splashes lukewarm water from the tap onto his face then uses her luxuriously soft towel to pat himself dry. Inhales. A hint of witch hazel lingers.

When he comes back to the bedroom, she’s awake. She rubs her eyes and gives him a concentrated expression, thin eyebrows raised.

‘It’s fine,’ she says. She looks down at his cock, blushes and looks away.

‘Sorry.’ He uses his hands in a failed attempt to cover his modesty as though they don’t know each other this way.

He pulls on his boxers and t-shirt over his long, thin limbs and folds his arms across his chest. Studies the ground like it’s interesting.

‘Have you done this before then?’ she asks him. ‘You can sit down, you know.’

He sits on the armchair with a blanket, drapes the tartan around his shoulders and takes in the familiar vanilla. He thinks it’s unusual for there to be an armchair in her bedroom – thinks it’s quite lavish. Thinks her bedroom is larger than his entire flat which will be cold and quiet and lonely. He doesn’t want to return home yet, he wants to stay here in this cosy comfort for a little longer.

She nods too. ‘Yes. But usually, they leave. It’s unusual…’

He winces, realising his earlier blunder. He knew he should have left. ‘Oh, I can go now. I’m sorry…’

‘No, don’t be. Don’t go yet. It’s not unpleasant. Just unusual.’ She pauses then says, ‘What do you do then, for a job? I mean, unless this is just what you do.’

‘Oh, I just do a little bit of anything and everything,’ he says. ‘Jack of all trades, master of none, you know.’

‘What was your name again?’ she asks him. ‘You did say earlier, but I’ve forgotten.’

He clears his throat, coughs a little. He can’t seem to shift that cough. ‘It’s Eli.’

‘I knew an Eli once,’ she tells him. ‘You remind me of him actually. I think that’s why…’

She pauses and he doesn’t know what to say, so he just says: ‘Cool.’

They sit in silence, and he wonders what happened to this other Eli, the one from her past. What qualities of his remind her of him?  His appearance or his gestures? The way he walks or talks, or is it his face which holds some resemblance?

He doesn’t ask any of this, of course. Eli doesn’t say much in general. He goes weeks without talking to another soul sometimes. Attends lectures in solitude, leaves empty seats between himself and the other students. He isn’t sure how to maintain friendships and so he doesn’t try anymore.

He can’t help but pull her blanket around him tighter. Closes his eyes and takes a deep breath in. It smells so good he thinks he may cry. She seems to notice.

She stands up and walks to the bathroom. Comes back holding the bottle he held to his nose a few moments earlier.

‘Come and sit with me,’ she says, patting her bed.

Eli takes slow, steady steps and sits next to her.

He nods, although he isn’t quite sure what he’s agreeing to. She tips the bottle upside down, squeezes, and a small dollop of cream lands in the palm of her hands. She rubs them together as the cream dissolves from the friction and becomes oil-like. He sits, watching in fascination as the smell of vanilla overwhelms him. He presents his forearm to her as though he now understands and swallows as she massages. The creamy ointment melts onto his arm. He closes his eyes, unable to look at her in this moment of complete intimacy as she kneads and soothes and delights.

‘Can I?’ she asks him again, touching his other arm. He shivers with her touch.

‘Yes please,’ he says, timidly, as though the act they performed only hours ago was completed by two different strangers.

It’s wonderful, please never stop, is what he doesn’t say. He doesn’t say anything else at all. His eyes remain closed. Breathing, but barely.

When she’s finished, she gently squeezes his hands to let him know. He gives a small whimper; feels light and dizzy and strange. He telepathically asks her to touch him again, but she clears her throat and shifts on the bed. He swallows and opens his eyes, feels the invisible tie sever and snap; his body feels cold without her touch.

She reaches over and wipes the tear that’s fallen down his cheek. He wasn’t aware of it but it’s there. ‘You good?’

The rain’s started to fall outside and there’s a dull patter against her window. Eli shudders as he remembers he doesn’t have a jacket and that he will need to walk fifteen minutes to the bus stop, sit in his sodden wet clothes for twenty minutes on the bus and then walk a further five minutes home. He worries the smell on his arms will be replaced by something duller. The touch of her fingertips on his skin will be washed away by the rain. The comfort of his surroundings will dissolve, and it will be like he dreamt the whole experience.

‘I’ll call you a taxi,’ she says, as though she can read his mind.

He shakes his head. ‘I can’t afford…’

‘I’ll pay. I don’t mind. Get dressed and I’ll see you downstairs.’

She leaves and he does as he’s told. He stands up and feels like he’s floating, newly revived, as though anything is possible. He fastens the laces of his trainers and takes one final glance around her room, soaking it in. She’s waiting downstairs like she said. He smiles shyly. He means to look at her face but it’s her shoulder that meets his eye. Softened and rounded by the edges of her dressing gown.

‘That’s the taxi outside,’ she says.

He nods, the lights flood the living room as the cab pulls up, blinding. He looks away from the window and back at her shoulder.

‘Thanks for-, just thanks,’ he says, quietly.

She hands him the envelope and he places it in the pocket of his jeans. He looks up and smiles at her, remembering who he was when they were together.

In the taxi, he fingers the bottle of ointment he pocketed when he was dressing and brings it up to his nose.

Inhales. Exhales. In. Out. Better.

Hannah is a writer from the North East of Scotland and is studying for her MFA at the Manchester Writing School. Her debut novel was longlisted in Helen Lederer’s Comedy Women in Print Award in the unpublished category and her short story was Highly Commended in the Bridport Prize. Her novella Small Things was Highly Commended in the Bath Novella in Flash Awards and was recently published by Ad Hoc Fiction. She has forthcoming writing in Litro. She tweets at @HannahWrites88.

This creative piece was submitted as part of our November theme: RELATIONSHIPS. If you would like to submit your own creative work to aAh! Magazine to be considered for publication check our latest theme and call for submissions.