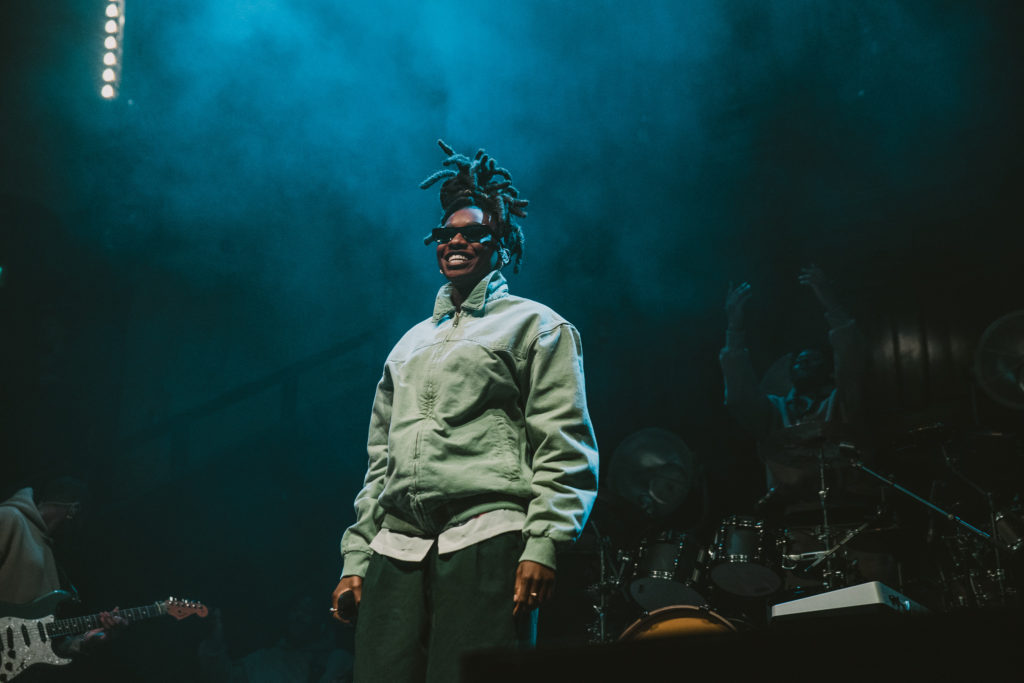 Little Simz headlined a sold-out show at Manchester’s very own Albert Hall, touring her latest release, Sometimes I Might Be Introvert. There was a definite buzz amongst the whole crowd, as the excitement amongst the fans brewed in anticipation of Little Simz arrival on stage, while the room was filled tightly from the front to the back.

As the stage lit up brightly, ‘A Rapper That Came to Tea – Interlude’ played throughout the speakers filling the room, “What’s a girl like you doing in a place like this?” The Crown’s Netflix star, Emma Corrin’s voice echoed. The crowd cheered as Simz and her band entered the stage, opening with ‘Introvert’. It’s almost as if Little Simz wrote this song with an image of herself taking to the stage at her very own headline show in mind, with the drum roll being the perfect announcement of her powerful presence.

The setlist was heavy with songs from her most recent release, however, the crowd didn’t seem to mind, as the theatrical element to this album makes the Albert Hall the perfect place to hear these new tracks live. The atmosphere in the venue was unmatched from start to finish, the excitement exuding from the crowd was relentless, as they tried to keep up with Simz’ ruthless pace.

Little Simz’ backing band didn’t go unnoticed, as the good vibes that they gave off contributed to the ambience. Highlights from the set included ‘I Love You, I Hate You’, ‘Speed’ and of course, ‘101 FM’, which saw the whole room bouncing from the front to the back, transporting the audience to a completely different world.

The encore featured fan favourites ‘might bang, might not’, ‘Venom’, and ‘Woman’. Simz’s live performance is euphoric, empowering, and emotional for everyone in the crowd. This performance is a reminder of why Little Simz’s albums have been so critically acclaimed. Simz’s placement on the official Reading and Leeds line-up is something to look forward to, as it sees her return to the North for a well-earned slot at Leeds Festival, prior to Dave’s headline set. The gig gave an insight into what it will be like to see Simz on the main stage at a festival, and will be remembered for a long time by those who were present.

Little Simz’ headline performance at the Albert Hall was an invigorating welcome back to live music full of authenticity and empowerment.

Little Simz’ Sometimes I Might Be Introvert is available to stream on Spotify.