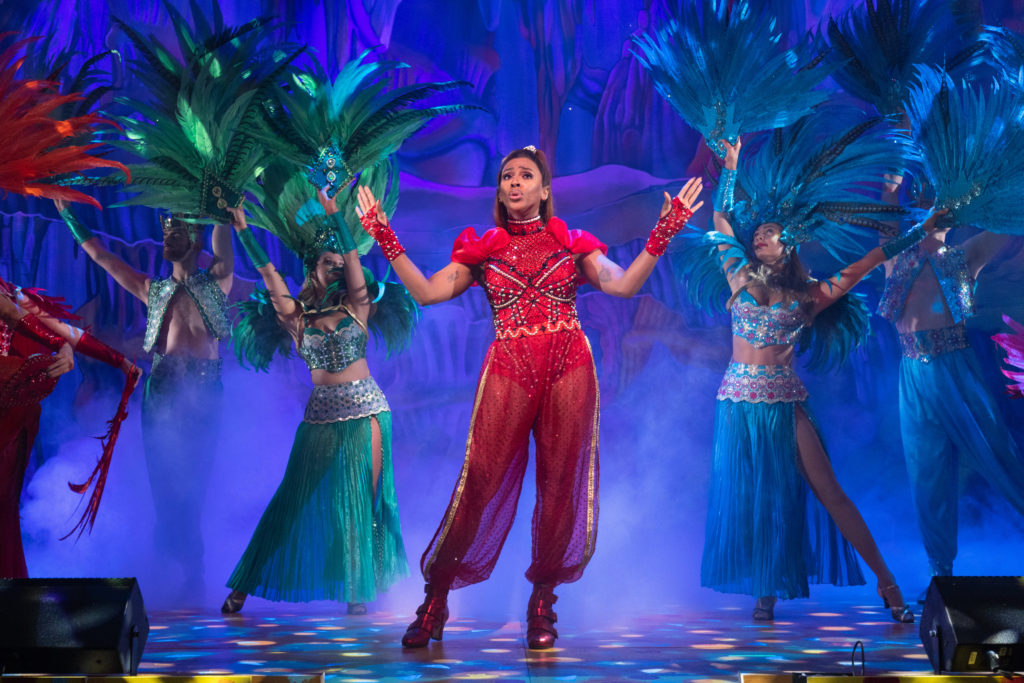 Panto is finally back and 2021’s Aladdin at the Opera House puts on a magical show with flying colours! With creative visuals, charismatic performances and comedy for all ages, this classic pantomime is sure to make all your wishes come true.

Director Johnathan Kiley and writer Alan McHugh bring a production unlike any Aladdin done before, reimagining the famous Middle Eastern folk tale for a modern audience. Even the biggest of panto-Scrooges would crack a smile at this festive production; and because of the effervescent atmosphere throughout the night, also ‘tis the season, we can sweep some of the minor weaknesses under then magic carpet.

We are transported to the land of Mancunia, see what they did there, where we meet our narrator Scherezade (Alexandra Burke) who helps Aladdin (Matthew Croke) on his spellbinding adventure to gain a great fortune and the hand of Princess Jasmine (Rumi Sutton) in marriage. Along the way we fall in love with Aladdin’s mother and brother, Widow Twankey (Ceri Dupree) and Wishee Washee (Ben Nickless) and playfully hate the villain Abanazar (John McLarnon). Aladdin truly captures everything great about pantomime in a joyous spectacle.

The show’s biggest selling point is the powerhouse performance from 2008 X-Factor winner, Alexandra Burke, proving that she is a born talent in her unbelievable pantomime debut. Her strength, as always, lies in her phenomenal vocal ability with bewitching riffs, runs and belts that are just mesmerising. She treated us to not only a rendition of her iconic crowning glory ‘Hallelujah’ but also her hit song ‘Bad Boys’, and though both were irrelevant to the narrative, they got everyone cheering and showcased exactly what Burke does best.

Unlike Burke, Ben Nickless is no stranger to the world of panto with 17 years in his comedy repertoire, and to say his Wishee Washee was a scene-stealer would be the understatement of the year. Played with loveable confidence and impeccable timing, the Rochdale native had the audience in tears, and in true pantomime fashion, had witty double-entendre with winks and nudges for the adults only.

For a show revolving around Aladdin, there was not much of the titular character, having little standout solo scenes. Instead of a strict story, it felt more like a variety show that catered to the immense talents of their featured actors. As mentioned, Burke with her singing her most beloved songs and Nickless with his impression, prop comedy and physical humour. This was in no way a negative, but I hoped we saw more from Croke’s character in his own journey, for example, in the climax Jasmine saves herself from Abanazar, with no help from Aladdin.

But what the show lacks in Aladdin, it makes up for in abundance with theatricality. The production was a sensory sensation, using every special effect under the sun to great impact. The lights, the scenery, the puppetry melding together incredibly, making the night ever more enchanting. It’s mind-boggling to think how they did the ‘flying carpet scene’ so seamlessly, and though personally the Genie was somewhat terrifying, it was all truly impressive and innovative.

The pantomime was stunning, and no one was more stunning than drag legend Ceri Dupree as the panto dame. Dupree was the camp and heart you want from a show like this and had the most fun energy and chemistry with their co-stars. A special spotlight on Widow Twankey’s team of costume, hair, and makeup with two people dedicated to beading alone. The costumes in the entire production were out of this world, and Dupree’s were especially “faaabulooousss”.

If I had one issue with the show, and it’s a common problem with many pantomimes, is that some references were dated and almost cringeworthy. Appealing to a wide audience as Aladdin does, it’s difficult to stay on trend for the teenage demographic, but having an X Factor winner do ‘Gangnam Style’ and ‘floss’ was maybe not the best choice.

However, this did not tarnish the production in the slightest, and it was still overflowing with laughter where it was obvious everyone in the Opera House was having fun, including the actors on stage. They didn’t let little mishaps interfere with the marvellous mood, rather leaning further into the campness and comedy for an overall hilarious night.

Unfortunately, Aladdin is not performing for one thousand and one nights, but rather running until January 2nd, 2022, and I highly recommend for everyone to see it; rub a lamp and make a wish if you must to get a ticket. With a Christmas card on your seat from the Opera House saying, “Panto has missed you!”, it’s ironic as Aladdin is one panto you do not want to miss.

Tickets for Aladdin at the Opera House Manchester are out now.