You are here: Home / Creative / Interview / Manchester / Profile / Who is Charlie Watts? Meet the director who gave Manchester a voice during the 2020 pandemic 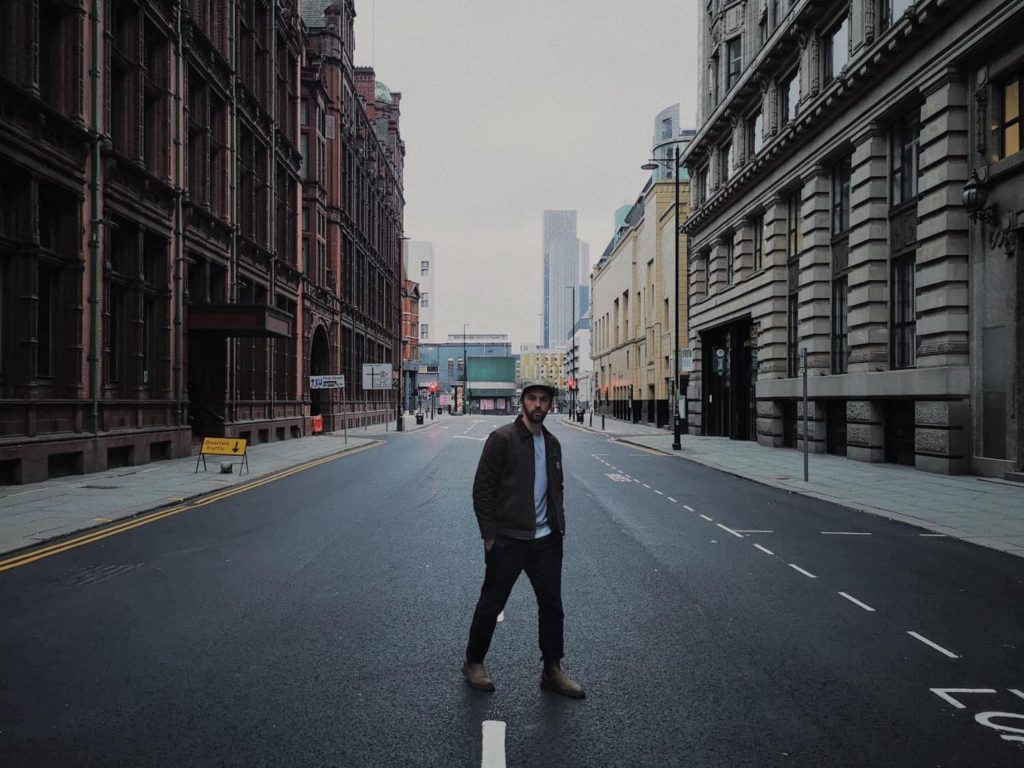 The name ‘Charlie Watts’ may not mean anything to you (and no, I’m not talking about the Rolling Stones’ drummer), but he’s worth knowing about. He’s a director, photographer and living proof that you can create great things, even as the world we know crumbles around us.

On July 20th, he released ‘Distant Future’ – a five-and-a-half-minute film documenting the “anxieties, struggles, tragedies and joys” that Mancunians have experienced at the hands of COVID-19. To say it was well-received would be an understatement.

However, no story should be told from the middle, so before we talk about Distant Future, let’s start at the beginning.

Charlie was born on July 8th, 1990 and grew up in Great Moor, Stockport. He became aware of film and media at a young age thanks to his father, Paul, who worked as an ITV cameraman.

“When I was a kid, he’d always bring his big broadcast camera home and I subliminally got into it. I knew of the industry, even back then,” says Charlie.

Film had always played a part in his studies. In 2009, Charlie was accepted at Salford University, studying Media Production and Professional Broadcasting, leaving with a first-class degree under his belt.

Like many graduates, Charlie went from company to company, working for free in hope of being noticed and was eventually recruited by marketing & advertising agency, McCann, becoming their newest ‘Junior Videographer & Editor’.

It was also around this time that Charlie bought a new piece of equipment: The Canon EOS 70D DSLR Camera.

An avid photographer, he would venture into Manchester and, as he put it, “walk up to complete strangers, smile at them, take a photo and walk off”. Although he enjoyed photography, something was lacking.

“I got frustrated. I started to think things like “In this picture, it’d be nice if he had his arm around her”. I thought next time, I’m going to go out and film instead – and that became ‘The Quarter’,” he explained

‘The Quarter’, is a three-and-a-half-minute video full of slow-motion, long lens clips of the Northern Quarter, set against a melancholy composition. Its structure is simple, perfectly encapsulating the beauty of Manchester.

The video was posted to Vimeo on a Monday and by that afternoon, people had already started to take notice.

“I had the Manchester Evening News ringing me up saying it was great and that they wanted to put it on their website. This was six years ago, before things went viral, but by the week’s end it had 10k views,” Charlie says.

Going forward in his work, many of Charlie’s projects are focused on people and the human elements of stories, as this is something he’s fascinated by.

Having left McCann in early 2016, Charlie focused on showcasing his work by making a website and steadily creating content. It was these passion projects that caught the eye of Chief, a major Manchester-based production company, who wanted him as a director.

This was a major feat for Charlie, who years earlier had contacted Chief via Instagram and promised them he’d be on their roster someday.

Having been at Chief since 2017, Charlie was keeping busy with several projects, or rather, this was the case until news of COVID-19 broke. Although he initially decided to take time off during lockdown, he soon yearned to flex his creative muscle.

“Lockdown became a story I wanted to tell it but I didn’t have the capabilities to travel, I couldn’t even go as far as Birmingham. It soon became “How do I tell this story on a smaller scale?” he recalls. This became ‘Distant Future’.

On a non-existent budget, Charlie and a team of creatives travelled to Stockport, Bury, Oldham and Manchester to film. While many interviewees had been contacted beforehand, some locals were also interviewed.

The video shows an assortment of perspectives, joyful, depressed and every emotion in-between. In one heart-breaking moment, a mother tells of her young daughter monitoring the news to see how many COVID-19 deaths there were that day.

The video is beautifully shot, and clearly shows attention-to-detail, from the 4:3 framing to illustrate a boxed-in feeling, to choosing not to film any Northern landmarks, in the effort to make it look like a typical “working class” UK.

The video received acclaim from countless platforms, including the Manchester Evening News, I Love MCR and was also a staff pick on Vimeo, which Charlie is especially proud of. With over 29k views, ‘Distant Future’ stands as one of Charlie’s most-viewed videos of all time.

So, now you know the story of Charlie Watts, a man who fought to be where he is today and is showing people, especially those in the creative and media industries, that you can thrive in these dark times – in fact, it’s entirely possible to produce some of your best work.

“We’re an industry of problem solvers and thinkers, so I’ve never been worried that this will completely halt our craft.” Charlie concluded as our mid-afternoon Zoom call came to an end.

As a journalist currently adjusting to a full-time online environment, his story and his words fill me with hope.