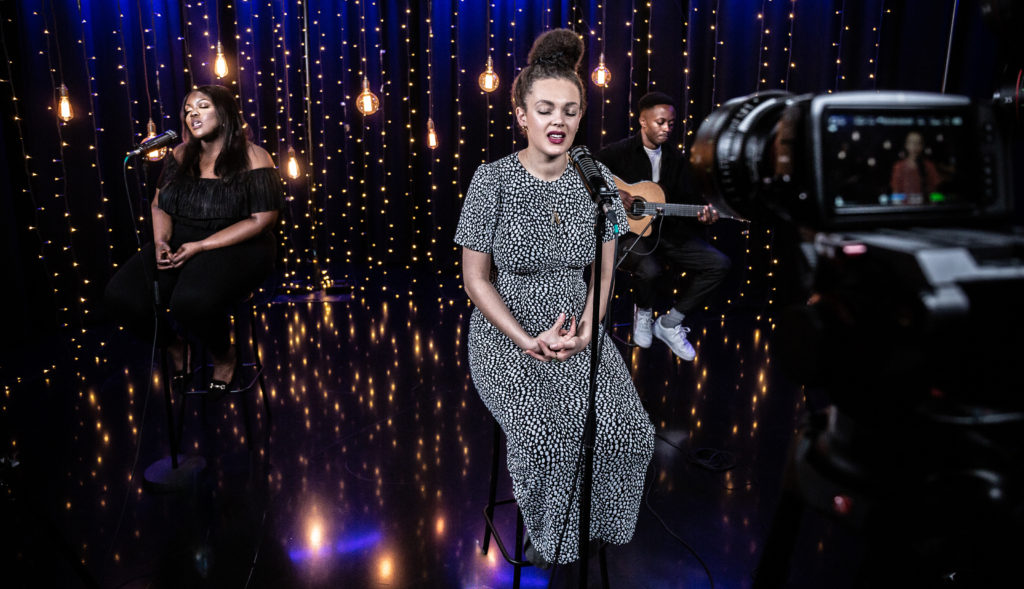 For those who are not already aware, Art School Live offers a series of live-streamed gigs and events which are filmed and produced around the Manchester School of Art. Throughout the production of shows, technical students will collaborate alongside staff, gaining invaluable work experience. Each individual show demonstrates the talent of Manchester’s students while helping to promote either a local band or artist.

Due to Covid-19 social distancing measures, the set was unable to host an audience, which would presumably provoke a sense of emptiness to the performance. However, this was not the case. Despite the lack of audience, Hayes’ ultra-soothing vocals accompanied by a minimal, yet atmospheric backdrop provided an inviting and intimate feel to the entire performance. The students and staff who worked on the production of the set (camera operators, lighting, video editing, sound) deserve equal praise and recognition.

Hayes kicked things off with a brief introduction to band members, Dija (backing vocals) and Nii, (guitarist) before going straight in with her first song, ‘Stay with Me’. It served as a wonderful introduction to Hayes’ haunting vocals, which brilliantly combine sounds of RnB, Jazz, and soul. In a previous interview with aAh! Magazine, Hayes said that she is inspired by Neo-Soul music, “I listen to a lot of Neo-Soul music (Erykah Badu, Jill Scott, Musiq Soulchild, Dangelo), and I also love artists such as Nao, H.E.R, Jordan Rakei, Tom Misch, Snoh Aalegra and SiR.”

Following this were two slightly livelier numbers, the first of which was ironically called ‘Jump’ and the second ‘Closer’. Hayes introduces ‘Jump’ by stating this was the first song she wrote and released, giving the track a more personal feel.

Midway through the set, we were treated to an emotionally charged performance of Hayes’ most recent hit ‘Rewind, Reload’, which she says is yet to be released. As the song begins, we become immediately drawn to the beautifully soft guitar solo which introduces the song. During the intro, our focus becomes ever more intensified through the zooming in of the camera, something which tastefully added to the tone of the song. Hayes allows us to feel her pain through lyrics, such as “letting you in is what I regret every morning”.

Next, we were swiftly presented with yet another lively track ‘hate on me’, where afterwards Hayes coyly comments “it’s always a fun one” – it’s easy to see why. Introduced by some lovely backing vocals, and an upbeat melody, the song appears as a positive reaction to the emotion and pain felt within the previous song.

To conclude the set, Hayes serenades us with the final tracks ‘Ocean’, preceded by her most recently released single ‘Save Ourselves’. The latter has received some serious air time, being played on the likes of Radio 1’s Huw Stephens on his BBC Introducing Segment and BBC Radio 2’s Jamie Callum.

‘Save Ourselves is a song which, despite Hayes’ delicate voice and the mellow guitar, carries a strong message regarding environmental activism. In an interview with aAh! Magazine, Hayes says this is a song she “believe[s] everyone can relate in some way, as the song was so heavily influenced by the human race and how we treat the environment.” With thought-provoking lines such as, “This is our home here/don’t you want to be here” and the chorus, “Is it too late now to save ourselves/ running away that’s what we do so well” – we are reminded of our tendency to disregard the planet and ultimately the reality of our future if we do not make a change – and enchanting end to a beautiful set.

Keep up with Mali Hayes:

Keep up with Art School Live: