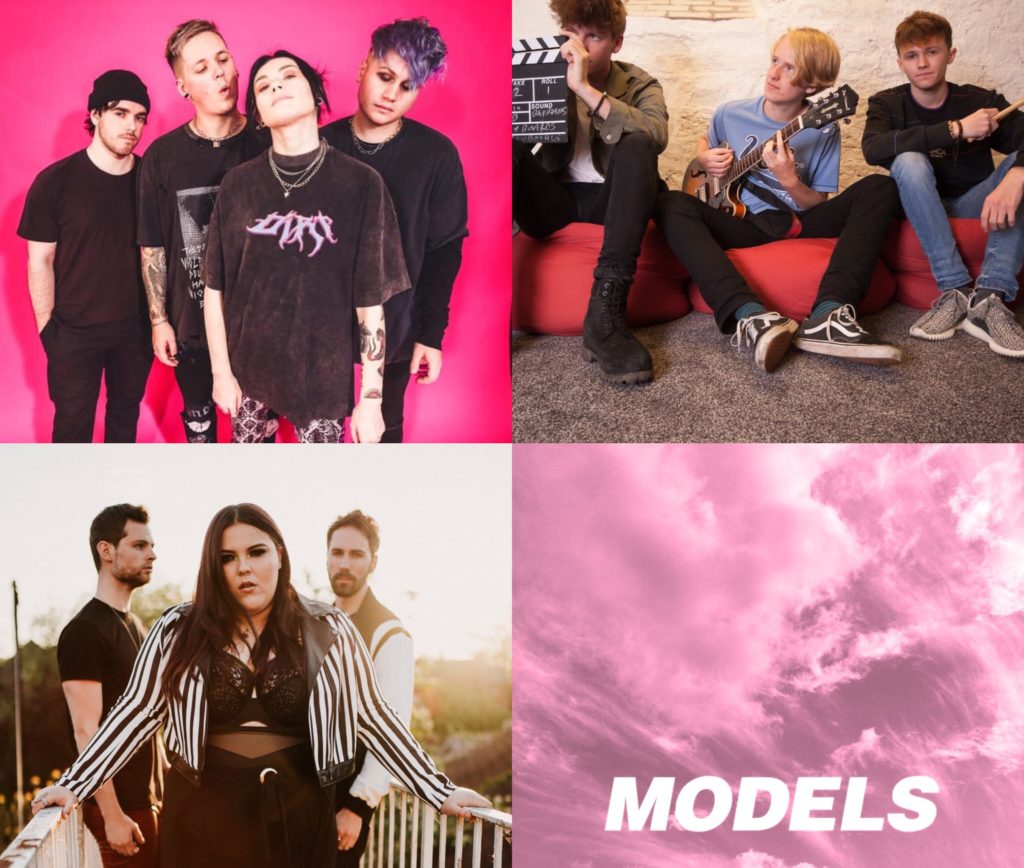 It’s that time of year again, as we crash headlong into the ‘roaring twenties’, that aAh! Magazine unveils the selection of bands that will make up your soundtrack for the year. Last year was arguably one of the best for both unsigned and quickly emerging talent. We kicked off 2019 by naming Manchester-based bands Carnival Club, King No-One, Fuzzy Sun and Broke Casino as being the ones to watch, and were proved right by the successes of each band from sold-out shows to popular new releases. The thriving Manchester music scene is constantly evolving and this year will prove no different. With a range of music from Hot Milk‘s signature punk-fuelled offerings to BAYBOARDS’ indie dream tunes, here are the hottest new bands of 2020.

Comparing yourself to The Psychedelic Furs, “diffused with folk monsters like Roy Harper and Nick Drake, but with added assured Northern attitude”, would seem a heavy claim at first. However, rising three-piece BAYBOARDS are making all the right sounds. They hail from Chapel-en-le-Frith, the gateway to the Peak District which sits right between Manchester and Sheffield.

The band consists of Ben Coley on vocals and rhythm guitar, drummer Javan Carrington and Will Patterson on lead guitar. They have successfully adopted an indie-pop-rock sound and currently have a few offerings on Spotify. Their latest release ‘Infinity’ shows a slight breakaway from the more muted tones of ‘She Cries For Amusement’. ‘Infinity’ really is a guitar-centred masterpiece and contains a perfect gritty guitar solo, with meshes well with Coley’s vocals. Fans of Catfish and The Bottlemen and The Magic Gang will adore them.

Catch them on tour: Friday 7th February @ The Bread Shed for £9

Growing 3-piece MODELS have, by their own admission, hoped to mirror their success on indie heavyweights The 1975. However, they’re quickly forging their path in the Manchester music scene and beyond. The band includes Joey Riley on lead vocals and guitar, Liam Walsh on the drums and bassist Chris Bush. Describing themselves as “unapologetically a pop band”, they are known to place the theme of love at the centre of their tracks with expertly crafted melodies. They also claim that they’ll “surely find a way into your heart”, and after listening to track ‘Find It’ it’s not hard to see why. A melodic number dripping with synth, it wouldn’t be out of place on a 1975 album. However, after picking up for the chorus, the unique vocals from Riley shine through. Lyrically it’s stunning, with a multitude of gems such as “When all is lost, love stays”. If you’re a fan of The 1975 or Fickle Friends, give MODELS a listen.

Rowdy and riotous, the atmosphere of Hot Milk shows are not for the faint-hearted. Despite this, you’ll quickly find that the collective community spirit of the crowd and the band combined are as comforting as a glass of ‘Hot Milk’ and a cookie. They even state themselves that they “want to invite you in, exactly as you are and unapologetically”. In 2019 they played 69 shows in 20 countries and even supported The Foo Fighters. The members consist of Jim Shaw and Han Mee sharing guitar and lead vocal duties, bassist Tom Paton, and Harry Deller on the drums. They are a self-proclaimed “power pop movement” and a voice for the voiceless, especially shown with political-centred latest track ‘Candy Coated Lies$’, whilst Track ‘Wide Awake’ is a catchy, electronic pop track with the dual vocals balancing it perfectly. Fans of Stand Atlantic and ROAM are sure to love this growing hard-hitting band.

A strong-female fronted band taking on the male-dominated industry, with an open supportive voice for the LGBT community isn’t something which comes along often. Frontwoman Anastasia Walker’s vocals are described as “Once in 20 years”, and are backed up by guitarist Ross Cameron and Richard Gartland on the drums. They form the enigma which is Bang Bang Romeo.

However, it’d be foolish to limit them as merely a ‘female-fronted band’. It may be one of their biggest assets but this band exceeds all limits. Their discography is a mixture of tear-jerkers and empowering anthems. Industry leaders are starting to take note with NME pinning them as a “Sheffield soul-rock phenomenon” and Radio X describing their sound as “huge” and “like a hard-edged Fleetwood Mac”. 2019 saw them not only tour with longtime success P!nk, but also release their debut album A Heartbreaker’s Guide To The Galaxy.

Every track is a cinematic masterpiece, as they explore relationships in all their complexities. ‘Shame On You’ is a sultry signature number and contrasts with the power-house number ‘You & I’ as they view a relationship which has become intoxicating and obsessive. They’re hellbent on taking us with them on their journey to stardom, and we’re all too happy to join them. If you’ve been enjoying YONAKA or Marmozets, be sure to give them a try.

Now we’ve acquainted you with our predicted stars for the year, we hope that you’ll give them all a chance. They’re only just getting started.