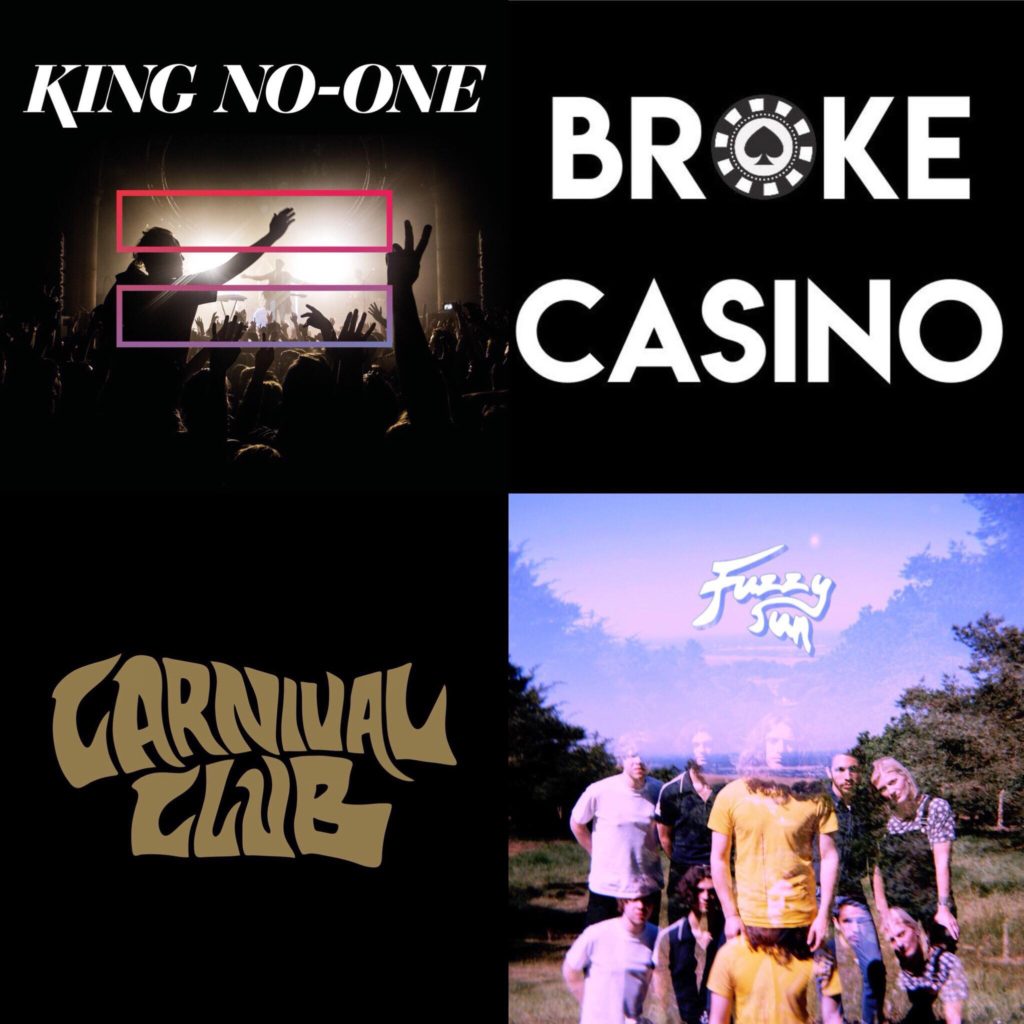 It’s time to continue ringing in the new year with a selection of the current rising stars of the music world. Each are gaining success with their originality and impressive work ethics.

The birthplace of some of Britain’s greatest bands, from Buzzcocks, Joy Division and The Smiths to the Happy Mondays, the Stone Roses and Oasis, Manchester seems a fitting place for rising bands Carnival Club and King No-One to begin their journey. If that’s not enough, Fuzzy Sun and Broke Casino are also showing that there’s more than enough reason to put Manchester’s name back on the music map.

Without further ado, here are the next four bands who rightfully demand to be listened to.

Four-piece band Carnival Club, consisting of Kai Jon Roberts (lead vocals and guitar), Eddie Moxon (lead guitar), George Peel (bass) and John Azopardi (drums), may presently be relatively unheard of, but they are quickly making themselves known within the Manchester music scene. Republic Music Magazine have described them as “the new patron saints of rock n roll” – weighted acclaim, but it is much deserved. Their latest EP, Nomads & Crooks, demonstrates a progression in their sound, and features stand-out tracks ‘Follow the Sun’ and ‘Sin City’. Gritty riffs and strong vocals aplenty, their sound is perfect for fans of fellow Manchester rock band The Blinders and heavy-hitters Rage Against The Machine. A first song to listen to would have to be ‘House of Cards’. However, ‘Headache’ definitely deserves an honourable mention, as well as their cover of Ariana Grande’s hit song ‘God Is A Woman’, which, contrary to most other covers, really does give the original a run for its money.  Live-wise, whether it’s a crowd starting an impromptu circle pit or Jon Roberts taking a leap into the crowd, action is at the centre of their shows, and they are definitely much-loved for it.

Indie rock band King No-One, consisting of Zach Lount (lead vocals and guitar ), Joe Martin (lead guitar) and James Basile (drums), are a real rarity in the music world. In their relatively short time as an active group, they have not only played Leeds and Reading festivals, but they have also headlined at the 02 Ritz. This is already no mean feat, but even more remarkably, they have achieved it all while unsigned. There should be no limit for what this band will achieve in the future with these achievements already being them. Fans of The Hunna & Sundara Karma will particularly enjoy their music. ‘Antichrist’ is the perfect song to start you off, as its cutting lyrics and haunting melody are guaranteed to become ingrained in your mind. They are also gaining notoriety as a live group, as they thrive on creating a performance. Donning everything from body glitter to vinyl suits, frontman Lount in particular never disappoints.

Catch them on tour:

Any band to tour with indie legends ‘Blossoms’ is definitely worth a listen, and Fuzzy Sun are no exception. Catchy and atmospheric, this five-piece, made up of Kyle Ross (lead vocals and guitar), Daisy Valentine (vocals, keyboard and synth), Raffaele Pani (guitar), Lewis Jobson (bass) and Mitch Bancroft (drums and backing vocals), have all the ingredients to make it in the indie world. Their music is an eclectic mix of 80’s synth pop with a dash of electronica, and fans of The Night Cafe and Sundara Karma are guaranteed to love them.  ‘Eve’ is arguably the best track with which to introduce yourself to the world of Fuzzy Sun, offering a fusion of high-powered melodic bliss and shining vocals. This band are also excellent live, mirroring the passion of their audience in creating a vibrant atmosphere.

Catch them on tour: Saturday 23rd February @ Gorilla for £11

Broke Casino may only have one song released on Spotify so far, but these lads are just getting started. They are the quintessential step back to old-school rock and their track ‘Bleach’ offers a definite nod to Fluorescent Adolescent-era Arctic Monkeys. The band includes Ralph Schofield (vocals), Ollie Boon and Sam Wilks (guitar), Patrick Barwick (bass) and Match Sienkiewicz (brums), yet, despite this large lineup, they utilise their instruments to the best possible degree. While Schofield’s vocals may at times be hard to make out, this creates a reminiscent sense of artists from past eras, rather suggesting poor production. It may be early days for them, but their performances have an electric atmosphere. With inflatable dice and a raucous sound blasting from the speakers adding to the mix, it’s definitely a unique experience and not to be missed.

Catch them on tour:

No matter whether your musical New Year’s Resolutions included attending more gigs, listening to more new music, or something completely different, be sure to listen to each of these bands. They are all are certified diamonds in the rough, and you really won’t regret it.