You are here: Home / Culture / Manchester / Music / Live Review: There Ain’t No Rest For Cage The Elephant During Headline Gig at Victoria Warehouse 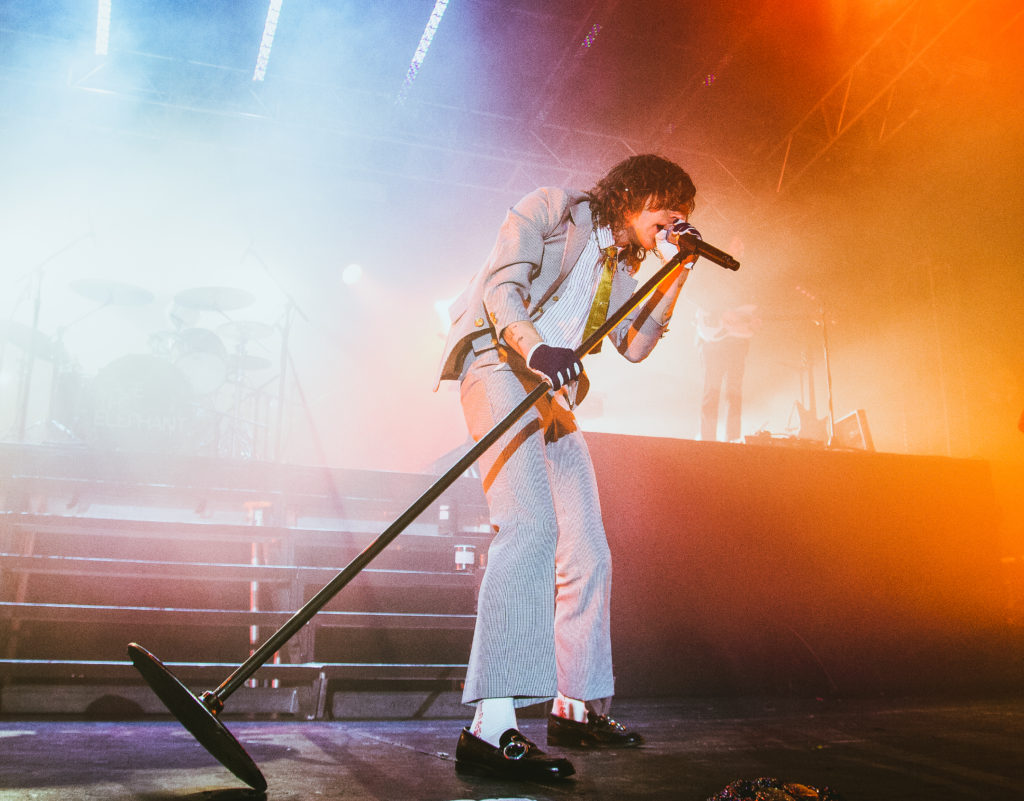 3,500 fans, three bands, one venue and a large dose of energy for good measure. Showcasing the best newest and greatest bands in the music industry, Cage The Elephant’s headline gig at Manchester’s Victoria Warehouse was certainly going to be a night to remember.

Cage The Elephant’s comeback wouldn’t be complete without the addition of two rising talents to their show. SWMRS brought their signature Americana punk sound and Chicago-based band Post Animal also showcased their psychedelic rock tunes on the night. Each band may have been far from their native America but they were quickly welcomed by the Mancunian crowd.

Before Cage The Elephant could take over the stage, moustached gang Post Animal were ready to make their mark. The exciting quintet consists of bassist Dalton Allison, Jake Hirshkan on guitar and keys, guitarist Javi Reyes, drummer Wesley Toledo and guitarist Matt Williams. You may recognise past member Joe Keery from Netflix’s hit series Stranger Things, who’s swapped the guitar for more time on screen. The crowd initially appeared hard to please but the band took it in their stride and set up a good atmosphere.

It was immediately clear that the instrumentals are where this band thrives. They were all beautifully in sync and made a strong start to the show. Riff-powered track ‘Gelatin Mode’ reminded the audience that they were in for a psychedelic-rock-indie extravaganza.

Not a band to play it safe and stick to one genre, the contrast between tracks such as the melodic and slower ‘Ralphie’ and synth-guitar driven song ‘How Do You Feel’ showed the band can do it all. Each member shared lead vocal duties, which gave them a full-bodied sound, while the excellent acoustics of Victoria Warehouse allowed their voices to carry. Track ‘When I Get Home’ is their most popular track to date and was illuminated by blue and pink lights and exhilarating dance vibes. The keys took over, the catchy riffs leaving the crowd no choice but to bob to the beat.

Last track the aptly named ‘Dirtpicker’ contained the dirtiest riffs of their set. It led to fans cheering before it could even begin as they used the electronic reverb and drums to power up the track. Post Animal can be content that they’ve already cracked America, and it surely won’t be long until they’re easily headlining major venues in the UK.

Not a band to shy away from unleashing their loud and proud sound on the crowd, American high-power punk-rock band SWMRS were taking no prisoners. The band was formed when vocalist Cole Becker and drummer Joey Armstrong (the son of Green Day’s Billie Joe Armstrong) watched the film ‘School of Rock’ as kids. They were backed up by touring member guitarist Henry Webb-Jenkins, guitarist Jakob Armstrong and bassist Seb Mueller. After surviving a van crash last November which left guitarist Max Becker absent from the band, they still gave it their all.

Opening track ‘Palm Trees’ is perhaps one of their better-known tracks, and set the tone for the show as Cole Becker encouraged them clapping from the offset. He was a true hurricane on the stage. The energy was carried by classic SWMRS track ‘D’You Have A Car’, with an almost Fall Out Boy ‘Dance Dance’ style introduction.

Before diving into track ‘Miley’, the band took the time to address the ever-present issue of sexual harassment at concerts as they noted they’d stop the show and “kick that piece of sh** out” – a move which undoubtedly earned them an immeasurable amount of respect, as the crowd cheered in agreement. Their set also featured a cover of Supergrass’ song ‘Alright’. They managed to add their own modern-rock influence to the number, bringing the well-loved track up to date.

Final track ‘Figuring It Out’ was dedicated to Cole Becker’s brother, Max Becker, who couldn’t be there as he was recovering but surely present in spirit. In the end, Armstrong held the mic to the crowd as they sang the last lyrics back to the track. They finished with a typical peace sign and that they “hope [they’ll] see [us] soon”. As do we and with Max Becker in his usual place, performing at the same venues as their beloved Mancunian idols.

Few people can command a stage like Matt Shultz. Dressed to impress in a light grey suit and golden-yellow tie, he was going to be the ringmaster of the night. More than ready to orchestrate Cage The Elephant’s revival. The band hadn’t returned to the UK since their sold-out show at the infamous Brixton Academy in 2017, so their return was long overdue. This Grammy-Award winning band consists of vocalist Matt Shultz, rhythm guitarist Brad Shultz, drummer Jared Champion, bassist Daniel Tichenor, lead guitarist Nick Bockrath and Matthan Minster on keys.

Matt Shultz‘s divorce may have pushed the explosive writing of Social Cues however, the audience’s consistent excitement certainly drove the live performance. Opening track ‘Broken Boy’ from latest album Social Cues, was met with cries as a pulsing red light and drums signalled their return, as the audience climbed on each others shoulders singing “I’m an alien” and Matt Shultz jumped with the mic stand.

Schultz was a strange spectacle throughout the show, his facial expressions as mesmerising as the music, completed with a sparkly top hat for ‘Cry Baby’. With an audience member waving a t-shirt in the air, the so-called ‘Newport Helicopter’ seen at shows such as Skindred’s, made their enthusiasm recognised. Always the optimist Matt Shultz announced: “Manchester it’s a pleasure to be here… we’re Cage The Elephant, let’s celebrate life, how about that?” The theme of celebrating life was at the forefront of their set from the beginning.

Track ‘Ready To Let Go’ had the audience copying the wildcard of a frontman, with even a 14-Year-old member perhaps inappropriately shouting to Matt Shultz “I love you and want your babies.” The band may have been around the circuit a few times but they certainly haven’t lost their magnetising touch. Throughout the show, Matt Shultz defied gravity with his dedication to bringing yoga to the show.

The crowd-pleasing track ‘Ain’t No Rest For The Wicked’ has stood the test of time. It gave rise to the biggest rock ‘n roll moment of the show with Brad Shultz throwing his guitar behind him and stage diving into the crowd. It was swiftly followed by their high-powered, psychedelic number ‘House of Glass’, which saw the first use of fire during the show. This is a band which doesn’t require pyrotechnics to shine, but it certainly didn’t harm the theatricality of the show. Before launching into the next track he took the liberty of announcing he was “gonna have a drink”. After taking a swig of the bottle, he generously threw the rest over the cheering crowd.

Their last song before the encore high-powered number ‘Teeth’ cut into the audience, completed with white flames, and red and blue lights.  While the audience was overhead clapping, Matt Schultz took the time to climb into the audience, standing upright helped by his fans as a torrent of red and white confetti swirled around the venue.

The band couldn’t make their departure without a solo performance from Matt Shultz of ‘Love‘s the Only Way’, as he returned for an encore. He was given a guitar and stool and announced that he hadn’t “played this song in a while”. It was a moment to cherish. The last hurrah from the band was marked by their final track on the Social Cues album ‘Goodbye’. It was a lasting impression that this band is anything but past their sell-by date, and we should be expecting to hear more from them soon.

They may have sauntered off stage to Queen classic track ‘We Are The Champions’, but in reality, everyone present was a winner after witnessing Cage The Elephant’s first-class set.