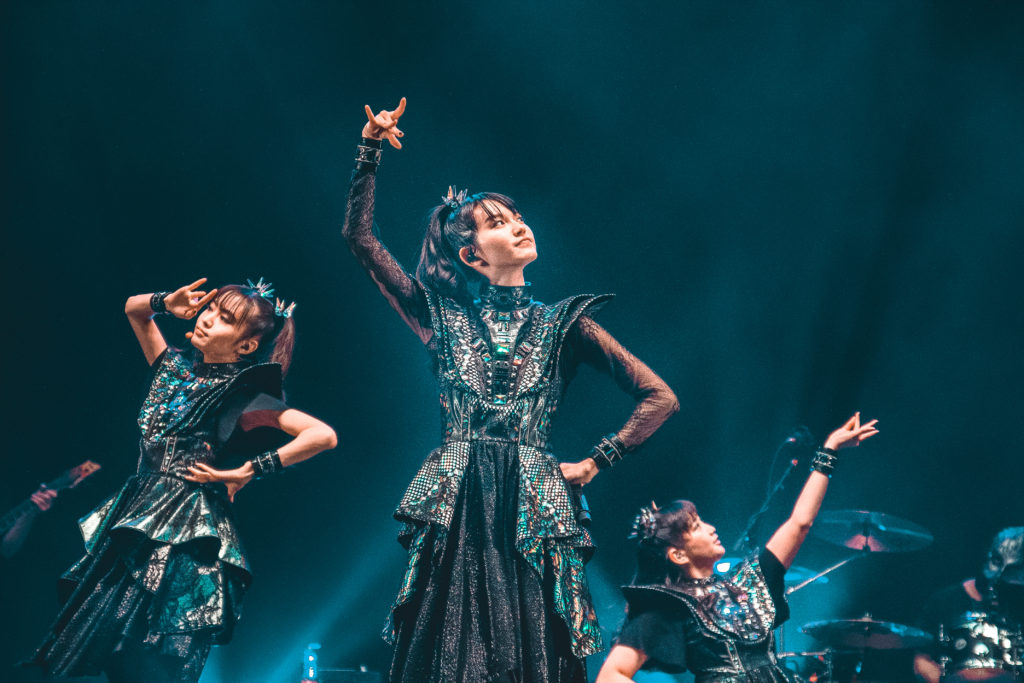 Touring off the back of their latest album, Metal Galaxy, which was released via BMD Fox Records late last year, Babymetal brought their out-of-this-world show to Manchester’s O2 Apollo, alongside horror-punk heroes Creeper.

The combination of their bubblegum pop Japanese vocals against the thrash metal backdrop of the ‘KamiBand’ was welcomed into what can sometimes be a restrictive metal scene.

A fitting band to warm up the crowd on what was a cold, damp evening was punk rock six-piece Creeper. Opening with one of their latest singles, ‘Born Cold’, the band proved they are taking no prisoners with their return.

After a brief hiatus that begun in 2018, Creeper are officially back and bringing along new theatrics.

It was clear some of the Creeper army had come to welcome the band back to Manchester for their first show in the city since the end of The Callous Heart era, making it known by singing along to every word of every song with fingers in the air.

For songs from their debut album, Eternity, In Your Arms, the stage-lights flooded purple, with washes of 2017 nostalgia.

Noticeably, ‘Winona Forever’ was a fan-favourite as the room erupted and crowd-surfers made their way over the barrier all starry-eyed as they looked up at the band.

Another highlight was their latest release ‘Annabelle’ before finishing the set on a high with ‘Hiding With Boys’. It was clear Creeper had been well and truly missed.

Suspense filled the room as the crowd waited in anticipation for Babymetal to take to the stage, but first, a space-themed video on a backdrop appeared, making the walls of the room seemingly disappear and portrayed an otherworldly atmosphere.

When Su-Metal, Moametal and their unnamed replacement for Yuimetal (who left the band in 2018), took to the stage, the whole room burst with energy.

Opening with ‘FUTURE METAL’, the crowd-surfers made their way over the barrier, and with the buzzing atmosphere already felt in the room, it was easy to see the gig would be full of step-perfect dance moves and hard-hitting riffs.

‘Da Da Dance’ was played with full-force, as members of the crowd cheered on Su-Metal’s effortless vocals, which have clearly improved over the years.

Watching Babymetal perform live almost felt like standing inside an arcade with hard techno-beats, while the girls danced perfectly in sync as if they were on a winning streak at expert level on a dance-mat.

‘PA PA YA!!’ was phenomenal to observe, a previous live performance played in the background and members of the crowd joined those in the video by waving Babymetal bandanas in time with the infectious vocal lines and bouncy drum beats.

It was clear this song was a fan-favourite as the crowd moved in sync and the energy filled the room from wall to wall. The set was short for a headline act, but Babymetal compensated by giving each song a radiant ‘oomph’, performed with great stamina.

Shuffling through their back-catalogue of hits, Babymetal’s setlist was the perfect mix of old songs and new. ‘Road of Resistance’ gave off an uplifting anthemic feel whilst ‘Headbangeeeeerrrrr!!!!!’ was no popular in the room, as fans formed a circle pit – chaos soon ensued.

Although the set had relatively small production in comparison to other Babymetal shows, it didn’t stop the crowd from making the most of every second and the girls’ effervescence never faltered. We very much look forward to our next trip into Babymetal’s gigging galaxy.