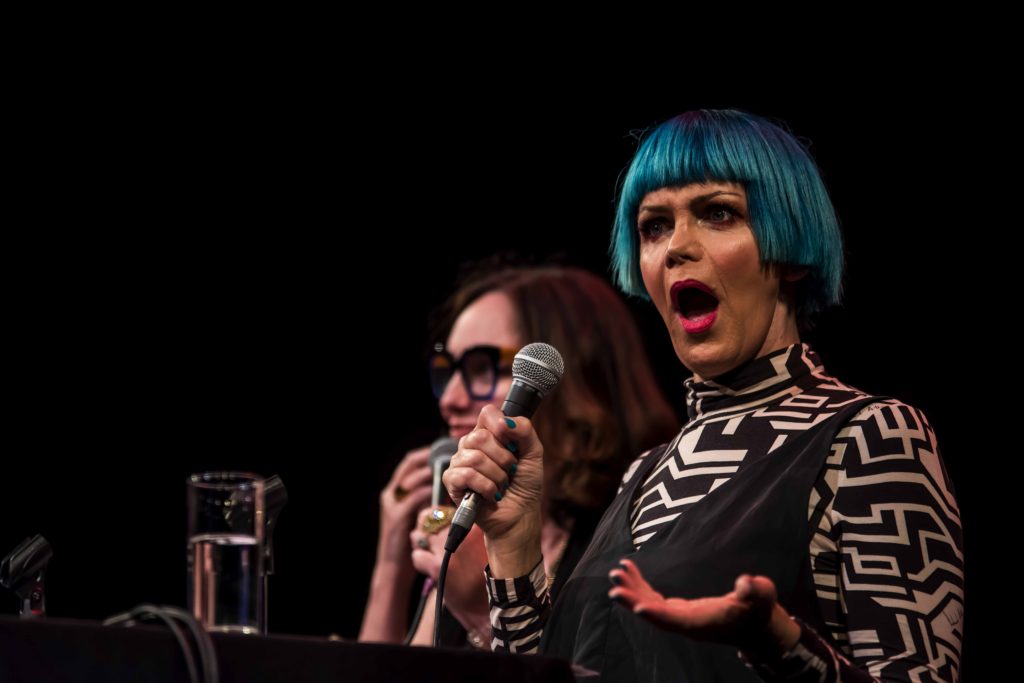 What a Guilty Pleasure!

The Dancehouse Theatre hosted one of the star attractions of the Manchester Podcast Festival on the 5th of November – The Guilty Feminist, hosted by the charismatic Deborah Frances-White. A captivating tone was set for the evening from the start, as excited chatter flitted around a room full of ‘guilty feminists’ waiting in anticipation for the show to begin.

Frances-White’s quick wit and infectious personality bonded instantly with the audience, as she steered the conversation onto the topic ‘Things We Wished We’d Known.’ She introduced a segment called ‘I’m a Feminist But…’, where the panel took turns saying what makes them, well, guilty feminists. It was a great warm-up and set the tone for the show throughout.

Special host, or “co-pilot” as Frances-White called her, Kate O’Donnell, a comedian and trans-activist, was a joy to listen to. She started off a little awkward but quickly gained momentum during her stand-up routine, where she shared her experience transitioning in a time when being trans wasn’t “cool”, which was both comical and insightful.

O’Donnell’s shining moment was when she told the audience how to choose their trans-name, favourite singer and mother’s maiden name, before asking people in the audience to shout out their own. A reoccurring joke of the night followed O’Donnell’s claim that during her surgery, she had the choice of increasing sensation, appearance or depth, and proceeded to take a poll of what the audience would prefer. The verdict was sensation over depth.

Guest Charlotte Keatley, an Olivier nominated playwright, who is extremely well-educated on women’s representation, especially in entertainment, revealed that a list of 100 Greatest Modern Plays from a respected publication only showcased four female playwrights. This shocked the audience, who let out an audible gasp. Keatley provided a good balance of the serious and the informative, combined with the comedic powerhouses of Frances-White and O’Donnell.

Due to a member of the panel dropping out last minute, Frances-White invited a member of the audience to come up and be a special guest. Politics and history teacher Jenny George was chosen, and she stole the show. George was informative and lovable, giving everyone a quick lesson about how she teaches Feminism. She pointed at her female students present in the audience at random and had them say three things great about themselves, which helped inspire and empower them, alongside the entire theatre. George was truly amazing, especially considering she was a spontaneous guest with no preparation.

To close the show the panel was able to encompass the theme of the episode, ‘Things We Wished We’d Known’, by giving advice to their younger selves, two pieces of which really resonated with the audience. Keatley said “don’t waste time trying not to hurt feelings whilst standing up for yourself,” whilst Frances-White expressed that “people believe what you tell them”, and that if you trust yourself and believe in yourself, everyone will too.

With an inspirational turn-out, the event was both informative and insightful but also highly entertaining, discussing issues in a way that stuck with the audience. If anybody learnt anything, it’s that they should always choose sensation over depth.

The Manchester Podcast Festival is still on, with a variety of shows running up until 27th November. You can listen to this episode and many others of “The Guilty Feminist” on Spotify and Acast.

See here for more information on the Manchester Podcast Festival.

See here for more information on The Guilty Feminist.