You are here: Home / Culture / Review / Review: Louder than words – Extinction Rebellion & The Politics of Dancing 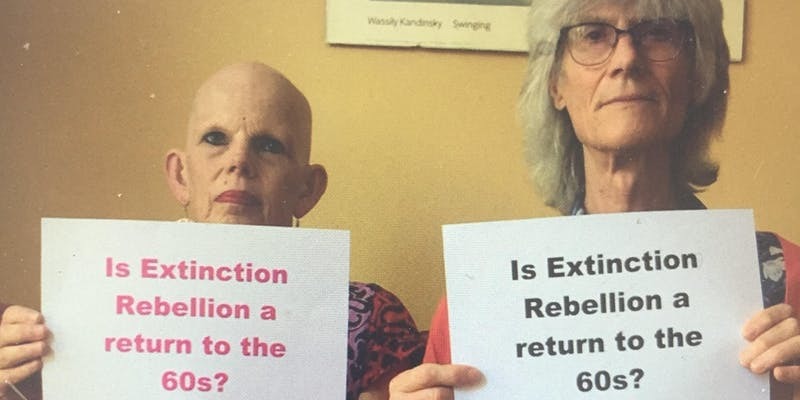 Novelists Leslie Tate and Sue Hampton spoke about being arrested on Waterloo Bridge in London during the Extinction Rebellion protests earlier this year, comparing and contrasting it to their rebellious experiences during the 1960s at the Louder Than Words festival in Manchester, on 9th November.

Tate said his experience as an insecure young man growing up in a repressive 1950s household and arriving at University in the late 60s was one of “taking on a role” – becoming somebody he thought he should be, by experimenting with drugs and the newly-found individualist culture of the time.

He opened the talk by playing the song ‘Do It’ by the Pink Fairies, taken from the title of Jerry Rubin’s book DO IT!: Scenarios of the Revolution published in 1970. Rubin was a founder member of the Yippies; activists who believed that the more radical and visual events were made, the more the media would give them coverage. Rubin once said, “the media does not report news – it creates it. An event happens when it goes on TV and becomes myth.” Ironically, he went on to become a very successful stockbroker on Wall Street in the 1980s.

Tate asked the audience, “just how many people were playing roles to fit into a tribe during this tumultuous time?” For him, the 1960s and early 70s were more sex, drugs and rock ’n’ roll than political. Although ideas of sexual liberation were present, hedonism was more the driving force.

He discussed LSD casualties, those who took things too far such as the pirate radio boss who shot their competitor and the dark side of the hippie dream, like Hendrix, Joplin, Manson, Altamont – events that all appeared, through the eyes of the media, to mark the end to the age of Aquarius.

These events were also eerily similar to how Manchester’s ‘one love’ club scene descended into drugs and violence, as highlighted by poet and radio presenter Chris Jam in the following talk, ‘The Politics of Dancing’. Chris ran dance parties in Hulme in the late 1980s and posed the interesting question: Why are drugs actually needed to dance in Western culture when many other cultures don’t need them?

The recurring theme of drugs was perhaps a difficult topic, as they no doubt cost youth culture movements highly in the past. One of Extinction Rebellion’s main tenets is that alcohol and drugs are banned from protests. In a culture now awash with drink and drugs, deliberate abstinence seems a political act.

‘The Politics of Dancing’ panel kept returning to the idea that the shared tribal experience of dance music was in and of itself ‘political’. Dance music, in particular, knows no class, race or gender boundaries; language has no importance. When a dance record is on, there is no face to that music. It’s the primal beat of the drum bringing the tribe together, and clubbers were often psychologically affected in ways that might then lead to changes in wider society. Although this point could be measured through the lives of the panellists themselves, the actual political impact that rave culture had on ‘the system’ we live in is clearly limited.

Mark Reeder, who was also on the panel, discussed how he moved to Berlin from Manchester in 1978 and started making electronic music in what was then a very underground scene. When the Berlin wall fell in 1989, he and others were putting on raves, often in abandoned buildings along the notorious ‘death strip’ between East and West Germany, where techno club Tresor started out. Mark explained how electronic music helped bring young East and West Germans together and ease the difficult transition. It became clear from both talks that ‘action’ and making things happen is what movements are all about.

Whether it was the 60s or 80s, there were those who partied but were still routed in activism and those who would just rave until it was time to go back to work the next day. Carl Loben of DJ Magazine highlighted the New Age Traveller raves, as covered in the documentary ‘Everybody in the Place’ by Jeremy Deller as “inherently political”. These were a group of sound systems and Pied Pipers, turning up in a field in the middle of nowhere with Castlemorton being the endpoint – 40,000 people raving for one week solid until the police shut them down. The notorious Spiral Tribe collective was arrested and the aftermath was the passing of the Criminal Justice and Public Order Act in 1994.

Sue Hampton was always interested in the politics of the 1960s. The politics of mass civil disobedience and self-sacrifice was a proven method to create political change. She made it clear that it was the politics of direct action combined with the hippie ideals of peace and love that became the foundation of the Extinction Rebellion movement. ‘Emergency’ by Blythe Pepino, which Sue played before speaking, was just part of a larger soundtrack to a movement routed in concrete notions of non-violence and democratic co-operation. Clearly, a ‘feeling of togetherness’ will only get you so far.

For a movement to be politically successful in any measurable way, it must have a manifesto to act upon. With the ‘Politics of Dancing’ discussion, the question kept coming back to whether the rave scene of the late 80s/early 90s had any ‘real’ larger political significance.

When Boris Johnson labelled Extinction Rebellion activists ‘uncooperative crusties’, he was subconsciously drawing a line back to the New Age Traveller Raves and The Peace Convoy, themselves descended from the original Hippie counter culture of the 1960s. In stark contrast to Boris Johnson, we have Jeremy Corbyn, the hippie activist who stood on the picket line with miners, arrested for protesting Apartheid.

The culture war, it could be argued, was won back in the 1960s, but politically we seem trapped within the larger bubble of Capitalism and Consumerism.

You can read Sue Hampton’s experience of Extinction rebellion here.