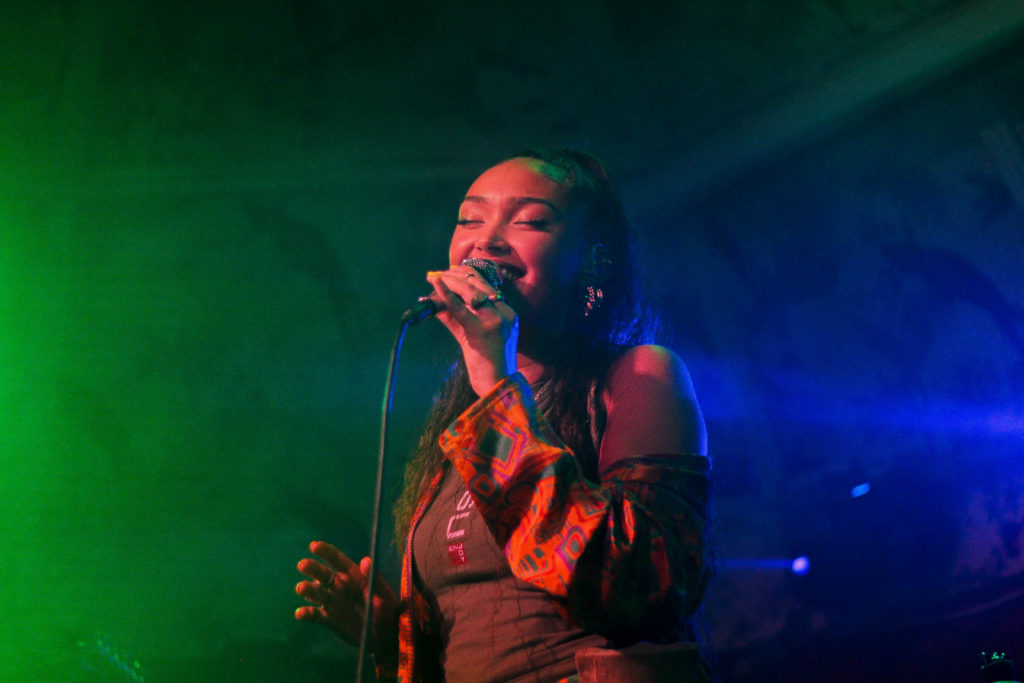 The opening act, Amun, a 23-year-old Somali-British singer-songwriter, came on stage sporting lime green trackies and matching NIKE Air Force 1’s. Her stage presence was clear and unapologetic. Greeting the female-dominated crowd, Amun kicked off the night with her latest track ‘Cycle’, setting the vibe for an energy-filled set which expressed her passion for R&B classics.

She then climbed atop a stool, surprisingly, as a spotlight beamed over her, and slowed down the set, singing a soulful version of her song ’Family’, before snapping back into more fast-paced, trap-influenced songs such as ‘Get Pounds’ and ‘So Cold’. Despite the clear musical contrasts of her slower, more jazz-inspired songs, Amun and her resident DJ got the crowd prepped for a night of celebrating young, female British artists. She dominated the stage and her self-assurance and confidence exuded through her performance.

Headliner Joy Crookes, ambassador for a fusion of cultures with a Bengali-Irish heritage, came on stage to a Bangladeshi backing track and began to chat with the audience. The small size of the Deaf Institutes’ stage gave the gig a far more intimate feeling than anticipated, which only further enhanced the acoustics and visuals of those performing on the night. It even encouraged conversations regarding Halloween costumes – some people came dressed as Joy Crookes herself, whilst another opted for the slightly more interesting choice of Cher Lloyd.

Throughout the night, Crookes, supported by her bandmates Charles Monneraud on guitar, Dayna Fisher on bass, and Adam Wade on drums breached various topics in her music. It’s clear that her sense of identity and London upbringing heavily influences her work. Her song ‘London Mine’, for example, holds a strong political message about the mistreatment of immigrants in the Windrush Scandal.

Other songs in her set-list such as well-known single ‘Mother may I sleep with Danger’ and ‘Yah/ Element’, an ode to American rapper/ hip-hop artist Kendrick Lamar and his DAMN album, enticed participation from the fans, who sang along with every word.

The playful way in which Crookes works with her songs highlights an obvious fact – that she’s a young woman dealing with all the ups and downs of life in her 20s. Her music explores relationships, friendships, self-confidence, and even touches on feminist themes in songs such as ‘Power’. ‘Don’t let me down’, an emotion-filled song that talks of a past relationship with a bitter-sweet end, was a crowd favourite as Crookes picked up her own guitar, proving her talents don’t just lie with singing, and her guitarist Monneraud chimed in with a hefty guitar solo to bring the song together.

Crookes’ knack for storytelling was apparent throughout the gig. She didn’t say that much in-between songs, but let the music speak for itself. She claims her ability with song-writing comes from her family members such as her mother and grandmother, whilst her diverse music taste harks back to when she began listening to a wide range of artists with her father, such as Gregory Isaacs and Kendrick Lamar.

Crookes’ continued to be enamoured by the audience as she belted out songs including ‘Hurts,’, ‘No Hands’, ‘Darkest Hour’ and ‘Since I left you’. She even performed a funky adaption of ‘Sunshine’ allowing the bassist, Fisher, to really shine through. Despite her honest, vulnerable and sentimental songs, her fearless writing and strong viewpoints are still visible.

It’s obvious that Joy Crookes is one to watch on the UK scene as she completes her first headlining tour with a sold-out gig in her hometown, London, at eARTh Hackney on 5th November.