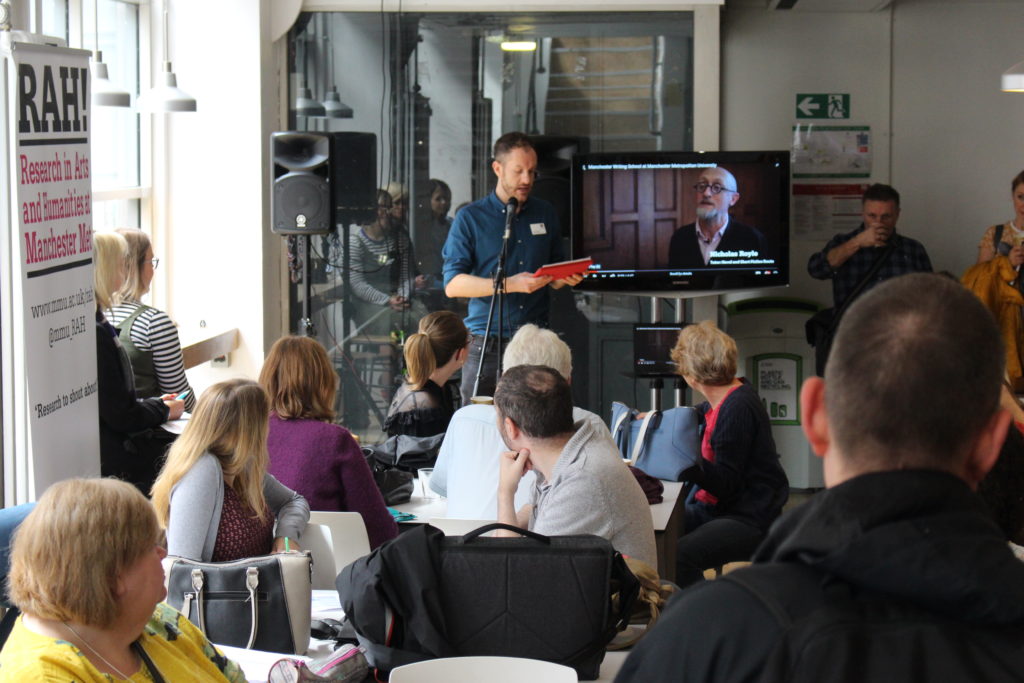 Taking place across two days, the event offered participants an introduction to a taste of life at the Manchester Writing School, including a wide selection of specialist workshops, masterclasses and industry talks from lecturers, practitioners and special guests.

Organised by Manager of the Writing School James Draper, the intensive programme included a carousel of sessions running concurrently, allowing attendees to choose from options geared towards the the Writing School’s MFA and MA Writing for Children and Young Adults, Poetry, Novel, Scriptwriting and Creative Non-Fiction routes.

Poet and Academic Director of the Writing School Adam O’Riordan opened the proceedings by acknowledging many of the familiar faces he saw among the attendees. The Summer School, he said, represents “such a exciting time, because it shows the variety of what we have to offer here at the Manchester Writing School”.

Tina, an aspiring writer, spoke highly of McMillan’s poetry class, telling aAh! Magazine: “I was blown away to be honest, it introduced me to stuff I’d never usually read and [made] me think about things differently.”

The second set of morning sessions gave writers the choice between ‘Responding to Setbacks as a Writer’ with senior lecturer in Creative Writing Catherine Wilcox, ‘When Poetry Gets Visible: ten years of artistic collaboration with the Poet Laureate Carol Ann Duffy’ with visiting teaching fellow Stephen Raw and ‘An Introduction to Scriptwriting’ with professor of scriptwriting Simon Stephens.

Emmanuelle Lipari, an MA Creative Writing student in attendance at Simon Stephens’ workshop, told aAh!: “I liked that he said you always need a creative spark before starting something – I like that, it was definitely true for me.”

When asked what he hopes aspiring writers learnt from his talk on writing adaptations for the screen, Hugh Stoddart said: “Don’t start too soon… what is your approach? Know your approach before you begin writing.”

The first day drew to a close with one group taking a “wandering workshop” around Manchester with senior lecturer in Creative Writing Paul Evans, another group taking part in ‘Speaking in Tongues’, a workshop with visiting teaching fellow Amanda Dalton, and another in ‘How (Not) to Write Bad Dialogue’ with senior lecturer in Creative Writing Catherine Wilcox.

Catherine Wilcox told aAh! that the most rewarding aspect of the Summer School was the sense of equality among all attending. “We’re all writers, and we’re all engaged in this process,” she explained.

James Draper and Adam O’Riordan welcomed the writers back on the second day, with O’Riordan emphasising that attendees should make the most of the opportunities available on the final day, particularly with the potential to network with fellow writers: “You’d be surprised what could happen in the breaks in-between.”

The first sessions of the day were ‘Developing a Pamphlet… and from pamphlet to first collection’ with Royal Exchange Theatre House Poet John Fennelly, ‘Thinking and Writing Ecology in and beyond Children’s Literature’ with senior lecturer in English Ellie Byrne, and ‘Social Media for Writers’ with visiting teaching fellow and writer Zahid Hussain.

Speaking of the biggest benefit of the summer school, Zahid Hussain told aAh! that the two day course allowed writers to “hear the latest advice, tips and techniques”.

Anna Blackwell, an MA Student in Creative Writing, pointed to Zahid Hussain’s lecture on using social media as her favourite thing about the summer school. She said, “It was great to see how it could advance my career.”

Danny, a fellow student, expressed similar sentiments, noting: “I went into it thinking I’d know most of it, but I barely knew any of it,” pointing to Zahid Hussain’s advocacy of Twitter lists as a notable example of something he’d never considered utilising as a writer.

After a short break, the groups again split off into different sessions. visiting teaching fellow Paul Dowswell looked at the use of language in his ‘Historical Fiction: Blighters, bounders, scamps or scalliwags: Getting your era to feel right’ masterclass, Creative Writing lecturer Anjum Malik used cake to inspire creativity in her poetry masterclass, ‘How To Have Your Cake And Read It’, and writer Ed Caesar gave a talk and took questions from his audience on non-fiction writing in ‘Reading and Writing Creative Non-Fiction’.

Sandra Quarcoo, an MA Creative Writing student, expressed appreciation for Ed Caesar’s talk, commenting: “It was very informative, and it was great to hear from somebody who’s been in the non-fiction writing industry for a while, and who’s still working.”

Attendees reconvened after lunch for the afternoon sessions, which included the options ‘A Zone Of One’s Own: How writers get into the zone’ with lecturer in Creative Writing Rachel Genn, ‘Shake it up: Creative risk-taking in poetry’ with visiting teaching fellow Mandy Coe, and ‘Taking it Further: the critical-creative or practice-based PhD at Manchester Met’ with senior lecturer in Creative Writing Livi Michael.

The final picks of the day included a masterclass with lecturers Anjum Malik, Rachel Genn and Livi Michael presenting ‘Show Don’t Tell: Seeing the World Through Your Characters’ Eyes’, a talk based around performance poetry with Royal Exchange Theatre House Poet Mark Pajak called ‘Preparing for Performance, Voice Skills and Using a Microphone’, and an illustrated talk on small press publishing with reader in Creative Writing Nicholas Royle.

As the event drew to a close, the group moved over the road for drinks in The Principal Hotel’s elegant Refuge Bar, where they could discuss what they’d learnt and raise a toast to another successful year.

Manager of the Writing School James Draper told aAh! that the benefits of the Summer School for writers are numerous: “For current students, it’s a good get-together to mark the end of the academic year. It’s also a chance to step outside their comfort zone and try something from beyond their core studies. For online students, it’s a good opportunity to meet each other and their tutors face-to-face. For those attending from outside the University, it’s a good chance to see what goes on in the school. It’s a very exciting model, and we hope it shows what we do best to everyone who attends.”