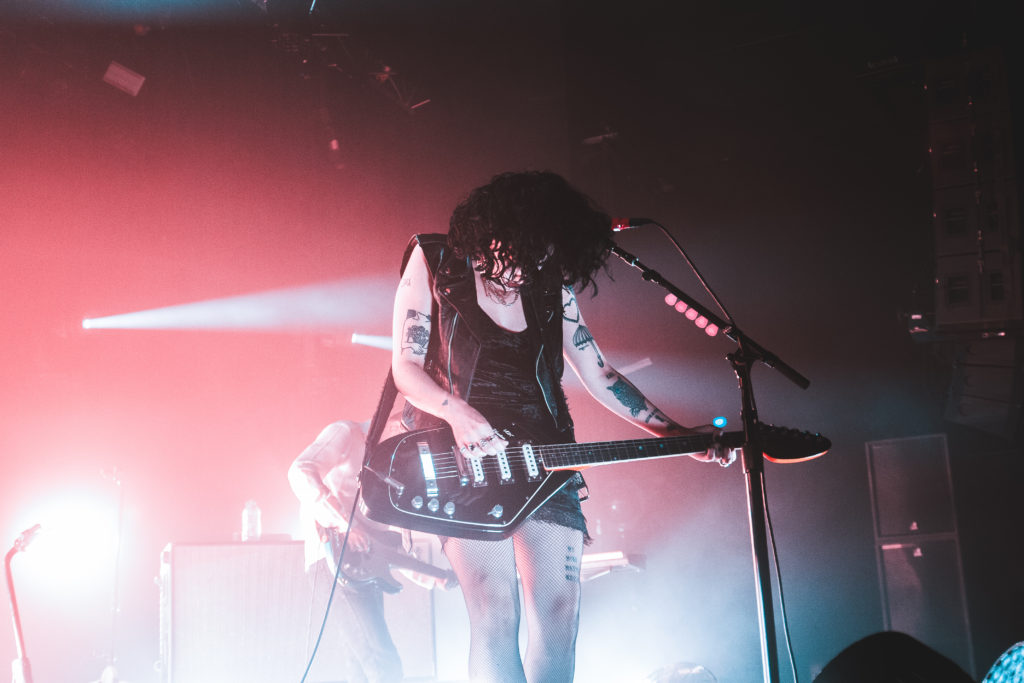 Manchester Academy 1 is the largest venue under the Manchester Academy umbrella. It has a 2300 capacity, and acts as a stepping stone between the more intimate venues such as the Deaf Institute, and higher capacity settings such as Manchester Arena. Headliners Pale Waves are at an exciting mid-way point in their career and certainly showed that they’ll soon be heading for stadium status as they smashed their biggest and best headline tour to date.

Sole supporting act Sports Team attempted to warm up the crowd before Pale Waves took to the stage. This rising band may owe their explosive sound to their 6 members and it may work exceptionally well in the studio- however, live it causes competition between vocalist Alex Rice and the instruments surrounding him. Their opening track ‘Margate’ had the melodic hard-hitting upheaval of ‘Fell In Love With A Girl’ by The White Stripes, and Rice delivered the attitude and stage presence to carry the track- even spitting water out like a dolphin to capture the audience’s attention.

However, one of the main criticisms of the band was the disparity between the energy created by Rice and the rest of the band. Their talent as musicians is undeniable- lyrically their work is beyond their years as  demonstrated from their debut EP ‘Winter Nets’, dripping with dark humour and cynical joy – however, the slick playing captured while streaming it just wasn’t perfectly executed live.

Rice played his part well by swinging his mic stand around on ‘M5’ and ‘Stanton’, and his vocals shone during the track ‘Here It Comes Again’. The drums didn’t overpower his voice to the same extent as some of the others, and it was a pleasure to listen to. Furthermore, penultimate track ‘Kutcher’ which was named BBC Radio 1’s Hottest Record in the World was a fan favourite and had everyone jumping along to it. Despite most tracks sounding very similar live, the atmosphere was something else. Their set was a collection of tracks which were perhaps best enjoyed by a die-hard fanbase, the centre of the audience certainly waved their hands in the air throughout.

However, they are still early in their career and have so much more to offer – it’ll be exciting to see what they attempt to conquer next.

After selling out their final date on the tour well in advance, Pale Waves stomped onto the stage with nothing to prove. After quickly growing a fan base, signing to a major label Dirty Hit and working with Matty Healy they have quickly surpassed most goals that other artists can only dream of. From the instant emergence of their figures in the soft yellow light, an ear-splitting scream from the audience signalled energy which had to be heard to be believed. From the opening track ‘Eighteen’ to the last strums of their final track of the night ‘There’s a Honey’, they easily captured you in the web of emotion they expertly weaved.

Songs causing you to dance and cry, were featured ten-fold with everything in-between. The goth-pop quartet took their hometown show by storm. By the end of the second catchy track ‘Kiss’ the audience had already formed a mosh pit and were hanging onto every word from vocalist and guitarist Heather Baron-Gracie. Baron-Gracie played the enigmatic front-woman perfectly, especially when she was free sans guitar to bound around the stage and stir the crowd into even more of a frenzy. The Drummer, Ciara Doran, accompanied by funky guitarist Hugo Silvani and bassist Charlie Wood.

“Television Romance” was performed under pink lights to depict a bubblegum romance, and continue the disco theme.

The next track, ‘When Did I Lose It All’ saw Baron-Gracie bathed in angelic yellow light and as she moved to stand on the barrier to show her connection with her audience as she clutched a pride flag. Her voice carried across the venue as she announced that she “will always preach to the day I die, be who you wanna fucking be”. They have cemented their name in modern music for celebrating individuality and positivity. Her accessory maintained its position by her side as she danced with it and reminded us that she “played [their first gig to around 20 people and half were family. How things change”. Family and friends are one of the main inspirations behind her music. We were treated to a solo version of ‘Karl (I Wonder What It’s Like to Die’) by Baron-Gracie. Before she played she announced that “it meant a lot to her and for her family, and Karl too.” It was the emotive song of the set, and under a single spotlight, the whole crowd was swaying from the raw intensity of the track. Her voice melted like honey.

Before the last performance on their ‘My Mind Makes Noises Tour’ was over, the catchy upbeat tracks of ‘Noises’ and ‘There’s a Honey’ as encores were a lasting reminder of how far the band has come. Baron-Gracie again reminded the crowd of how they started at the small venues, and demonstrated their new heights as she climbed on the raised area of the drums with her hands shaped like a heart – their whole set had been loved from start to finish by all.

It won’t be long before we’re hearing more from Pale Waves – undeniably one of the biggest names in indie-pop. They announced during their set that they are returning to the studio soon to create their second album. It’s sure to be on par with or even better than the last. If you ever get the chance to attend one of their shows be sure to take the opportunity, as it’s not only a gig but an unmissable experience dripping with synth and community spirit.