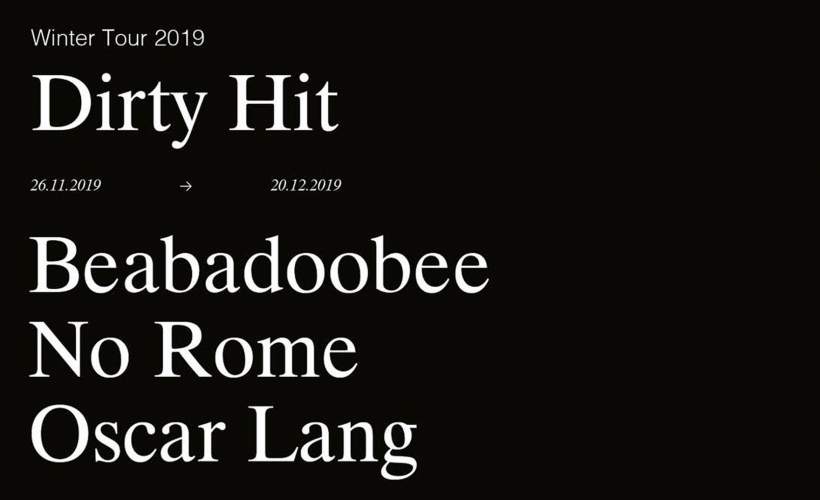 Industrial chic Manchester venue Gorilla made the perfect setting for the penultimate show of The Dirty Hit Tour, boasting three of the brightest talents on their roster. Not only was the show sold-out, but the queue snaked around the block, which must have only bolstered the confidence of each act.

As soon as Oscar Lang and his self-proclaimed ‘Wang Gang’ were introduced, with the lights bouncing off the disco ball, the party had officially started. Lang kicked off the set with a carefree track ‘Hey’, which emphasised his soft vocals. Before they could charge into ‘French Girl’ Lang ordered the crowd to “shake [their] hips” making sure the crowd were having the time of their lives. An almost electronic bop, Lang has a penchant for combining narration and singing into his tracks.

During his set, Lang even shared an anecdote involving a life hack, as he claimed he realised a “few years ago at a show in Wembley that at a show you have to go crazy” and “if you’re embarrassed in front of your friends you’re with the wrong friends“. He revved up the audience for track ‘Trash’ and even began the fluffy jumper equivalent of a mosh pit. Lang‘s energy bounced off everything with the flashing white lights matching the beat. He danced so crazily you couldn’t help but worry he was going to trip over the mic stand as he swung his mic around, every bit the showman.

Lang asked the audience, “Who’s excited for f****** Christmas?” and reminded them he’d released a song called “Christmas is home”  two weeks previous. With red and white lights and shiny guitar notes, it was the perfect track for spreading a sprinkle of festive cheer. The soft and shiny keys matched the light-hearted playing, and the energy demonstrated was commendable.

As Lang sang in his first track ‘Hey’, he “doesn’t care for Instagram likes”. He even sported a Simpson’s top throughout his set. He’s doing it all for himself and this is the crux of why he’s going to do well. He’s a breath of fresh air in the artificial plasticated music industry and a true credit to Dirty Hit.

No Rome a.ka Guendoline Rome Viray Gomez is undoubtedly a melodic genius. He and his bandmates have undeniable skill in bringing Lang’s electronic tracks to life in the live setting. First track ‘Do It Again’ saw the crowd already going crazy as Gomez wove his melodic web, matched with equally capturing lyrics such as “She’s looking in the bottle for her dreams of a Benz/ She said she wouldn’t do it with friends”.

Track ‘Stoned In The Valley’ featured a slightly darker tone, as Gomez’s glasses and earrings twinkled in the light. He drew you in as he slowed down singing “I’ve been taking drugs again” and” I’m just a lonely boy”, whilst the crowd had their arms in the air relating to this almost angsty teenage anthem. In ‘Saint Laurent’ it contained a section that the crowd could join in with, they clapped the beat for Gomez, which he led to him deeming it as ‘sick’. It was a summer festival-ready tune, warming up the dark winters night highlighted by the flashing blue and yellow lights.

The track ‘All Up In My Head’ was announced by Gomez as a song “About getting stuck in my head, don’t usually play it but tonight I thought I would”. It also saw the teamwork skills of the band as Gomez and multi-instrumentalist bandmate Mark Lawrence Paredes played the keyboard systematically. It was an upbeat, electronic track which met the fine line of being catchy without being repetitive. Last track ‘Narcissist’ a collaboration with well-known label mates The 1975 left Gomez announcing that “STG you guys are f***ing sick” and “I have one request from a fan, so to the girl who’s on FaceTime called Maddy” and he made a heart shape with his hands to her on the phone, as he dived into the sultry-pop number.

True performers through and through, their skills have shown how they can translate each electronic fuelled track to the live performance. Their original tracks are catchy and memorable and are sure to ‘get all up in your head’ too.

The days of shunning ‘Bedroom Pop’ are long gone, especially if London based artist Beabadoobee has anything to do with it. She also goes by the name of Bea Kristi when she’s not bringing her signature mix of grunge and glitter to the masses. There’s more to her than another online breakout Fairy Tale. She may have gained critical acclaim for her first offering ‘Coffee’ two years ago, but her third and latest release ‘Space Cadet’ is a step away from her stripped-back roots and shows a more electric guitar-focused vision of Kristi. She’s clearly hellbent on taking us with her for her journey to stratospheric success.

Kristi began her set with bubblegum-grunge track ‘Are You Sure’ from her latest E.P Space Cadet. It was met with much appreciation from the crowd who were lightly moshing from the offset. Pavements front-man dedicated track ‘I Wish I Was Stephen Malkmus’, which illuminated Bea with blue outer space-themed lights as she nailed her solo. Throughout the set, Kristi also revisited her past E.Ps which put her name on her map. ‘If You Want To’ from her Patched Up E.P expressed a more stripped back vibe and conveyed feelings of growing relationships.

Her debut track ‘Coffee’ made a well-deserved appearance, and Kristi announced it’s arrival with it being a “really old one and if you know the words sing it”. It was a melodic soft track, and a reminder of how far Kristi has come.

Penultimate track ‘You Lie All The Time’ featured crashing drums (which matched the flashing blue and red lights) and Kristi’s heart-felt vocals “But I can’t complain/ ‘Cause I’m just afraid of losing you.” Final track ‘She Plays Bass’ is perhaps the best-known track off her newest E.P and is dedicated to her bassist and friend Eliana Sewell. It’s a 90’s inspired banger. The high-powered energetic track rubbed off on the audience as they eagerly tried to open a circle pit too early, leaving Kristi to tell them “wait a second bruv” as she counted them in and tore the stage up.

Dirty Hit is one of the fastest progressive labels and is acute at capturing the future movers and shakers of the industry. Each artist proved they had earned their place on the tour, and this is only the beginning. Gorilla has previously showcased acclaimed artists such as Sam Fender and tonight’s offerings will surely follow in their footsteps.