You are here: Home / Culture / Manchester / Music / Interview: Beabadoobee On Getting Advice From Matty Healy, Multiple Award Nominations and Singing in Talent Shows 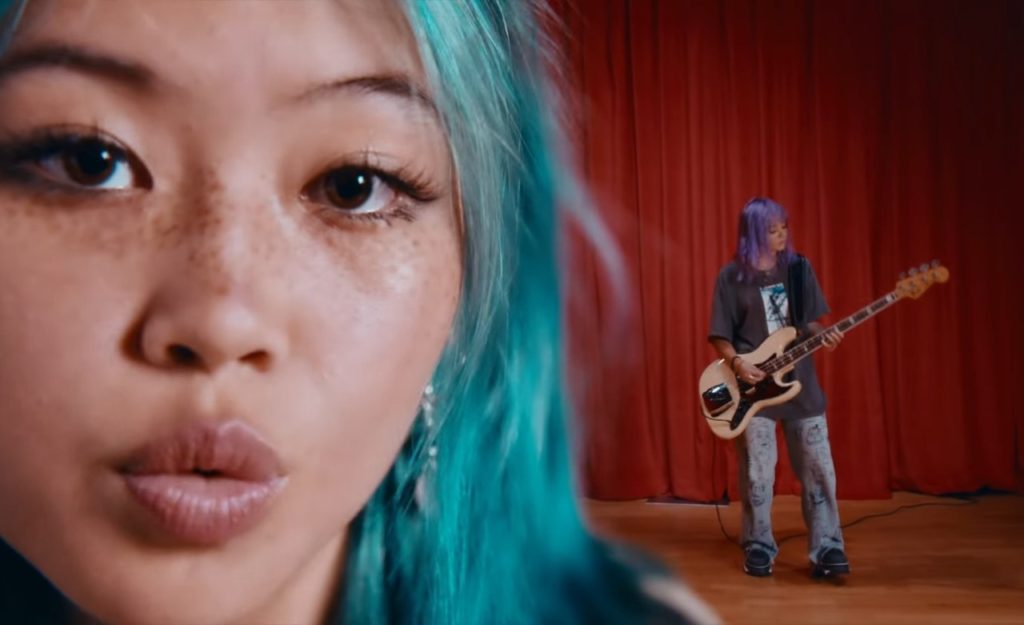 Not many people can say they’ve spent their 18th birthday signing to Dirty Hit, touring the world in less than a year and seeing their idol turn up to one of their shows. Beabadoobee, a.k.a Bea Kristi has achieved more in little over a year than most artists have in their lifetime and this is just the start of her rise to supernova status.

aAh! Magazine was lucky enough to talk to Beabadoobee before her penultimate show on the Dirty Hit Tour at Gorilla and find out about her first taste for the stage singing Britney, being nominated for a Brit award and her transition in live music taste from One Direction to Tame Impala.

How did you get your name Beabadoobee?

“Basically, I didn’t expect any of this to happen, and Oscar [Lang], who released my music from the beginning, was like, ‘you have to have a name’. I was like, ‘no one’s gonna give a sh** about my music anyway. Just use my Finsta name cause I don’t care’. It was ‘Beabadoobee’ and like, I hated it and I’m still kind of like what the f*** is that name, but whatever.

Before learning guitar did you ever sing or perform?

“Yeah, I did a talent show that I haven’t actually told anyone about and I sang ‘Lucky’ by Britney Spears when I was 7, and I played the violin for about 7 years.”

How did you find the transition from violin to guitar?

“It’s different but at the same time, I guess it was good as it warmed me up a lot for the guitar, for stringed instruments and it does influence a lot of what I play. I have a very strict Asian mum who made me perfect the violin and play when you rest the neck and I still do that weird waterfall thing, which is pretty jokes but yeah.”

Also, your music videos appear to be quite cinematic and match your music, do you ever keep ideas for the video in mind when writing songs?

Has your songwriting process changed from when you first started writing songs?

How have you found the transition from being a solo singer-songwriter to playing in your band?

“I honestly think it’s been the best. I still write my own music and write the chord progressions at home, but now I can rehearse with the band or just play it and they know what to do. I can see it as an actual song and I have more of an idea how it’ll turn out. It’s great because I have a producer called Pete, and Joe who co-produces. They can now collaborate with the band and be like I found this bass part, do you want to add something to it? That’s what [bass player] Eliana and Pete did for ‘She Plays Bass’.”

Also, with signing to Dirty Hit with Matty Healy on their roster, who you’ve previously said you used to be obsessed with – what’s the best advice he’s given you?

“The best advice with music that I always do because we have so many long drives, is to listen to my music as if I didn’t write it. You know how you listen to music to get inspired by it? Listen to your own piece of music as if it isn’t yours and then get inspired by that. I’ve been doing that a lot, and it’s been helping me.”

You’ve previously said you’ve been inspired by label mates Heather [Baron-Gracie] from Pale Waves and Amber [Bain] from The Japanese House, would you ever like to collaborate on anything with them?

“Oh yeah, 100%! I think it’s really cool that they are both front-women in a band and are really badass. I think they’re incredibly talented and I’d love to collaborate with them. I also like the fact that there are more women fronting bands, playing guitar and rocking out – Being in that kind of scene so having them two from the same label as me, it’s sick.”

Also, how do you feel about being named as one of the BBC’s Sounds of 2020 and being nominated for a Brits Rising Star Award?

“Really strange. ‘Cause like, I came into this not expecting anything and kind of just… not seen it as a joke but as a side-project, and not taken seriously. Now I do take things seriously, ‘cause I love what I do and I write music ‘cause it’s like second nature for me. So when I got nominated, it was strange but I was genuinely so grateful… grateful for everything that’s happening to me at the moment.”

You’ve also already got a big year ahead of you next year, going on tour with The 1975. How are you feeling about that?

“I’m so excited! Just to even watch them play every night, that’s what I’m most excited about. Also, just like learning from Matty [Healy] and kind of gaining all the advice that all the band members give me, and learning how to perform on the stage like the 02. I think it’s gonna build me as a person and as an artist, so I’m excited for that.”

That sounds cool. Also, how do you think you accumulated so many followers so quickly-do you feel it was through touring, uploading your music online or through social media?

“I actually don’t know, I think that since the American tour and the U.K tour I have gained a lot of followers. I think it’s with the help of Claire [E. Cottrill a.k.a Clairo] and knowing that you’re playing on stage to Americans, who don’t know your music and who find me out through that. That’s when the followers started coming in. But when I released ‘Coffee’ people started noticing me and that’s when I gained followers. Before I released music I did have a following and I think it’s just because I posted random s*** all the time, like I literally posted whatever I wanted.”

Would you say that you still have that freedom now after being signed?

“Oh yeah, no I can post anything I want! Now I guess my life is about music and everything I post about is about music. Cause that’s just my life now, and I’m not complaining as I think it’s the best.”

Do you ever get time for anything else outside of music, do you still keep any hobbies up?

“Oh yeah, like I still hang out with my boyfriend [Soren] and go to the cinema, and chill out at his house. But I do see me writing a song as a hobby still, it helps with my mental health a lot. Just to get everything out.”

What’s your favourite show you’ve played so far, which you’ve thought ‘this is the show’?

“I really liked Glasgow to be fair, Brighton was really special, Cardiff was great. Every show has been pretty frickin sick. Hopefully, people get down in Manchester. I’m excited!”

You should be! Also, can you tell us more about the potential new album too and anything which you’ve been working on?

“So I’ve been currently working on writing and I think I’m going to record it next year and be released next year. A lot of things are coming next year, so I’m really excited. I think everyone kind of expects me to go the certain route I chose for Space Cadet and I want to do that but I also want to do a mixture of everything which I did throughout my discography. You know, stripped back songs like the stuff I had in Patched Up and Loveworm. It’s very kind of atmospheric and then Space Cadet where it’s all super ‘bandy’. So it’s going to be a mixture of everything, and I can’t wait!”

Do you have any particular New Year’s Resolutions this year?

“New Year’s Resolutions… maybe, to just know how to balance things, like balance my own time and music, career and stuff like that- and hanging out with Soren and s***. Just staying happy and positive.”

How have you found having to balance everything with the tour?

“It’s been hard like I’ve been enjoying every day of this tour. At first, touring was so hard, but now I Iove it!”

Also talking of live performances, what was the first one you saw?

“[Laughs] One Direction! It was jokes, I was like 13 I was obsessed with Zayn [Malik] Like, it was sick. I remember lining up for ages. Then the next show I went to was Tame Impala. That was f***ing cool!

Actually, how did you find the transition going from One Direction to bands like Pavements?

“I don’t even know! I’m so confused like I tell everyone “One Direction”, but how the f*** did that change?! I don’t know, I guess I grew up and I was obsessed with Green Day, very shortly after One Direction so it kind of just changed a lot like that. Then the Pixies, all that. I was obsessed with The Cure and The Smiths. Now I’m really into to Sub-Pop 90s.”

“It was him! It was honestly him. Stephen Malkmus came in for a handshake right and I saw him, and I just collapsed on him. I was like “Oh My God!” Like, let go of all my weight with my feet just dragging on the floor. I was obsessed with him!”

That’s really cool! You’ve been nominated for BBC 2020’s ‘Ones to watch’, but which artist would you say made your year this year?

“Oh, I don’t listen to artists who are now… wait I know Alex G released an album this year. I was obsessed with it. Alex G has always been one of my faves ever, like ever. He was a very pivotal artist in the way I create music and inspired me a lot. The album he released this year was amazing.”