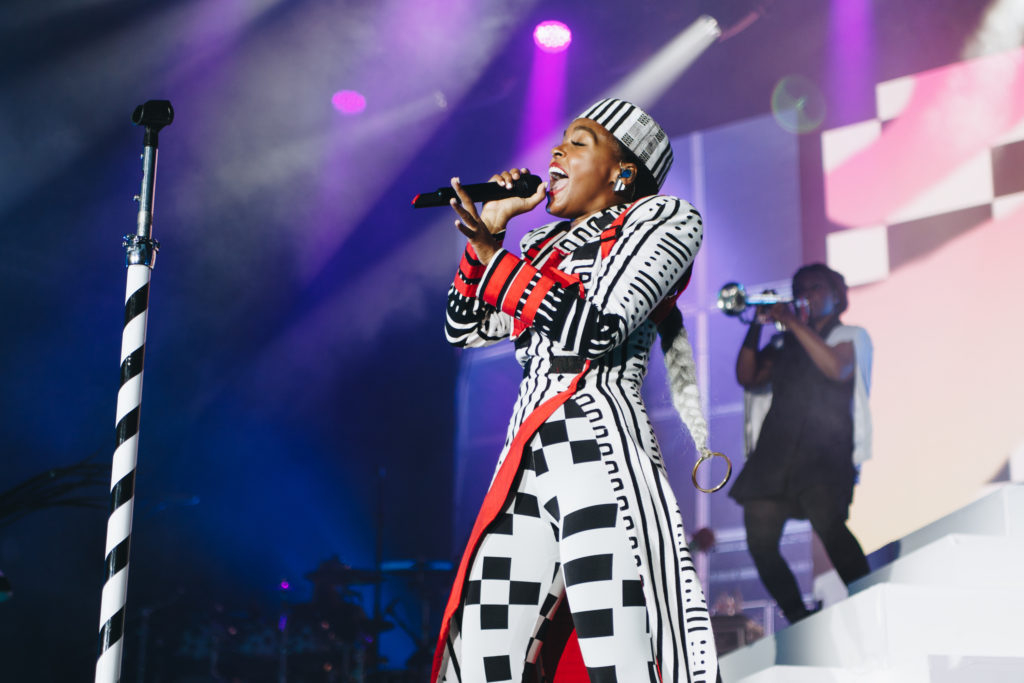 Arriving in Manchester after playing one of the most talked-about sets of Glastonbury Festival the previous weekend, Janelle Monàe turned the Castlefield Bowl into a giant celebration of inclusivity, soul, dance and future-funk that left the audience screaming for more and launched MIF 2019 in spectacular style.

Since her debut in 2010 with concept album The ArchAndroid, Janelle Monàe’s career has soared with multiple Grammy nominations, production and acting credits helping to establish her as one of the foremost artists in modern culture today. 2018’s career-best album Dirty Computer reached the top ten on both sides of the Atlantic and firmly established her as a global superstar with a powerful voice and a visual aesthetic to match.

Using just the bare minimum of set design – a white staircase, a sparkling microphone stand and some costume changes (including those trousers from the ‘PYNK’ video), Monàe and her supremely talented band and dancers put on a show of exhilarating power and energy. The entire set is a relentless party from first song to the last with dazzling choreography, virtuoso musicianship and moments of joyful audience participation, including ‘I Got The Juice’, when she pulled people out of the crowd to dance with her on stage, and the sea of phone torch lights that lit up the arena during the surprise rendition of Prince’s ‘Purple Rain’. Saving the best till last, Monàe demonstrated her absolute power and control over the audience during the encore by commanding the whole audience to crouch while she climbed the stage barriers and crept through the crowd to the middle of the arena before the final chorus exploded in a blast of pure euphoric energy.

Monàe stands head and shoulders above the contemporary pop landscape in 2019. A captivating amalgamation of Prince, Grace Jones, James Brown, psychedelia and sci-fi and a beacon of feminism and sexual progressiveness, she is also quite possibly the best live performer in the world right now. If you get a chance to see her, do not miss it.