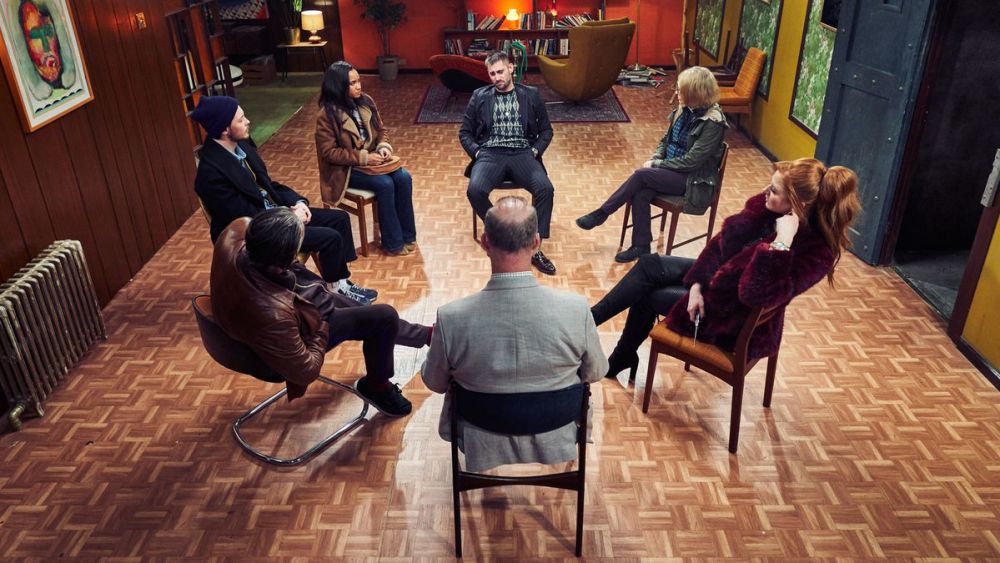 In the first twenty-five minutes of this film, there has been a fight in a strip club, a banging soundtrack, a political assassination, international subterfuge and Gary Oldman. Taking all this into consideration, why am I so bored?

Killers Anonymous is a film which has no idea who to imitate. I get, and embrace the fact, that all art is theft and any film worth its salt will have clear nods to its influences dotted throughout. However, this is a film which wants to have the plot of John Wickand Free Fire, to have a script written by Bruce Robinson and Robert Rodriguez andto be directed by Guy Ritchie, Matthew Vaughan and Jim Jarmusch all at once. The result is not lush with genre detail and film geekery, but confused and leaden. Its visual sensibility feels out of season, trying to incorporate John Wickneon, Ben Wheatley brown and Vaughan’s trademark golds and ambers. It is jogging behind three bandwagons, which now lie abandoned in a ditch.

The script misfires like a muddy rifle. The key to black humour is that the subjects being mined for mirth are never leeched of their power or darkness. Withnail & I is relentless in showing how the bumbling alcoholic will destroy himself and Dr Strangelove ends with those wacky buffoons in the war room exterminating all humanity. In the case of Killers Anonymous, the laughs have all the depth and complexity of a dead baby joke. All of this could have been overlooked if the characters themselves had an ounce of humanity and characterisation, but they all appear as bad as one another. Seeing that the central premise orients around a killer’s support group, one can reasonably expect some overlap, given that not many people do take life. Yet having soft-centred button men Leandro (Michael Socha) and Ben (Elliot James Langridge) amid calculating vicar Joanna (MyAnna Buring), psycho-sexual doctor Calvin (Tim McInnery) and complete fucking lunatics Krystal (Elizabeth Morris) and Markus (Tommy Flanagan) does not provide the full-spectrum, Seven Psychopaths look at the profession of killing that it thinks it does.

If any of you have looked at that cast and shook your head in disbelief, then you aren’t alone. To be fair, this is not their fault (except for Sam Hazeldine, who has the least convincing portrayal of an American I’ve seen since Jean Reno in Leon: The Professional). Oldman’s expression is one of a man wondering who he must sleep with to get out of this film, him being a recent Oscar winner and all, and the rest of the cast make do with what little they are given. I mentioned Jim Jarmusch before and I believe that this must have started life as a talky-talky arthouse flick in the manner of Ghost Dog: Way of the Samurai or Dead Man, hence the strong ensemble cast. This idea, I suspect, was trampled over by new trends, influences and, dare I say it, financiers.

The trailer asks, “When you’re in a room filled with killers, who can you trust?”

Upon finishing this film, you’ll barely attempt to respond, “Who cares?”