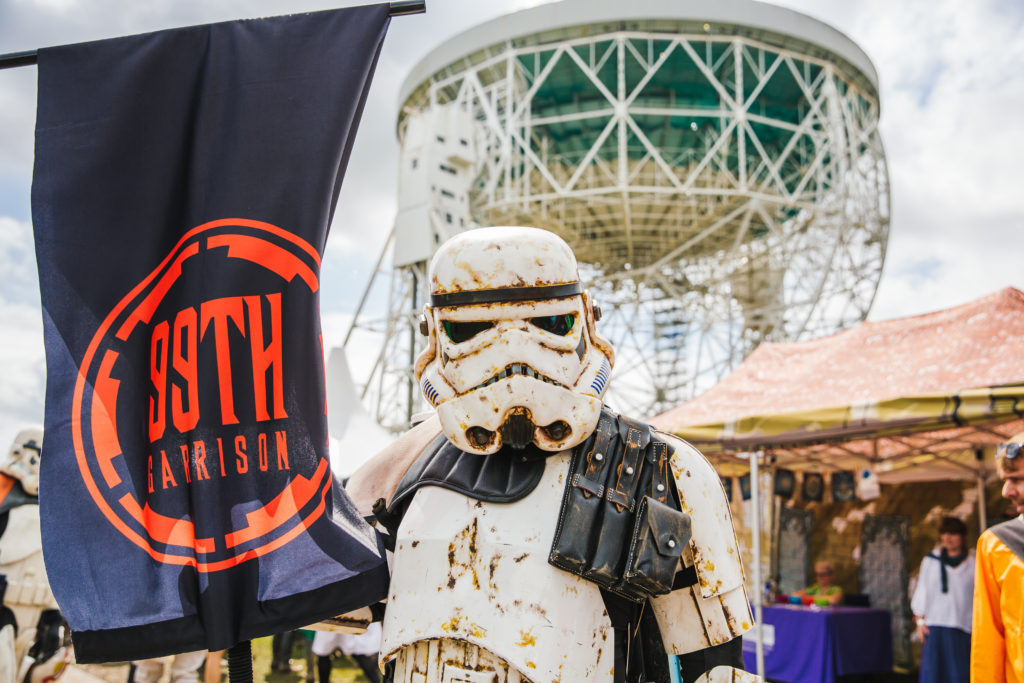 The Saturday at Blue Dot marked the 50th anniversary of Apollo 11 and mankind taking its first steps on the moon.

We marked the occasion by starting the day with a vegan katsu curry for breakfast, catching some incredible musical acts, and watching a special screening of Apollo 11, all under the shadow of the Lovell Telescope, which captured that historical event half a century ago.

A highlight of the day included Henge, whose midday set on the Lovell Stage introduced festival goers to a new genre of music ‘cosmic dross’, the apocalypse of Venus, and a demand to stop the manufacturing of weapons of war and, instead, colonise space. You couldn’t pick a more perfect setting for them.

Other top performers on Saturday include Easy Star All Stars with their collection of dub covers, Henge’s DJ set at the Deep Space Disco, and Jarvis Cocker’s latest project, Jarv Is. Jarvis had an awkward dad-like quality to his performance, asking members of the crowd what their greatest fears were only to be met with on-the-spot bemusement.

However, his final track Cunts Are Still Running The World was a comical reminder of the dire state of British and global politics.

Without a doubt, the absolute crown jewel of the weekend: Kraftwerk. The German electro pioneers could not have been a more fitting headliner. 3D glasses were scrambled out so everyone could appreciate their full 3D show, which attracted what seemed to be Bluedot’s largest ever crowd.

We found ourselves in a good position, but anyone far back enough would have had a poor view and a less immersive audio-visual experience.

Following the iconic act, which was made all the more magical with the Lovell Telescope’s projections syncing up with the set, late night boogying was provided by 808 State and David Attenborough’s Jungle Boogie on the Orbit Stage and Deep Space Disco respectively.

Saturday was closed of with a very special screening of Apollo 11 (and another big portion of cheesy chips), which was introduced by the composer of the film, Matt Morton.

The film was made entirely of archived footage and newly-found 70mm film from 1969. It featured no narration or interviews, and was a truly awe-inspiring way to see out the Saturday night and mark Apollo 11’s 50th anniversary.