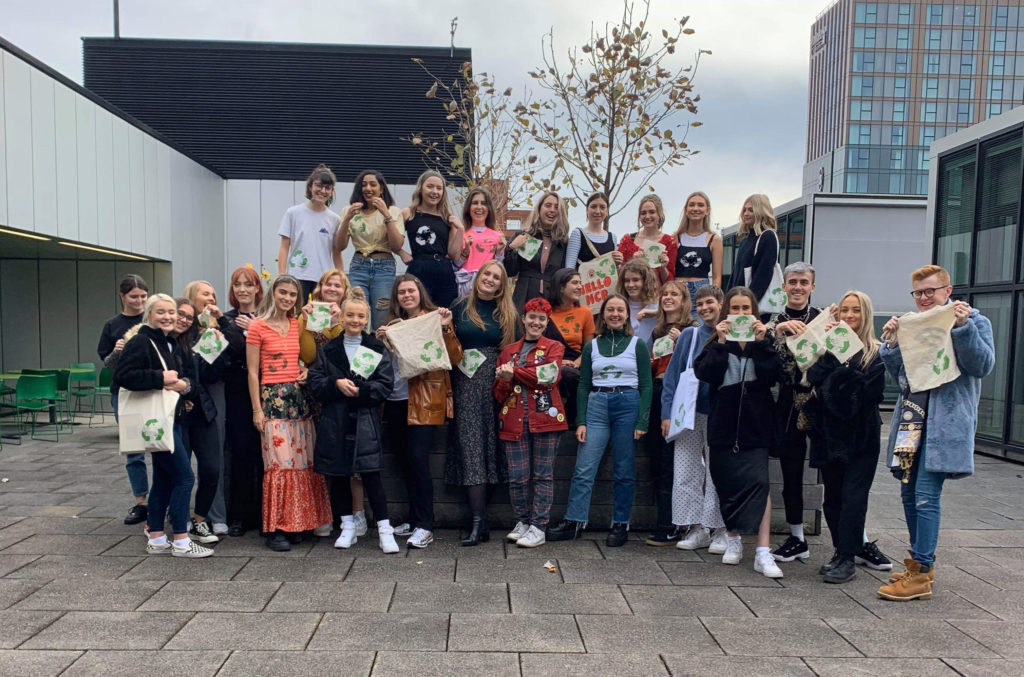 The most recent project for Manchester School of Art Textiles in Practice student, Leigh Deans, is all about boycotting fast fashion.

Her work has led to her organising her very own protest, held on the rooftop terrace of the Manchester School of Art building this week.

With a turn out of around 35 people wearing clothes branded with Deans’ own logo, the protest caught the eye of bystanders; one even asked if they could join midway through.

We spoke to Deans ahead of ‘Dress to Protest’ to find out about the inspiration, intention and driving force of the protest:

Thalia Carr: So tell me about your project, what’s driving it forward?

Leigh Deans: I was looking into how people in third world countries are used and exploited for garment working and I was trying to look into how we can help them. Brands like H&M and Topshop are always bringing out new trends every week rather than the two seasons a year that we should have. By trying to reduce and reuse materials instead of constantly buying new things, a consumer will be more aware of what they’re buying into.

TC: It’s such a good idea to make people more aware of this, how did your idea become an organised protest?

LD: To be honest it was very random. I wrote down all my thoughts and the one thing that stood out was that you need to do the extreme to create a movement. I didn’t want to just draw and make stuff, I wanted people to be talking about it and excited about it.

TC: So it just naturally formed into a protest, I love that! What would you say was your main aim for the protest?

LD: I’m just trying to educate people, I didn’t really know a lot about it until I started researching so I want to pass on what I found. I feel like now if I buy anything new, I feel this guilty.

TC: I think a lot of people are feeling that guilt more and more now, especially because of climate change and sustainability protests. I know you’ve asked for second-hand clothes to be handed in, what kind of things have you had?

LD: A lot of t-shirts and tote bags, mainly fast fashion like Primark and old pyjamas.

TC: Has there been a lot of donations so far?

LD: Yeah actually, I’ve had about 17 pieces handed in and I’ve only been printing for 2 days. I hoping to have at least 30 different pieces by Monday for the protest

TC: There’s been a lot of people talking about it, they all sound really excited!

LD: I’ve tried to spread the word and put the logo around uni so more and more people notice it and talk about it. Glad it’s worked!

With such a good turn out and a lot of talk around the university about this protest, hopefully, this is the first of many strikes held by Deans.