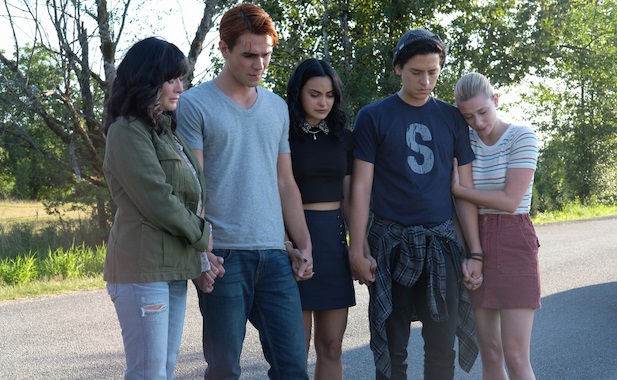 The cast of Riverdale paid a heartfelt tribute to fellow actor Luke Perry’s untimely death in the first episode of season four, which aired last week.

Perry, aged 52, also known for his role in 90210, died from a stroke in his LA home on the 4th of May this year. He was mourned by the cast of the American television series Riverdale back in the spring, but the first episode of season four called “dying a hero’s death” was also dedicated to the actor’s character, Fred Andrews.

Due to the shocking nature of Perry’s death in the middle of production, there was no mention of his character in the third season of Riverdale, other than references to him “working away”. Molly Ringwald’s character – Mary Andrews, Fred’s ex-wife, stayed “in town” to look after their son Archie Andrews instead. A number of Perry’s scenes were also removed and the character was written out of the show following the actor’s death.

Fred Andrews died pushing a woman, played by Shannen Doherty, out of the way of a speeding car in the new episode.

During his speech at Fred’s funeral, Archie said: “His spirit and his memory lives on, in this town and in everyone he has ever met. Fred Andrews will always be a part of Riverdale”.

In a conversation between The Wrap and Roberto Aguirre-Sacasa, one of the writers and producers of Riverdale, it was revealed that Perry had wanted his previous co-star Shannen Doherty to be on the show, but nothing ever transpired.

“Over the seasons, Luke and I had talked a lot about trying to get Shannen on the show, and the timing never worked out”, Aguirre-Sacasa told The Wrap.

He said when they were working on the show they “knew that there would be some characters outside of [their] cast of characters that would be involved.”

“We thought that, rather than have another actor play that, we thought it would be nice if it was someone he cared for in real life — and he cared so deeply about Shannen.”

Fred Andrew’s funeral took place on the 4th of July in the episode, the same day Cheryl Blossom’s brother Jason was murdered three years prior.

The writers of Riverdale decided to not launch any major storylines in the first episode of season four, as they wanted to focus on Fred’s death in order to pay respect to both the character and the actor.