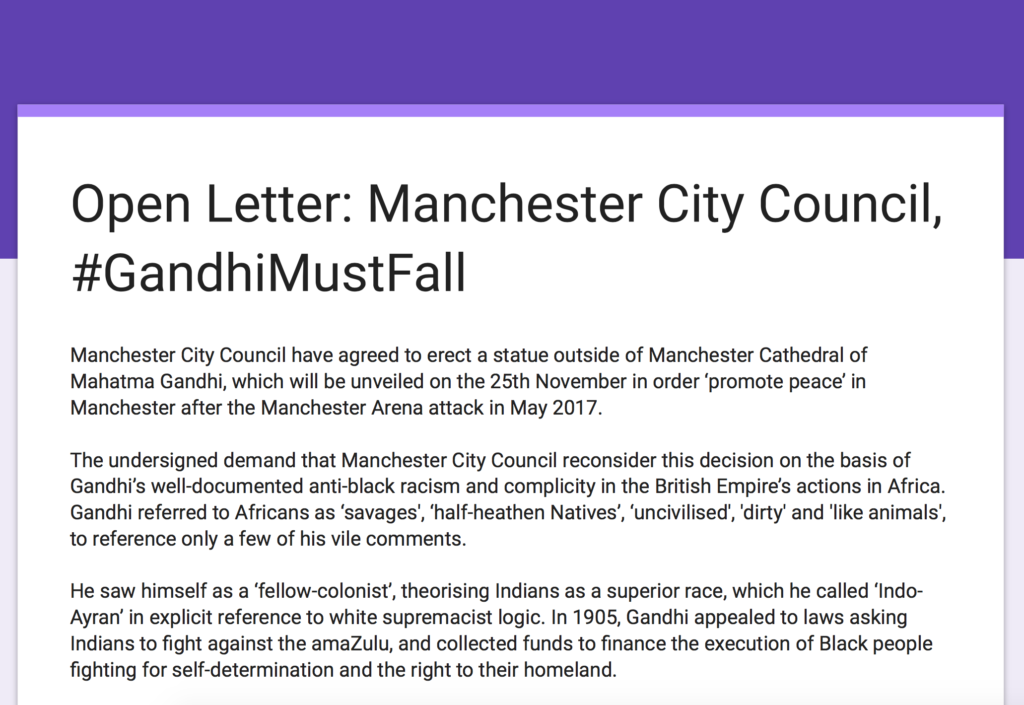 Students have published an open letter addressing Manchester City Council to demand that plans to erect a statue of Mahatma Gandhi outside Manchester Cathedral are scrapped.

The open letter calls for Manchester City Council reconsider the decision on the basis of “Gandhi’s well-documented anti-black racism” and “complicity in the British Empire’s actions in Africa”.

Authors of the letter, including University of Manchester Students’ Union Liberation and Access Officer Sara Khan, call on the council to reconsider its decision and instead “redistribute these funds to instead commemorate a Black anti-racist activist with connections to Manchester, such as Olive Morris or Steve Biko”.

They also call for the council to release a public statement “acknowledging Gandhi’s anti-black racism” and issue an apology for approving a statue that is “an insult to the Black community and the Kashmiri community in Manchester”.

The letter also states: “In modern times, Gandhi is used as a propaganda tool to cover up human rights abuses by the current Indian government under Modi, which is engaging in an effort to erect Gandhi statues globally to create an image of India as an anti-imperialist state.”

“We demand that Manchester City Council refuse to be complicit in this, especially given the city’s history of anti-racist action, and to stand in solidarity with Manchester’s Black and Kashmiri communities.”

The 9ft statue was approved by Manchester City Council in August and is set to be unveiled on 25th November.

Shrimad Rajchandra Mission, a worldwide spiritual movement based in India, proposed the statue. The group were inspired by the people of Manchester for their “strength, decency and community” in the aftermath of Manchester Arena attack which killed 22 people.